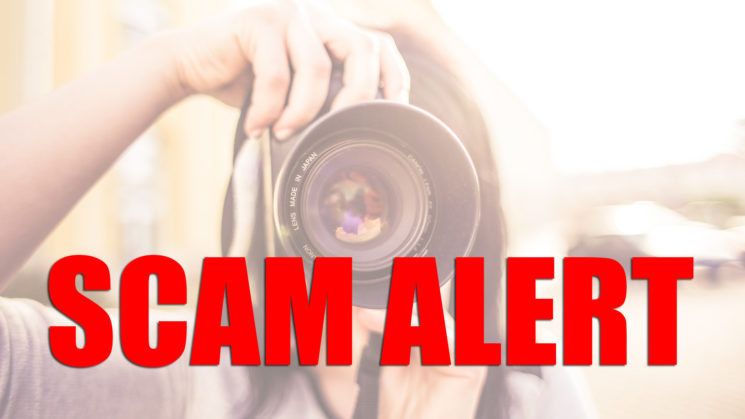 British Columbia-based wedding photographer was recently a victim to a scam which left her in $4,600 debt to her bank. According to the Better Business Bureau (BBB), she is not the only one. The same kind of scam has cost victims close to $5 million this year, so photographers, pay close attention.

The photographer, Esther Moerman, told her story to Global News. She says that someone texted her to ask about her wedding photography services, claiming that their daughter was getting married in Vancouver. After making an agreement, she asked for a down payment of $700 and a signed contract. The scammer then mailed her a check in the amount of $5,500, which is more than her actual rate. And this “overpayment” is actually the core of the scam.

The scammer told Moerman that it was “an accounting error,” according to Global News. They reportedly told her to send the remaining funds to the third party – the wedding caterer. She agreed and made a mobile deposit through her bank. She says that it showed $5,500 in the green in her account, and then she sent the money over.

However, a few days later, the check bounced and it was determined to be fraudulent. And it appears that this “overpayment” or “overspending” scam is a fairly common practice among scammers. As I mentioned, it has cost victims almost $5 million this year. The scammer pays for a service or product with a check in the amount higher than agreed. Then the victim returns the remaining funds, and once the check is deemed fraudulent, the victim is left with a debt to their bank.

Moerman says that her bank credited her $900 as a goodwill gesture, and this amount was never sent to the fraudster. However, she still owes $4,600. “I’ve had my business going for three years with many ups and downs and this is by far the biggest down point that I’ve had,” Moerman told Global News.

Unfortunately, there are all sorts of scams people will come up with to take your money. But overpayment is always one of the signs that something is fishy. Global News reports The Canadian Anti-Fraud Centre’s recommendations for increased safety. They recommend that you should protect yourself by knowing who you are doing business with. They also warn that overpayment is a suspicious sign, and note that you shouldn’t accept checks for more than your selling price. On top of this, the BBB also warns that “a legitimate company will never ask someone to forward money.”

Is it worth going into debt to buy gear?

This woman went $10,000 into debt after trying to be famous on Instagram