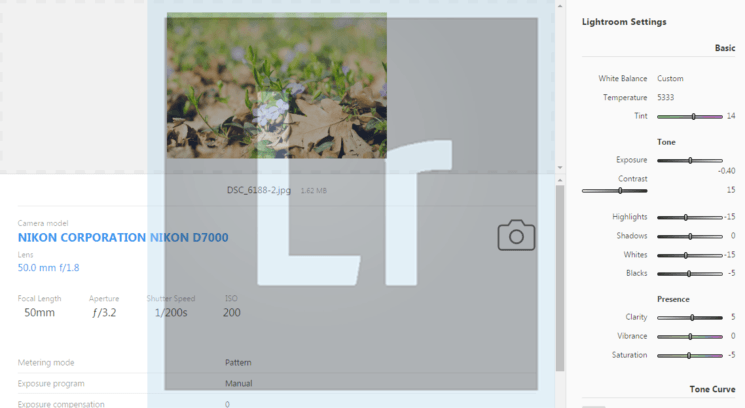 If it happens to you to see a photo and wish you could recreate the look, you will find this website really handy. Piotr Chmolowski has launched Pixel Peeper, a website that reads EXIF data from JPG image and instantly shows what process was used for editing in Lightroom, as well as the camera settings. We chatted with Piotr about his project and the plans for the future, and it seems there will be a lot more useful stuff for photographers on this website.

As Piotr explains, when he returned to taking photos after a long break, he was amazed by the editing skills of the photographers whose work he admired. He would often ask himself “how do they do it?” and realized that the info is, in most cases, right in the file.

Since Lightroom saves all the adjustments in EXIF data by default (unless you disable it), he used this data from other photographers’ photos to experiment with his own images. Eventually, he built a website that scrapes this data in a matter of seconds and shows how a certain photo was edited.

I must say, I find Pixel Peeper very user-friendly and simple, and I even like the layout. I asked Piotr about some future development plans, and first of all – does he plan to make it mobile friendly. Currently, some users complain they can’t use the app from their phones, but Piotr says he’ll be working on this feature:

I wanted to release the first version as soon as possible and mobile-friendliness wasn’t a priority for me, as I anticipated it would be a desktop tool. But it seems that people want to be able to use it on mobile, so I’ll try to work on that as soon as I get a chance.

What I noticed on Pixel Peeper is that you can only download a photo from someone’s website or photo sharing page, and then upload it and get the readings. So I asked Piotr if he plans to make possible that the Lightroom edits are read by pasting the image URL. It would be much faster and handier. Piotr knows this, and he says this is on top of his TO DO list. So, I guess we’ll see this quite soon.

This concept isn’t entirely new. For example, Capture Monkey’s Preset Ripper does the same thing, but it functions as a Lightroom plugin. I asked Piotr if he plans to make something similar, and as it turns out – the feature already exists:

Currently it *is* possible to do that, but the feature is not 100% finished yet, so I’ve hidden it. If you want to download the preset, simply append “.lrtemplate” to the URL, for example: https://pixelpeeper.io/r5c3fd2y.lrtemplate

Personally, I quite like this idea, because it allows you to learn different Lightroom editing processes. You can go step by step to copy the look, and understand which setting does what. Even the creator of the website himself says he’s learned a lot about it this way. If you were wondering if it’s possible for Photoshop – it isn’t. As Piotr explains, this is because Photoshop doesn’t embed this kind of metadata.

Although this website is really neat, and about to become even better, there’s one limitation (but it can’t be attributed to the developer). Some social networks and websites remove the EXIF data from photos, so you won’t have any readings. I think it’s the same for Flickr, as I was unable to copy the editing style of my own photos. Still, you can use photos from many other websites. And of course, you can use your own photos if you want to recreate a certain look. Either way, I believe you’ll find Pixel Peeper useful, both as a learning tool or as a shortcut to the desired look of your photos.

PresetPanda lets you convert your Lightroom Presets over to Adobe Camera RAW (and back!)
« Microsoft’s Surface Pro scores 0 out of 10 on reparability test
How to build your own DIY car photography rig for under $50 »