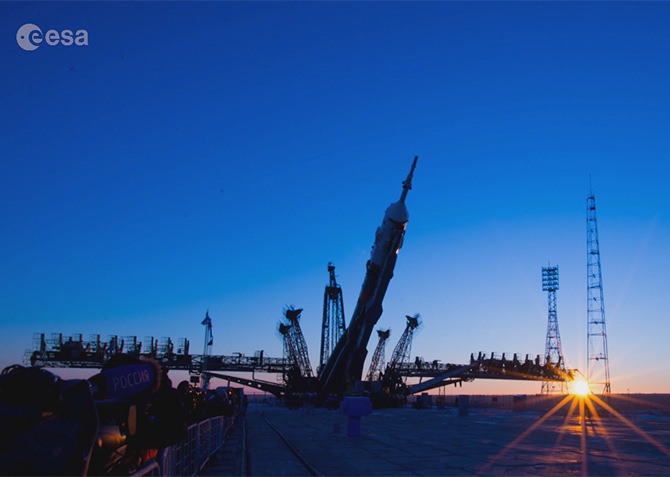 Commemorating one month since British astronaut Tim Peake launched into space, the European Space Agency uploaded a cool time lapse showing the preparation and liftoff of the massive rocket.

Launched along with Peake were NASA astronaut Tim Kopra and cosmonaut Yuri Malenchenko.

See the Soyuz TMA-19M spacecraft and rocket being rolled out to the launchpad and lifting off:

The team was launched into space on December 15, 2015, and Peake is scheduled to stay onboard the International Space Station for six months as part of the Principia mission.

Just six hours after launching from Kazakhstan, the 7-ton spacecraft arrived at the ISS where the passengers were welcomed by two cosmonauts and NASA astronaut, and one of our favorite space photographers, Scott Kelly.

The ESA say Peake will run over 30 scientific experiments for them and the UK Space Agency and “will take part in many exciting educational activities around the Principia mission, aimed at sparking the interest of young children in science and space.”

According to the ESA, Peake is up to some pretty exciting experiments up there:

“Principia will see Tim working on dozens of experiments for researchers on Earth as he orbits our planet at 28 800 km/h. Highlights of his scientific roster include growing crystals and blood vessels in space, simulating atomic structures and charting areas in the brain as they adapt to stressful situations.”

While Tim Peake and the other astronauts up in the ISS might have spectacular photo opportunities of Earth, they’ll miss out on the rare chance to photograph all five of the planets visible from Earth in a single shot.

« Canon’s latest creative experiment explores the idea of creating something from nothing
Quick Tip: How To Protect A Cyclorama With A Tennis Ball »