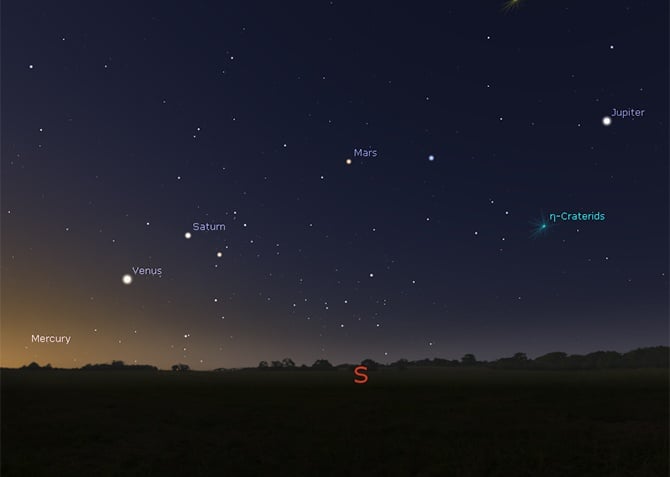 Of all the planets found in the Solar System, only five of the brightest planets – Mercury, Venus, Mars, Jupiter and Saturn, can be seen with the naked eye.

While all five of these planets can be seen throughout most of the year, as of this morning they can all be seen simultaneously as they (mostly) align diagonally in the early morning sky.

Last time this happened was over a decade ago, so ready your cameras and plan your shots.

The rare celestial event, which can be seen in the predawn sky, began early this morning and the astronomical alignment will last for exactly one month.

According to the International Dark-Sky Association (IDA), these five are the only planets visible to the naked eye as Neptune and Pluto are so far away you need a telescope to see them. The ninth planet, or eighth if you don’t consider Pluto to be a planet, is Uranus. This one is said to rarely be seen without an aid and a super dark sky, though it is widely believed many people can’t see it due to their heads being too far up their own… never mind.

In order to view the aligned planets you’ll want to have your eyes (and lens) on the sky about 45 minutes before sunrise. There are many websites and apps that will help you find out exactly what time sunrise is in your location, but I’m a big fan of PhotoPills (it’s overkill for just finding sunrise times, but it does so much more).

The IDA recommends you find the planets by searching for the brightest one – Venus, first. Once spotted, you’ll see Mercury to the left and the others to the right of Venus. Stellarium (pictured above) is a great tool to see in which direction the planets will be at any given time while they’re visible from your location.

The best viewing is said to be during the last week of January and first week of February, according to Sky & Telescope, so now is a good time to practice and try out your settings.

The early birds among you might think this is not a new sight as the planets have been visible for a while now, but those were only four of them; Mercury only joined the party this morning.

If you’re unable to get out and photograph the astronomical sight, you’ll be happy to hear it’s going to happen again in August.

This photographer takes photos of flowers and plants using UV-induced visible fluorescence, and the results are beautiful