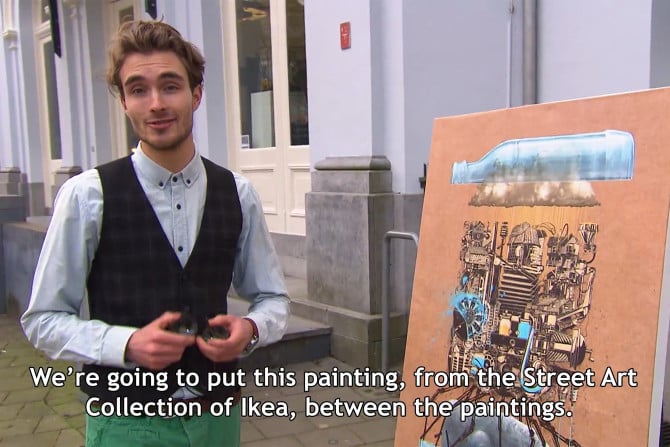 The value of art has been at the center of many heated debates, probably ever since the first piece was sold, only being surpassed by the debate on the actual definition of art and what can be considered art.

LifeHunters decided to check what happens when a $10 print from the critically acclaimed Swedish artist Ike Andrews, known to most people as IKEA, is mixed into an art collection worth millions.

Art buffs analyzed and admired the piece; some valued it in the hundreds of thousands and even millions of Dollars, but above all they proved that art is worth whatever someone is willing to pay for it.

While most people got a chuckle out of this experiment, not everybody thought it was amusing. I guess serious art is no laughing matter.

Boris of LifeHunters placed a cheap print from IKEA in the Arnhem Museum of Modern Art in The Netherlands, and asked museum goers to share their opinions about the work, its meaning and eventually estimate what it would be worth.

Assuming the print was part of the museum’s display, it received great reviews with some people even claiming to know the artist and a few of his other works.

This just goes to show the huge impact the location and context of a piece of art have on its value, and probably if it’s even considered art or not.

While I definitely appreciate good art (what I refer to as art, of course), I’ve always had a problem with the artsy-fartsy side, and this video demonstrates why nicely.

Obviously these people were not museum curators, but it still drives the point home.

If the concept of the video sounds familiar, you might have seen their video where food experts were given McDonald’s described as high-end, organic food:

As part of my photography degree I took several art classes, and quickly found myself making up nonsense to see how far I could take it with my own “art” and that of others.

I mentioned more than once that some of the ‘high class’ art nowadays would be thrown into the nearest dumpster had it been seen on the wrong side of the museum walls, and vice versa, and have wanted to try something very similar to this video.

Now that LifeHunters has saved me the time, please excuse me; I’ve got a few lecturers I need to email.

Tether Tools apologizes for unknowingly using a photo without permission