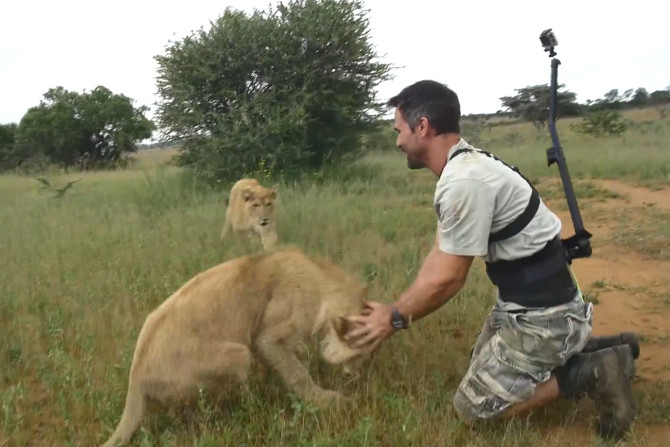 Known to many as the Lion Whisperer, Kevin uses his extraordinary relationships with lions, hyenas and leopards to draw public attention and raise awareness to their dire situation both in captivity and in the wild.

Kevin’s YouTube channel is home to some fascinating educational and behind-the-scenes videos, including perspectives that you will not see anywhere else.

In this informative video Kevin shows what equipment he uses to capture the unique footage and how it’s actually done.

Kevin provides a full breakdown of the gear used in his videos, and GoPro is without a doubt the star of the show.

The gear shown in the video includes the following:

While fun to know, and a cool video to watch, you won’t find any secret tools being revealed.

The reasons Kevin’s videos are so popular are due to his magnificent subjects, his presenting skills and knowledge and mostly his exceptional bond with these carnivores and the unrivaled perspectives he offers.

The uncommon and challenging situations in which Kevin often finds himself make the GoPro the perfect tool for the job, and this did not go unnoticed by the company.

As part of its promotional campaign for the HERO 3+, GoPro sent a team to create a 15-minute video about the Lion Whisperer and his extremely enviable life.

The video, below, was obviously filmed entirely using GoPro cameras.

Make sure you visit Kevin’s YouTube channel and Facebook page to see more of Kevin’s day-to-day work and updates, and visit his website to learn more about him and his conservation projects.

Behind The Scenes with Sports Illustrated, Will Smith and Michael Grecco