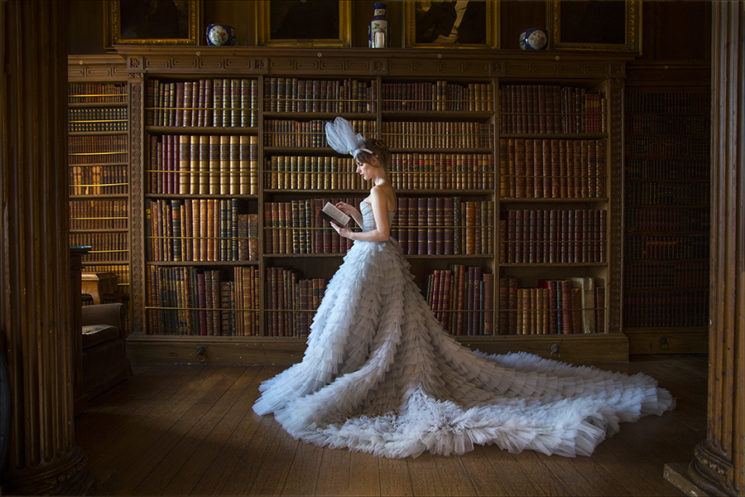 We’re now five events into Walter’s Wardrobe, with the creaky doors opening in no less than one abandoned Victorian theatre, one gothic castle and three stately homes from various periods. But what really goes on behind the wooden doors? As ‘Ruffles & Ready’ took the stage this April, I thought it was about time I explained what goes on within the Wardrobe…

Who is this elusive Walter character and what’s with his Wardrobe?

Walter is my big black tom. Hand reared from weeks old, but born to a farm cat stray, his questionable manners and anger management leave plenty to be desired. Yet there is something irresistible about him. He owns my heart, like my passion for fashion and no matter how much stress he causes, he has an innate ability of sucking me back in. Always. 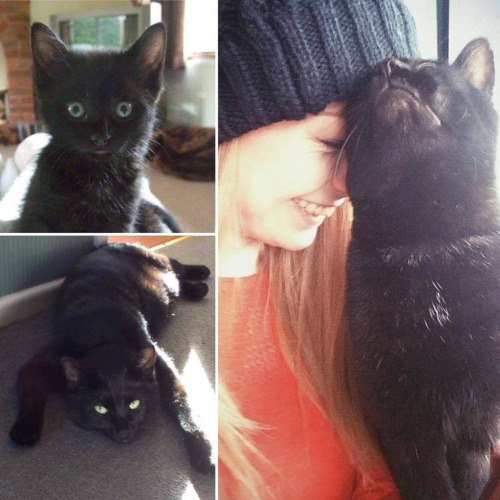 As for the wardrobe; the concept derives from the imagination of C.S. Lewis and his magical knotty pine that endorsed my childhood. As the wardrobe doors open, photographers are invited to step through the doors of reality, wade past the fur coats of normality and straight into a new kind of Narnia, shooting models in couture costume at alluring locations.

How did Walter’s Wardrobe begin?

The thing with the Wardrobe, is that it was never meant to be. I’m a qualified writer turned model, now working in a 9-5 office occupation. Hosting fashion shoots for photographers, was never my original agenda. Yet, as I tried to leave, I found myself bathing in reluctance.

I knew gorgeous models, great makeup artists, exquisite designers, fascinating locations…and a persistent desire to be involved. I don’t want to be a photographer, but I do want to make photographs.

Walter’s Wardrobe represents a natural progression; from wannabe model, to wannabe stylist and event planner. Nothing more, nothing less. 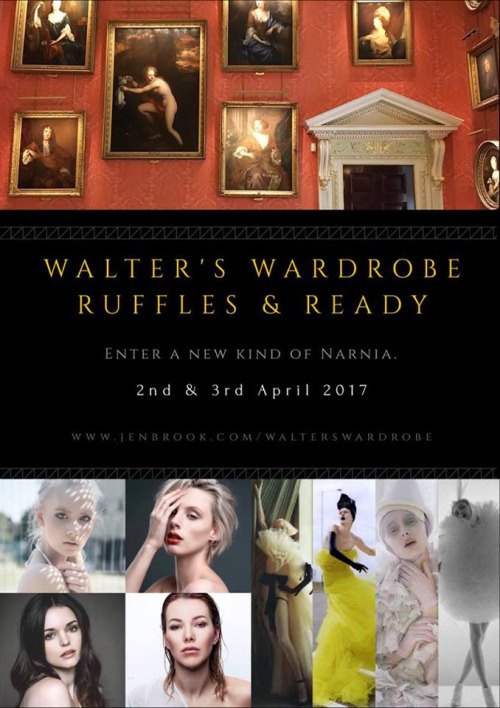 After 2016′s autumn production, House of Two Halves, it was set to be a comfortable six month break for Christmas…or so it would seem. The final cracker had barely been pulled before location scouting began once again. Plans for April were imminent; Ruffles & Ready was coming.

The venue needed to follow my strict criteria: an essence of opulence, a bit of baroque, ornate with an abundance of history. Locations with whispering walls are the places that call to me…and this one, most certainly did.

Haunted by the ghosts of the past, once again I stumbled across this location through the tragic historical stories that consume my imagination. This time, entranced by the story of two nineteenth century female photographers, who twirled in front of a lit fireplace. I learned that their creole dresses accidentally caressed the naked flames in the library…and they burnt to death, where they’d danced with nobody watching. A harrowing tale of such heartbreaking coincidence, this story could not remain a secret from the photographers within Walter’s Wardrobe.

Not only this, but the tale of Disraeli’s parrot was a key influence in the styling of the titled production ‘Ruffles & Ready’. The exotic bird was gifted to the Lady of the house by our former Tory Prime Minister of the 1870s. Presumed male, he was a finely feathered masculine beauty….until the day she laid 23 eggs in 24 days and promptly dropped dead in her cage. Although considered another tragic tale, the dark comedy of this story became me – yet another example of how life imitates art. I had to have this venue.

You may have recognised her taxidermy body, as the ‘save the date’ notice: 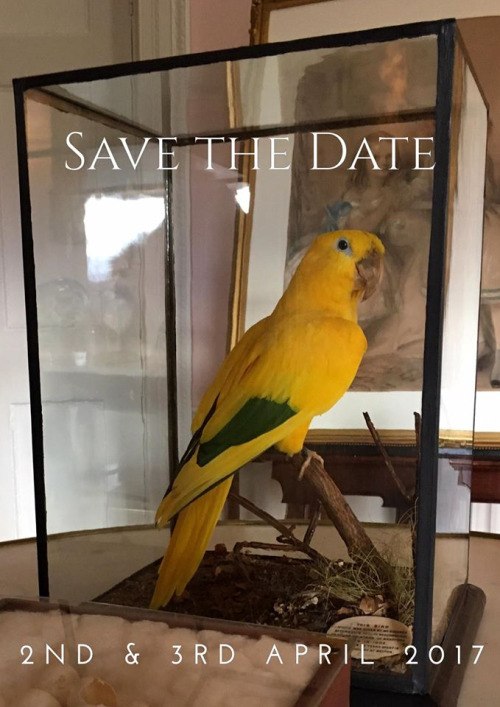 Her sorry story influenced the creation of the below image, captured by Richard Wakefield, featuring the 23 eggs that sorely killed her. 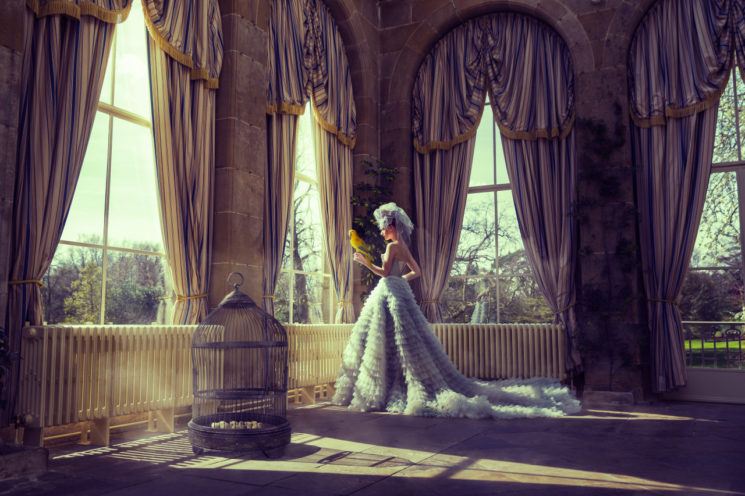 So the hunt for yellow ruffles began – not a common colour inline with my usual themes, but one that undoubtedly had to pay homage to our 137 year old deceased feathered friend.

With the tale of the two girls and the long perished parrot in my mind, inspiration and planning was freshly underway. So when I explained the story behind the search for yellow, to one of the hardest working designers I know, Mishi May kindly offered to create a brand new design especially for us. The addition of Mickey Mouse inspired ears to this outfit, was a cheeky nod to my upcoming birthday; a fortnight in DisneyWorld Orlando in no less than a dozen days from now; paid for entirely by the attendees of 5 Walter’s Wardrobe events, allowing me to reach a lifetime goal of 5 year old me. The Mickey ears remain one of my favourite looks for this reason – a commissioned product produced by Donna Graham. 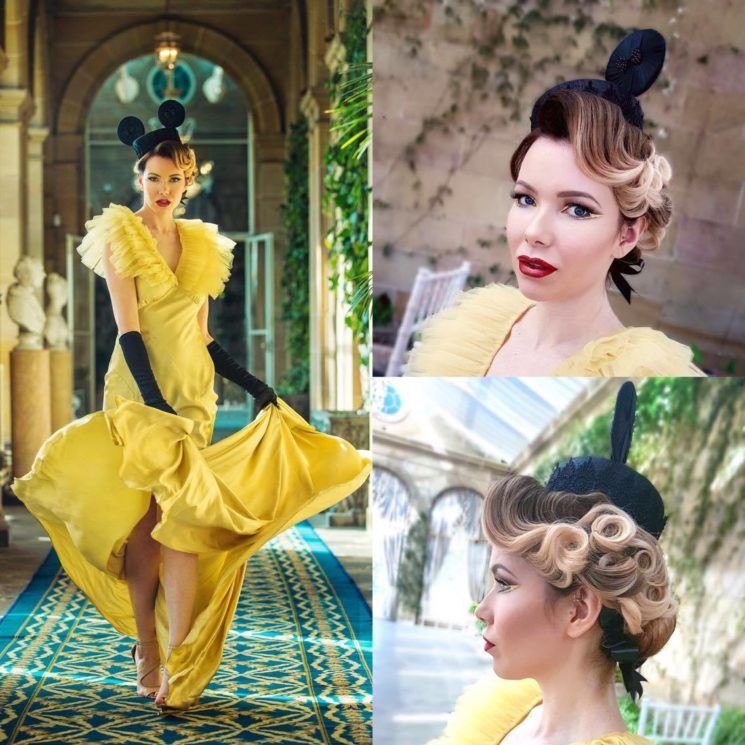 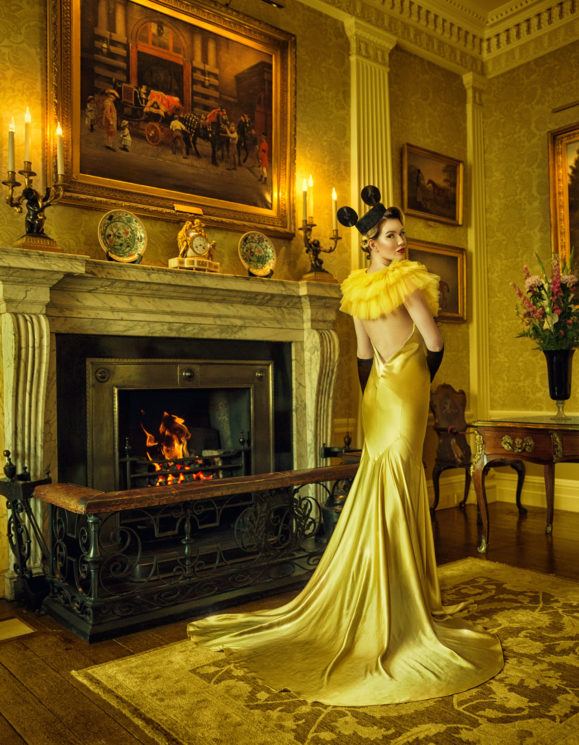 Nicky looked equally as fabulous on day one, sporting an oversized Sia homage head bow, designed by Donna Graham, with hair and makeup by Livvy Morewood. Short fashion film below by Laurent Baumann:

Following hints of bird-like Nicky, the animal theme was continued by model number two, Jodi Lakin; loosely labelled our ‘Silver Fox’ for her natural beauty reminiscent of actress, Rachel Weisz, and the heavily embellished metallic design of her dress. 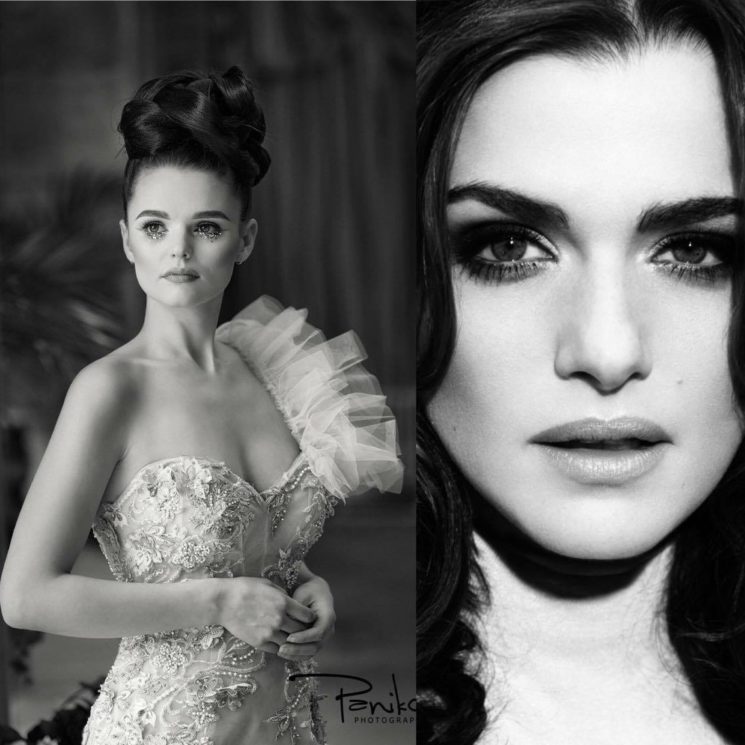 Like most of the looks featured in this production, this dress was a brand new addition to the latest Mishi May collection – made especially to meet our request dates, with an additional ruffled sleeve to fit the theme. I cannot express how hard Mishi May has worked on each and every stitch, ruffle and embellishment to create such jaw droppingly incredible designs at such short notice for us – designs that we were so lucky to shoot before anybody else. I highly recommended her on every level of talent and professionalism, plus genuine loveliness to top it off.

Basking in the light. Image by Znapps: 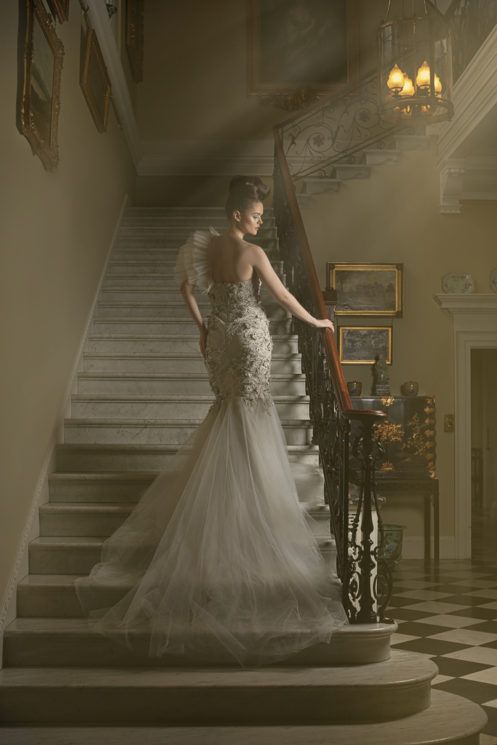 Next, we had our ultimate ruffle wonder look, (nicknamed ‘Dirty Duck Egg’ due to its colour) worn by supertrooper, Victoria Coutts. Victoria is a full time model and actress who recently completed a three month job costumed in a gut constricting corset. Unfortunately, the traditional female attire left her ribs fractured at the sternum some weeks later. So what did we dress her in? Another corset! Fearless Victoria assured us she was ok to work, however regular top ups of painkillers behind the scenes depicts what absolute superstars Walter’s Wardrobe models are – dedicated to the moment without complaint, every time.

Victoria’s look is inspired by the theme of the event ‘Ruffles & Ready’ and really was the showstopper of this production. £11.5k worth of layered tulle dripping from her tightly cinched waist, was without a doubt a wow moment, as it took 3 pairs of hands to transport this gown from set to set for the photographers.

Victoria in the library with a book…image by Bentham Imaging:

‘Dirty duck’ was accompanied by a further nod, this time to the current season. Sporting Easter bunny ears on day one, the look was accompanied by inspirations of gothic bride millinery; classic of Donna Graham’s unique sense of style, collaborated with the ethereal pale pastels that I adore, on day two. I don’t think I have a favourite between the two looks for the two days and that is why I love working with Donna! 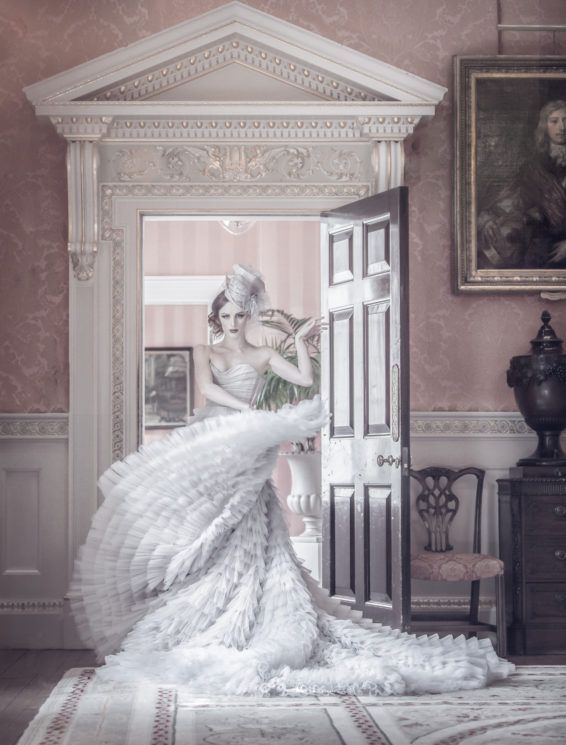 Finally, came the simplest, but my favourite look of all: our sugar plum puffball, Polish princess – Kamila.

Puffball moodboard (fact of the day – I modelled at the location featured top left, by Tim Walker, for one of Brooke Shaden’s brilliant UK retreat events…yes, I did stroke the walls): 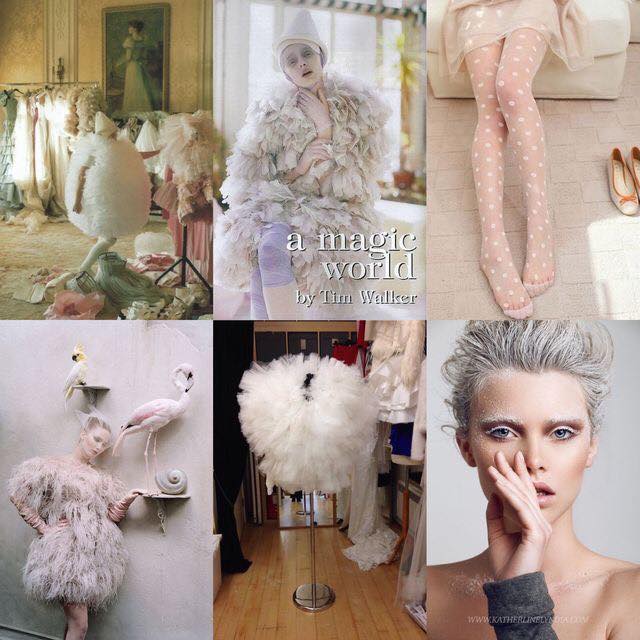 Heavily inspired by works of the iconic Tim Walker, Kamila’s look leant itself to the surroundings of nature, with hints of the seasoned cherry blossom/magnolia trees, plus the available theme of extensive ruffles. Her long slender legs created an ideal of the look I was aiming for – complemented by pom poms situated on her toes.

Height was everything for this look, wonderfully captured by Jo Rutherford, with china doll-like hair and makeup, by Abigail Pulleyn: 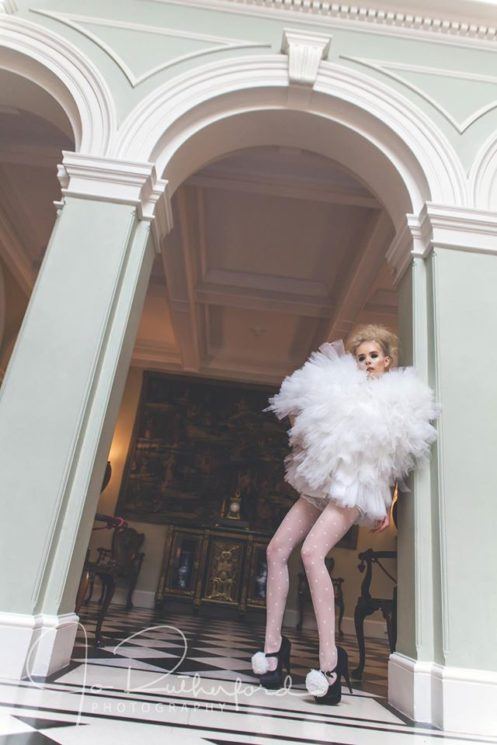 One of my favourite things about the Wardrobe, is that it’s not a workshop – there is no teaching, so there’s no style to replicate and most importantly of all; no egos to please. Yes, the model/makeup/costuming/location is provided, but each photographer creates their own series, meaning everyone comes away with their own shots. 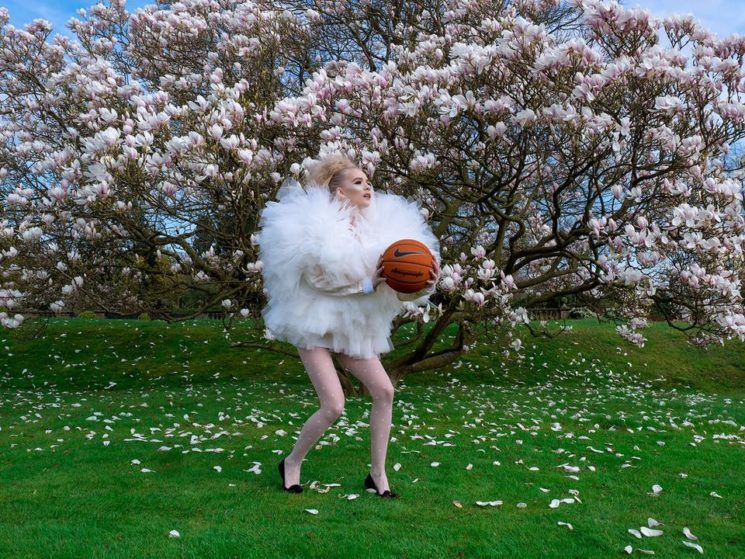 I’m not sure if I can claim the event to be a success just yet, I guess you’d have to ask the photographers about that. What I can say, is that the event went better than ever expected and I am extremely happy with the results. If that’s considered a success, then so be it!

A huge thank you goes out to all those who stepped within the Wardrobe this time, making it another sell out event. If you would like to join the next production in July, join the Walter’s Wardrobe Facebook group for first access to information here. You can also follow the work of the photographers here.

All credit to the outstanding team of Walter’s Wardrobe:

Behind the Scenes Cinematographer: Richard Wakefield.

Jen Brook is a creative fine art, conceptual and fashion model, stylist and event planner based in Preston, England. If you want to find out more about Jen and her work, check out her Facebook page and Tumblr blog. And you can get more information about Walter’s Wardrobe events on Facebook. This article was also published here and shared with permission.

Behind The Scenes: Underwater Fashion Shoot With Sharks