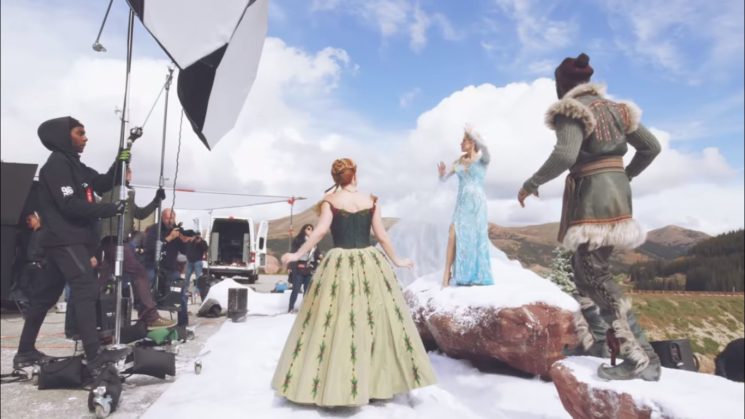 Even if you’re too old for cartoons (as if you can ever be), I’m sure you know about Frozen. In February 2018, this Oscar-winning story is getting a Broadway show. Photographer Andrew Eccles photographed the actors for Vanity Fair, and in this video, they let you take a peek behind the scenes of this photo shoot.

The Broadway cast of Frozen includes Caissie Levy as Elsa, Patti Murin as her sister Anna, and Jelani Alladin as Kristoff. Eccles photographed them exclusively for Vanity Fair at Arapaho National Forest in Colorado. The location is magical, but the team behind the shoot enhanced the magic with some props.

As they write in the video description, the fake snow they used for the photo shoot didn’t harm the beautiful environment of the forest. It’s primarily made from potato-starch and is completely biodegradable. They placed rocks and cotton snow blankets on the ground but removed them after the shoot. Here’s the final result:

I must admit I love Frozen, even though Elsa’s and Anna’s faces been all over the place for the past couple of years. I found it interesting to take a peek at a high-end shoot like this, and see how many people are involved in it: from the photographer and models to assistants creating the set. If you’d like to read more about the Frozen Broadway show, you can head over to Vanity Fair.

« 3D print your photography to make backlit lithophanes
If $5K+ for an iMac Pro is too much, it’s not for you! »