There’ve been one or two comments about the new iMac Pro since we finally got specs and prices a little while ago, so I thought I’d get my two cents in (although the beast itself is a bit more than that!).

The only thing that can kind of be upgraded in the iMac Pro is the RAM. I say “kind of” because you can’t do it yourself. The iMac Pro is pretty much a sealed box and only authorised Apple service centre can access it, so less than ideal. In fact let’s just say, you can’t upgrade it. The thing that annoys most people the most about this is that it forces you to decide what specs you want when you order it and if you don’t get what you need, tough.

So you can’t sort of dip your toe into the iMac Pro with a lower spec machine when you order it and then buy higher spec parts for it later as your needs increase. But this is how Macs have been going for almost a decade now. If you’ve been using Macs a while – and odds are you aren’t looking at an iMac Pro if this is going to be your first Mac – you know this is how Apple has been designing their computers for some time.

Maybe Apple has done itself a disservice buy calling some of its laptops “Pro machines” that aren’t as high spec’d as as Pro machine should be. But in their defence, what is a “Pro”? If a Pro is a person who makes a living from using the computer? Well then anyone from a writer to a special effects artist are pros and those two people’s needs are very different from a computer for their work.

So I think the iMac Pro should be seen in a different category. It’s not just for Pros, it’s for Pros who need the most powerful machine they can get. That also get us onto the second reason a lot of people are bitching and moaning about the iMac Pro: the price!

It isn’t cheap. Though, to be fair, I don’t know what people were expecting. When Apple announced it they said it would start at US$5K. That’s where it would START and also they were doing that really annoying American thing of not having the tax in the price (I understand why they have to do that, but it’s still annoying).

But no matter how you write it, $15K is a lot of money to spend on a single thing. If that thing was a WANT, even more so, but what if it was a NEED? Do you really need it?

Beyond the price and the upgradability, do we need the new iMac Pro?

If you’re just going to be using the iMac Pro for fun and you have that kind of money you can spend on fun, go for it. But if photography or video a fun thing you do, or even a thing you make a bit of money on the side from, the iMac Pro probably isn’t for you. It should be seen as an investment in a work tool and not just “buying a computer”.

I make my living by filming video clips and then editing those clips together to tell a story. If I have a one week shoot, that means I have about 2-3 weeks of editing to put together the story of that shoot. So you could say that about 60-75% of my billable time is spent editing video on my computer. So, you could then say that at least 60% of my income comes from using my computer. Would being able to work faster mean I could either make more money or spend more time with my family because my editing time is more efficient? You see how easily I try to justify where I am going?

But my financial controller/wife won’t let me get away with it that easily. At the moment when I am not on location and at my desk, I am working on a 2016 5K iMac with 32gigs of RAM and everything else turned to 11. I’ve had a look at the secondhand market and I reckon I could probably get about $3K for it. So that means a new iMac Pro with the config I want, which I’ll have an image of below, would cost me another $8K. Could it really be $8K more powerful and would that speed really help me work that much faster?

Right now maybe not, but I am about to make the move to an all 4K workflow. I’ve been shooting 4K for a while, but most of how I deliver to my clients is in HD. So I shoot a mix of HD and 4K. But 4K is getting to the point now where I am close to just shooting everything in 4K. I even have some projects that may benefit from a few 6K or 8K shots. So moving forward I am going to need more grunt and of course a ton more hard drives, but that’s another story.

At the end of the day, it’s a beast of a machine and it will serve those who need it really well. Yes, it’s “annoying” that you can’t tinker with the specs as you go and yes, it’s not exactly cheap (there are cars out there that are cheaper!), but if you find yourself making money from your workflow and the speed and efficiency will save you time and money down the track, what’s not to love? For me, looking to the next 2-3 years I think the iMac Pro is going to serve me very well. Now to get sign off from the wife. 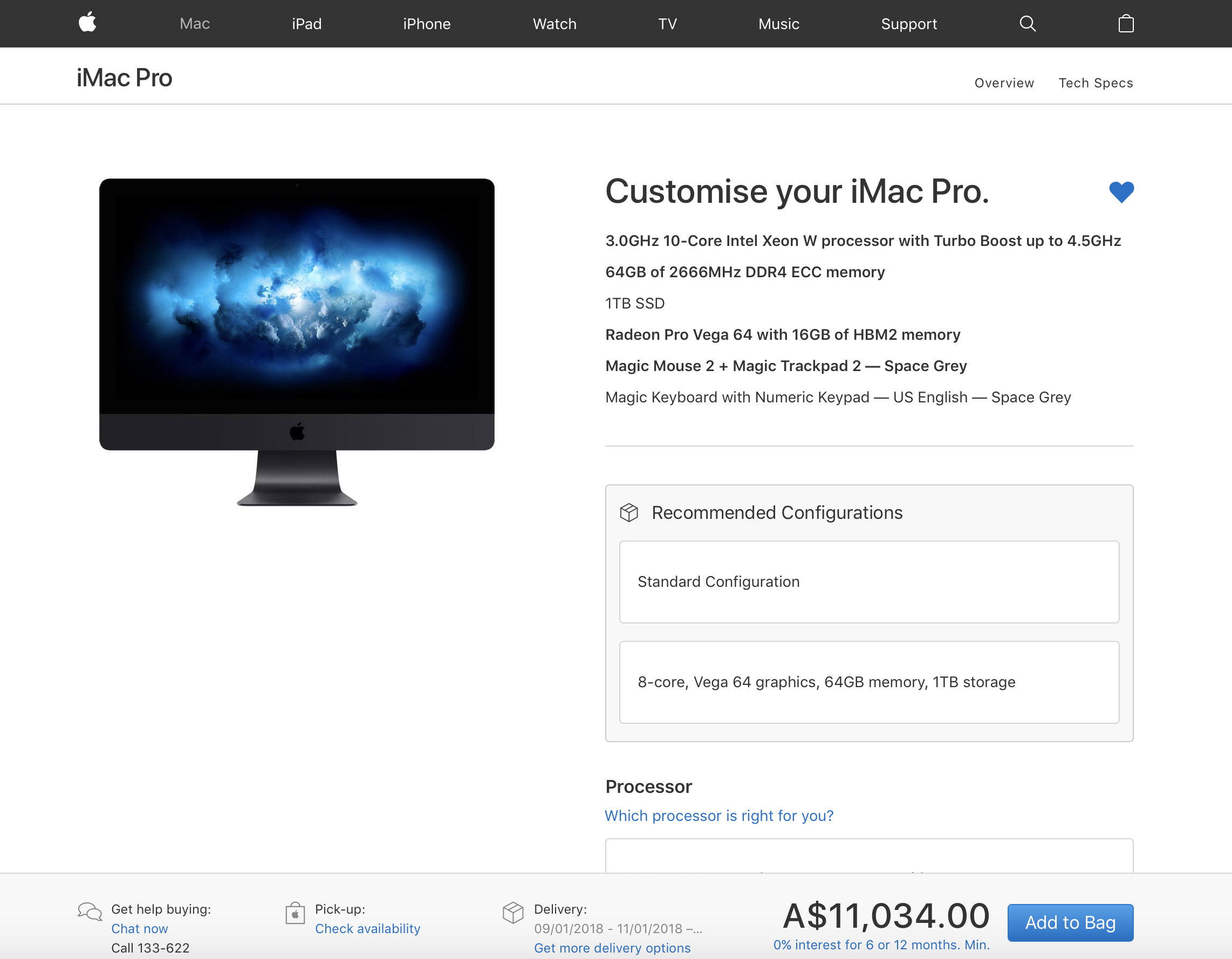 Four weeks hands on with the iMac Pro