I am not going to bore you with the how and why I was able to get my hands on a $5,000 iMac Pro for a few weeks. Let’s just say I’m glad that I’ve already had my firstborn, otherwise I think I’d be delivering him to someone else.

Let’s start with the packaging – yes I know, the packaging. I really, really wanted to not be a fanboy about this and I really don’t appreciate other reviews that talk about the packaging of a product because who cares, right?

But I have kind of a good excuse for this. The packaging is different from a standard iMac, or at least it is from the last time I bought an iMac in 2016. It looks cheaper. For as long as I can remember, iMacs came packaged in foam, this one was in kind of brown cardboard, which quite frankly looks a bit cheap for a computer that costs a minimum of $7.3K AUD. I did some research and it turns out that there is actually a good reason for this. The packaging is made completely out of recycled materials, which is nice. 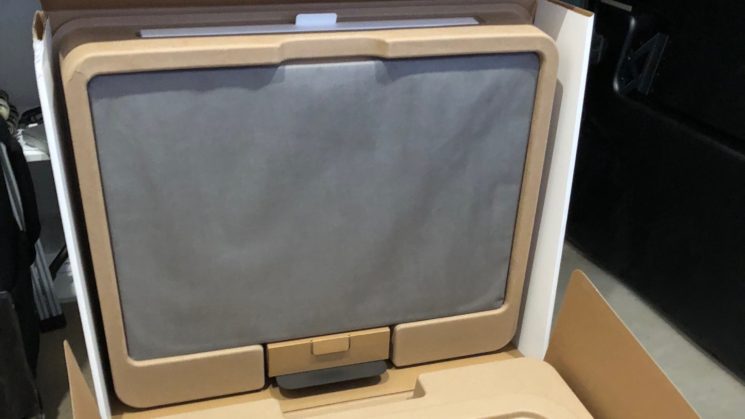 Now that we have that out of the way, I am going to talk a bit about the keyboard. ”Oh for the love of…, just get onto the damn machine!” I hear you say, but think about it, the keyboard is one of the main ways you are going to “interact” with this machine, so just hear me out. It’s more than just dark grey; the key pressure, the resistance it gives against your fingers feels… different. For lack of a better word, it feels more “springy” than other Apple keyboards that have come out since they switched to the new kind of keys. It’s a bit like pushing down on a chewy candy. Despite that weird description, I really, really like it and would like all keyboards to feel like this. I appreciate this is totally a personal taste thing, but there you go, my personal taste is for keys that feel like they have chewy candies under them. I’m as surprised as you are.

Finally, we can now talk about the actual machine and how it performs. I got the base model with no extra bells or whistles and even this thing is fast! I did the usual benchmark tests on it that everyone else has done and so I won’t bore you with them. I want to talk about how it actually works on a day-to-day use basis.

Let me set the scene of what my setup is first since I had it connected to quite a lot of stuff. I’ve got a Promise R2+ RAID connected via Thunderbolt 2 and then I have a 31mu97 4K LG screen daisy changed via the RAID.

I then have an Elgato Thunderbolt dock connected via Thunderbolt 3. Into that I have a Dell 27″ 2.7K screen along with various USB accouterments, such as Wacom tablets, webcams, tangent colour wheels, a Focusrite audio interface and another USB hub with 4 X 8TB drives for various backups. I’ve also been very kindly loaned an eight-bay Promise RAID for test/review that I’ve had running on it too.

So lots of bits and bobs hanging off it, none of which ever affected the speed/use once.

Luckily I am in the middle of a few projects that I thought would push the iMac Pro decently. I’ve just shot a cooking show that involved shooting 4K with five cameras at the same time, so a good test for live previews of a five camera 4K Multicam in Final Cut Pro X. I was not surprised, but it was still pretty cool how the machine was rendering 1.63 Terabytes of footage, while I was creating Multicam clips and then previewing, scrubbing and editing them all in real time and the machine never once missed a beat. In fairness, this was also a great credit to the eight-bay Promise, but that gets its own review later. It’s also a testament to Final Cut Pro X. Being an Apple product, the software is highly optimised to take advantage of all the speed it can squeeze out of any Mac and this Mac has plenty to be squeezed.

As for other editing aspects, colour grading, adding Neat denoise, tracking things with Coremelt’s plugins, which often can be a bit slow on other machines, nothing I could throw at the machine in Final Cut Pro X seemed to phase it.

This was actually disappointing for me. I really, really want to buy a new iMac Pro. Even though it’s super fast at doing the things I do most days, because I couldn’t really find a “limit” doing my normal work, it didn’t seem that much faster than what I’ve got at the moment.

Then, I did an animation job. I am not an animator, I normally hire an animator when my clients need/want it. I’ve got some prebuilt Motion plugins that I use for animating stuff and using them in Final Cut Pro X is painfully slow, because at the end of the day, Final Cut Pro X is not an animation application. I also decided to create some pretty big, multi-layer projects in Motion. I know other people use After Effects but I don’t! So let’s just look at it with Motion, shall we? :)

I figured this would be a good test and it was. This was where the iMac Pro got to shine. At no point did I ever have to stop, take a break and come back, because Motion had to “think” about what it was doing. Sometimes when I am working on projects with lots of elements in Motion, my machine will give me the dreaded beach ball and I have to wait, mind you, not long, but I do have to wait to keep working. This can really stymy the creative flow.

The other place that the iMac Pro showed why you would need the speed that it can provide was in render and export times. I didn’t do side-by-side tests but export times out of Final Cut Pro X were noticeably faster on the iMac Pro from what I’d been getting on my MacBook Pro and iMac. Of course, having said that, it’s not like I’ve often had huge issues with exports being slow. Most of the work I do is short-form: three to five-minute clips at the most, so they don’t take that long to export anyway.

If I was working on longer form stuff, perhaps 20-minute shorts or a full-length feature, then I think the speed advantages would really show themselves in export.

So, am I getting an iMac Pro of my own? I’m sad to admit this, but I don’t think I will, at least not for my current needs. If I was doing a lot more animation and or 3D graphics or if I was shooting more 4K RAW or longer form films, then yes I would. Without a doubt.

But for the stuff I shoot day in and day out which is 4K for capture, but 1080 for export and delivery, the setup that I have at the moment is working fine for me. Yes, the iMac Pro would be faster than what I have, but not so much faster that I can justify the investment. At the moment, I’d be better off investing in a bigger/faster RAID array than the two-bay one I have now.

Have any of you pulled the pin and got an iMac Pro. What do you think?

« Here’s how to mimic the sunlight using only a single flash
Blockchain Copyright Protection – A Viable Solution To Prove Ownership of Creative Works? »