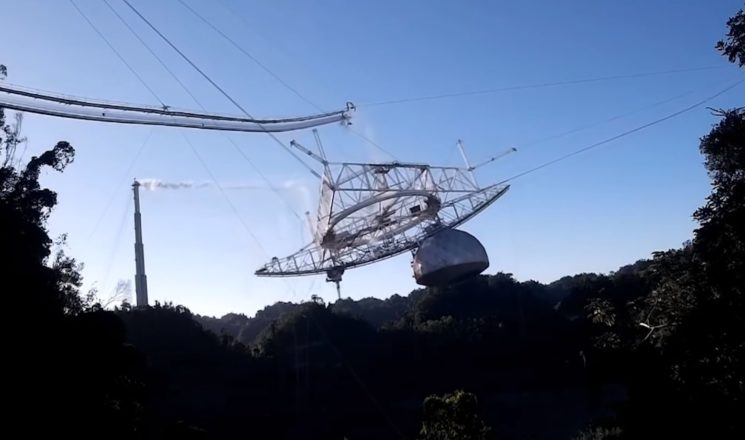 The Arecibo Observatory’s telescope in Puerto Rico, the second-largest radio telescope in the world, collapsed on 1 December. The massive platform crashed into its disk below and was completely destroyed. The terrible incident was captured on both the control room camera and drone. Space.com shared the footage with the world, so you can see exactly what happened.

The giant telescope was 1,000 feet (305m) in diameter, placed on a 900-ton platform suspended 450 feet (137m) in the air. According to Space.com, the structure collapsed last Tuesday after two cable failures, one in August and another one in November. The second failure made the telescope too delicate to safely repair. And only two weeks after the second cable failure, the whole structure collapsed. “It took 17 seconds for Arecibo Observatory’s massive radio telescope to crumble,” Space.com writes. “It will take much longer for the dust to settle.”

In a press conference held two days after the incident, Ralph Gaume, director of NSF’s Division of Astronomical Sciences, said that they’re currently “in the assessment phase.” The University of Central Florida operates the site for the NSF, Gaume explained, adding that they had hired a clean-up contractor. “They’re beginning to make preliminary plans moving forward to provide us with a plan for what the cleanup looks like,” Gaume said, adding that it was too early to know what it would look like.

Watch how this photographer defies gravity in this inverted room set