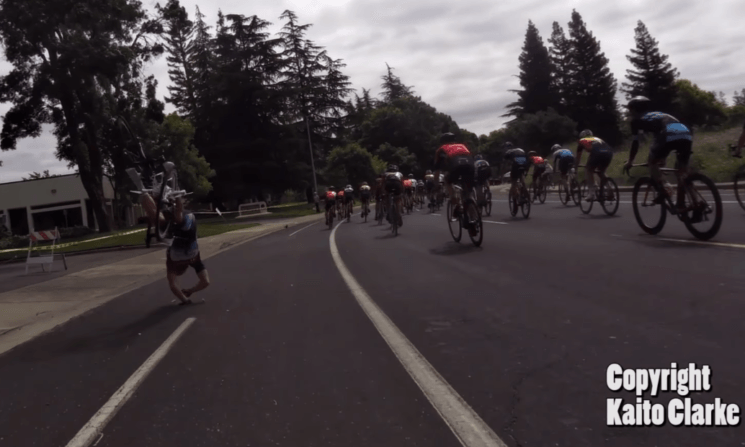 Irresponsible and incautious use of drones can cause many harms and problems. From crashing it into a building, to smashing someone’s head (or your own) with it, drones are definitely far from useful and fun if you’re not careful.

This time, some genius flew a drone near the cycling race. The drone smashed into a bicycle, causing one of the cyclists to fly over the handlebars and severely hit the ground.

When you watch the video at normal speed, you can only see the cyclist fly over his bike and hit the ground. However, when you see it slow motion (from 0:43), you can see more clearly what happened.

It seems that the drone hit the tree first, so the pilot most likely lost control over it and it crashed into the bicycle. What I found the most impressive is that the cyclist actually went on riding for a while before he flipped over. But a part of the drone remained stuck in the spokes of the front wheel, so the wheel suddenly stopped turning and the poor man hit the ground. According to the Redditor who posted the video, the only things cyclist broke were his helmet and bike, and not some of his bones. But still, the fall looks painful only to watch, and it could have ended much worse.

Frankly, I don’t know what has to happen in someone’s head to fly a drone near the cycling race. It’s probably not against FAA regulations, but these regulations are not the only thing to rely on when you decide to use the drone. Common sense and good reasoning are also useful to apply before you make the drone take off, and this video is a clear example what happens when the pilot doesn’t use them.

How To Mix Beauty And High Speed Photography

« Action cam in-depth review: Yi 4K+ vs GoPro Hero 5 Black vs Sony FDR X3000
This video was made with only one image and predictive algorithm »