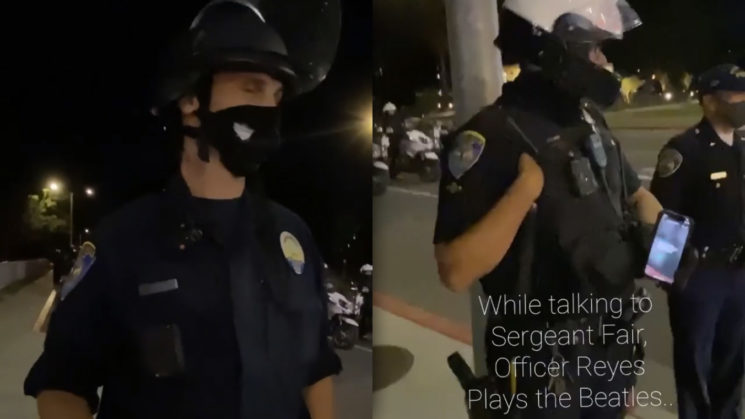 Filming police officers in the course of their duties has started to become quite commonplace. Sometimes it’s morons trying to wind them up and bait them into doing something stupid, but often it’s simply people trying to record the other side of the story. After all most police around the world wear bodycams these days. So, why not?

Well, according to Vice, police in Beverly Hills have resorted to playing copyrighted music while they’re being filmed in order to trip social media copyright filters to get videos automatically taken down as soon as they’re uploaded. Licensing issues with the music also prevent these videos from getting any news media attention they might deserve, too.

A post shared by ALWAYS FILM THE POLICE #AFTP (@mrcheckpoint_)

In the IGTV video above, as the person filming approaches the police to ask questions, another officer starts playing the Beatles song Yesterday on his phone, which is then picked up by the recording microphone and included in the video. It’s an obvious attempt to get the stream shut down by Instagram and other services while it’s still in the process of happening.

According to the text of the Instagram post, the video was later forwarded to multiple news agencies who covered the story being filmed but said they couldn’t use the video due to the inclusion of copyrighted music. Vice has reported that this isn’t the first time Beverly Hills PD has done this, either, and this is at least the third such video to come to light.

If you’re filming your interactions with the police, covering one of the various protests around the world, or anything else out in public, copyrighted music playing in the background – something over which you may have no control – is something to be aware of if you don’t want to fall foul of licensing issues, whether that be with social media or the actual media.

It seems now that those who don’t want to be filmed understand this now, too, are starting to take advantage of it.

Anybody else a little disappointed they weren’t playing Harold Faltermeyer? Yes. I said Harold. Not the stupid frog.

« Can you get the perfect score on this photography quiz?
First Sony FX3 specs leak with more photos – it’s basically an A7S III in a slightly different body »