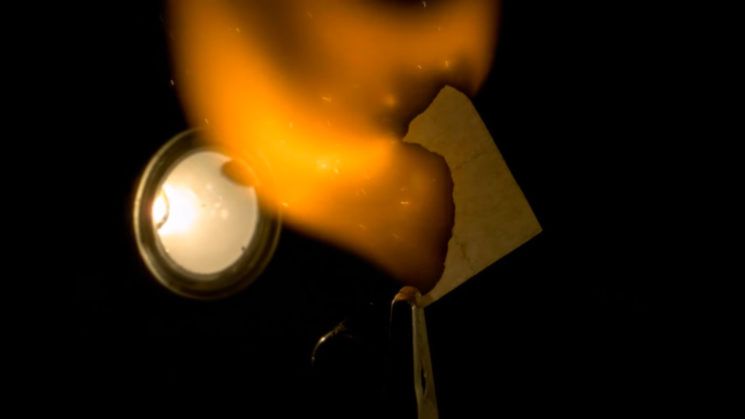 We’ve posted about the Chronos high speed camera a couple of times before. We mentioned how it smashed through its kickstarter goal in less than 24 hours. There’s still three weeks left of the campaign, but several units have been sent out for testing and review. One of those is Ben Krasnow, of YouTube’s Applied Science channel.

In a video uploaded to the channel a few days ago, the Chronos is mounted to a DIY motion control rig that pivots around a central point. This creates for an amazing slow motion bullet time style effect.

The term “bullet time” was first coined in the script of 1999 movie, The Matrix. The technique typically involves many stills cameras all shooting together. They all fire either simultaneously, or very slightly off-set in time, to produce static or slow moving subjects while the camera pans around them.

Using a slow motion doesn’t give quite the same effect as using an array of stills cameras, but it is still extremely cool, nonetheless.

You’ll notice that fire seems to play quite heavily in the examples shown.

This isn’t the first time slow motion cameras have been used to simulate bullet time style sequences, though. A 2002 episode of Stargate SG-1 called The Warrior used a similar technique for several parts of a fight sequence. In the show, though, the right was the reverse of how it is here, with the arm below the actors and the camera pointing upwards. The actors stood on a platform above the rotating arm.

Bullet time has definitely become a bit of a cliché since it was initially showcased in the Matrix. Using a slow motion camera isn’t a very common method of achieving such an effect, though. Slow motion cameras are still just too darn expensive, generally speaking. The Chronos finally puts these sorts of options into the hands of mere mortals. It also provides a much more manageable size than many slow motion cameras, too.

Is this a technique you’ve used yourself with slow motion cameras? Have you see it used in other TV shows or movies instead of the Matrix style array of stills cameras? What other creative options could such a slow motion camera offer up to you? Let us know in the comments.