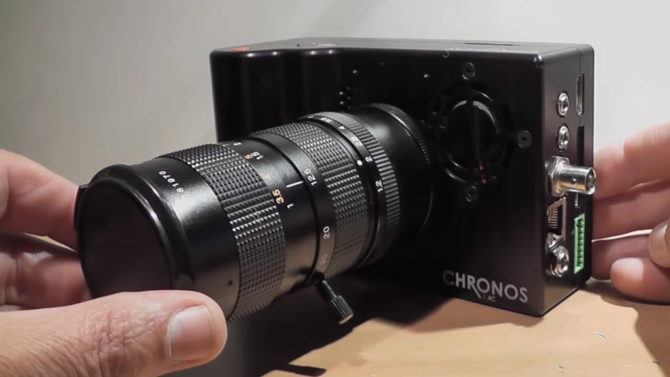 Now, there’s a new high speed player in the field, the Chronos. Developed from scratch by lone engineer David Kronstein, the Chronos costs less to own than the alternatives cost to hire for a day. It’s still not quite perfect. The software needs some work and it has a maximum resolution of 1280×1024, but it represents some much needed low cost competition in the high speed market. This video from Taofledermaus is the first unit to be sent out for testing and review.

Thanks to its 1.4Gigapixel per second throughput, at its maximum resolution or 1280×1024, it can shoot 1,057fps. That’s more than twice the framerate as the $30,000 Fastec TS-3. As you start to lower the resolution, the framerate increases.

At 720p, you get up to 1,502fps, which is a pretty serious number for such a resolution. Played back at 24fps, that turns each second of real-time into a little over one minute of footage.

You do have to drop pretty low resolution (640×96 pixels) to get that 21,649fps. That turns 1 second into around 15 minutes of footage. For most folks, though, that kind of slow down is going to be more for scientific observation than aesthetic quality.

It has a massive touchscreen LCD on the back for controlling the camera and interacting with various settings. It contains 8, 16 or 32GB of RAM (I’m not sure whether the base memory is still to be decided or these will be different options available). Storage is saved to SD card, USB drive or SATA hard drive, and it can save RAW video.

It uses the Nikon EN-EL4 battery which first appeared in the Nikon D2h and F6 bodies. So, while it does use a Nikon proprietary battery, these are widely available and there are many cheaper clones. The camera gets about 1.75hrs on a full charge, so whether you need a spare is up to you. It will also operate from AC power via an adapter.

On the side there’s RJ45 ethernet, audio I/O, HDMI output, USB host socket (for hard drives, etc), and an array of other sockets for connecting various things. It takes C Mount lenses, and various adapters are available for other mounts including Nikon and Canon.

At the moment, Chronos 1.4 isn’t finalised. It’s a production-ready prototype. There’s still some tweaking that needs to be done with the software, but the hardware appears to be pretty solid. Several review units have been sent out to various YouTubers, including the one linked above. For a more detailed explanation of the hardware, and a complete teardown, check out David’s video below.

The Chronos has been several years in the making. For all this to have been done by a single engineer without a huge team really is incredible. David is planning to bring the unit to Kickstarter in the next few months once the software’s a little more refined.

I for one can’t wait. Even if I don’t end up investing in one myself, it may shake things up in the high speed market. If it helps to start driving the costs down the costs of high speed a little that can only be a good thing. You can see more videos about the Chronos and its development over on David’s YouTube channel.

What do you think? Will you be picking up a Chronos once it’s available? Will you wait for the second generation? Or will you just be watching to wait and see how the big companies like Vision Research respond? Let us know in the comments.