To experiment with polarized light, you will need two polarizers, these can be easily purchased on the internet. There are also other sources for polarizers, like the glasses from a 3D movie or even an old pair of polarizing sunglasses. I use these Rosco Polarizing Filters. For best results, try to obtain two relatively large sheets 3 to 4 inches across. 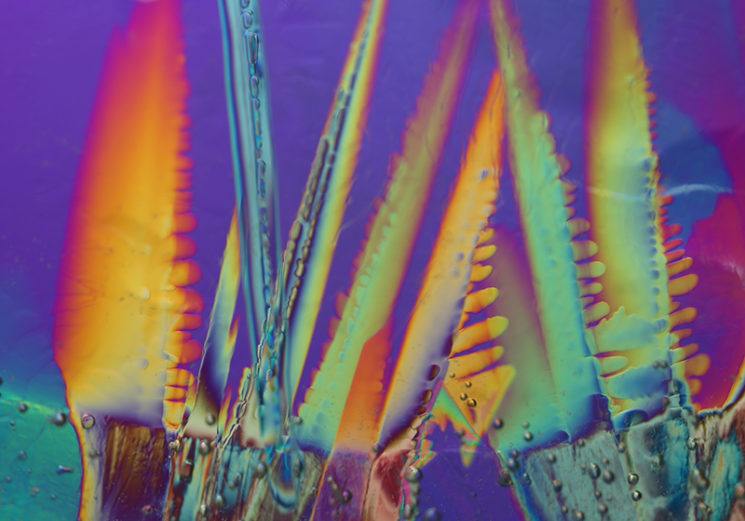 Amazing colors can be created in frozen ice crystals, which are seen here beginning to form as the water freezes. Under polarized light the ice appears to have many colors within it. The colors are due to the ice crystals being birefringent in polarized light. The water was placed in a clear glass petri dish between two polarizing filters and photographed at about 1x magnification.

Many materials show internal stress when illuminated with polarized light and photographed with a second analyzing polarizer. This unique property of materials is called birefringence and is caused by the polarized light interacting differently with the stressed material, compared to the unstressed parts. Some of the more common material that exhibits this property are glass, ice, plastic, and many types of minerals. The full list of materials would include thousands of entries.

To observe the effects of polarized light on a material, the material is placed between two sheets of polarizing material. The first filter is called the polarizer while the second filter is called the analyzer. If the second filter is placed at a 90-degree angle to the first, the light passing through is almost completely eliminated. The second sheet of polarizing material does not have to be in contact with the sample; it can be placed in front of the observer’s eye or in front of a camera. Without the analyzer, you would not be able to observe the birefringence in a sample. I like to think of these systems as a polarizing sandwich where the meat is the object showing the stress, while the bread represents the polarizers. 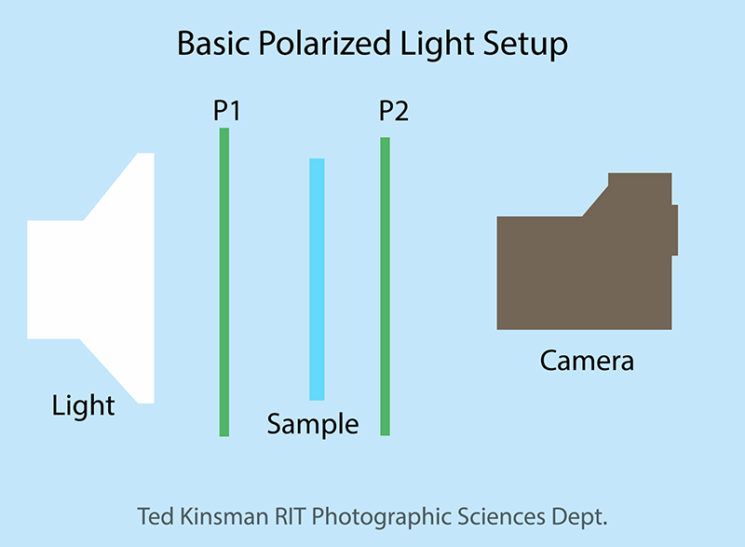 Equipment setup. P1 is the first polarizing sheet (polarizer), P2 is the second polarizer (analyzer) and on the far right is the camera. The sample is placed between the two polarizing sheets. 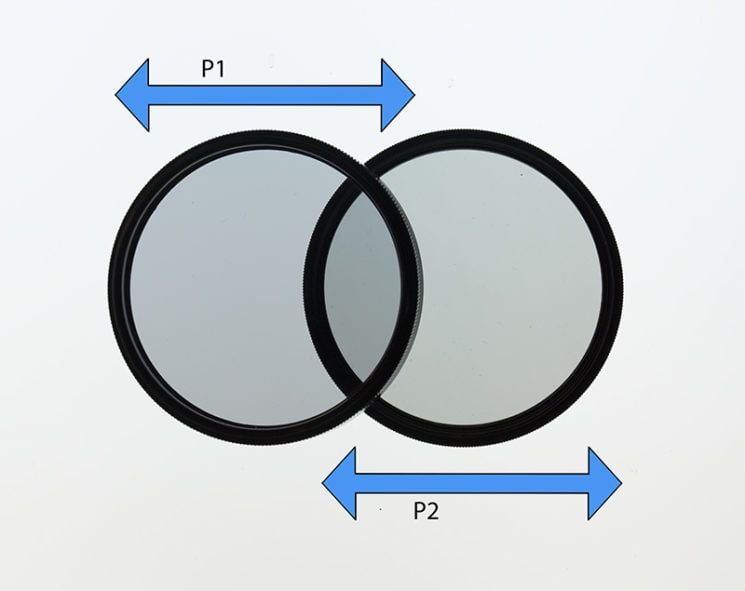 Two polarizers are aligned in the same direction. This orientation allows light to travel. Note: the center section is just a little darker. 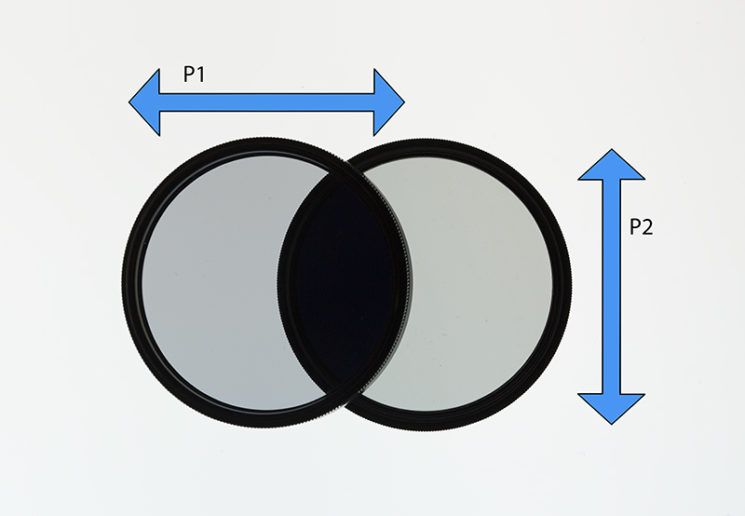 Here the second polarizing filter on the right is rotated 90 degrees to the one on the left. This orientation blocks most of the light. 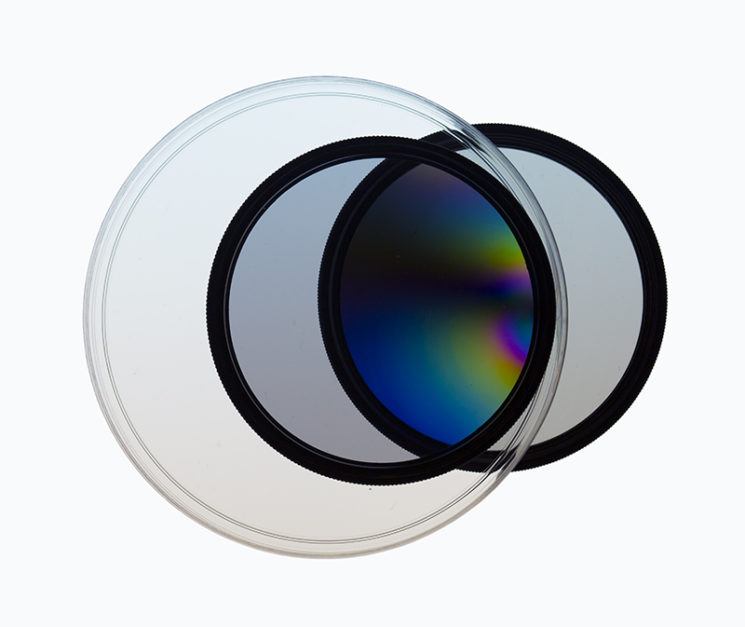 Here the polarizing filters are in the same orientation as above, but an injected plastic petri dish is placed between the two filters. The stress caused from the manufacturing process allows different colors to pass through. This process is called birefringence and most plastics will exhibit this effect. 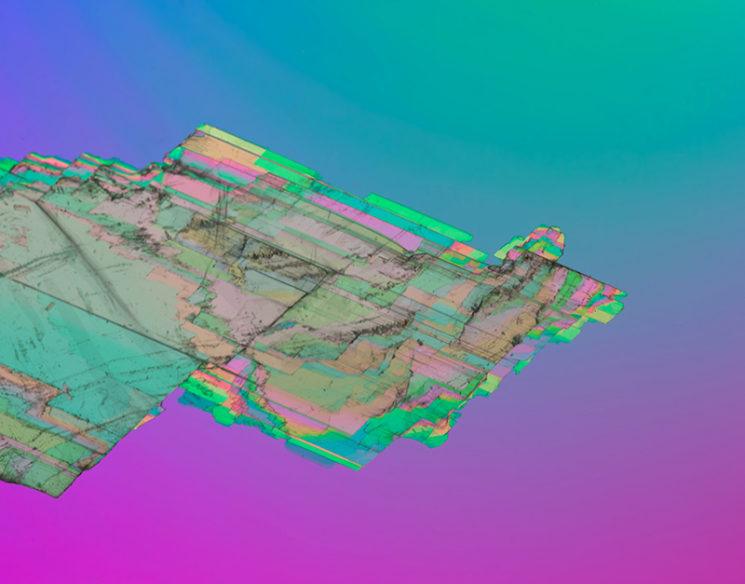 Gypsum. Polarized light micrograph of a thin section of gypsum. Gypsum is a chemical sedimentary rock, composed mainly of hydrated calcium sulphate. It may grow as a crystal aggregate (as here) or in giant tabular crystals up to 1 meter in length. Gypsum is used in plaster of Paris, in Portland cement, and as a flux in pottery. The most compact form of gypsum is known as alabaster. Sample collected in Penfield, New York. Object size: 40 mm.

Gypsum crystals demonstrate birefringence, here the different thicknesses of the crystal show up as different colors. The rock sample is placed between two polarizing filters and is about 2 inches wide in this image. 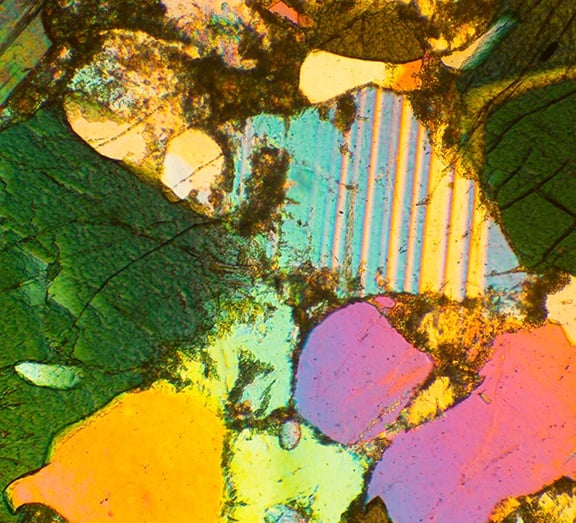 Hornblende crystals, polarized light micrograph. This mineral contains calcium, sodium, magnesium, iron, and aluminum in a silicate matrix. It is a member of the amphibole group of minerals, and it is found in igneous and metamorphic rocks. The area here is less than half a centimeter wide.

For many years, minerals have been identified by the way thin sections of rock interact with light in a special polarizing microscope. Above is a sample of hornblende photographed at 80x magnification. 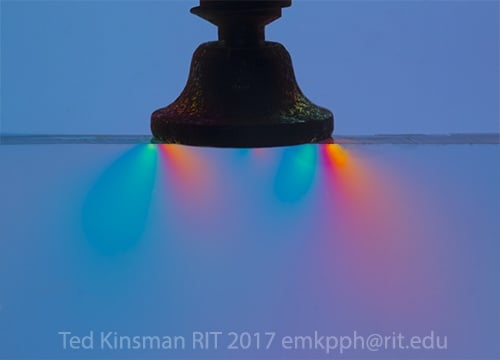 A close-up view of the stress created by a C-clamp with pressure applied to a block of glass. 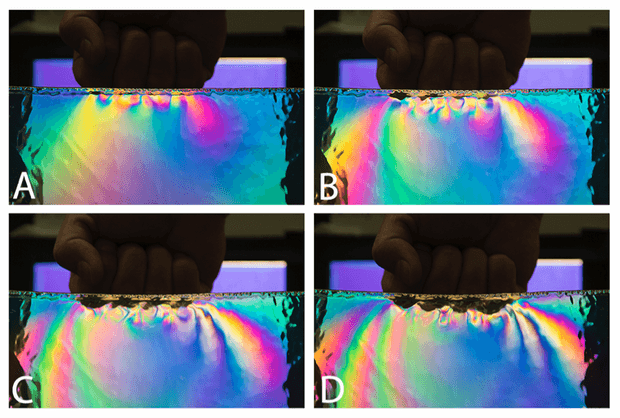 A sequence of four punches shown at different timings. The pressure from the punch creates stress in a clear plastic gel which in turn exhibits the birefringence. You can see the polarizing filter in the background, while the second filter is in front of the lens on the camera. 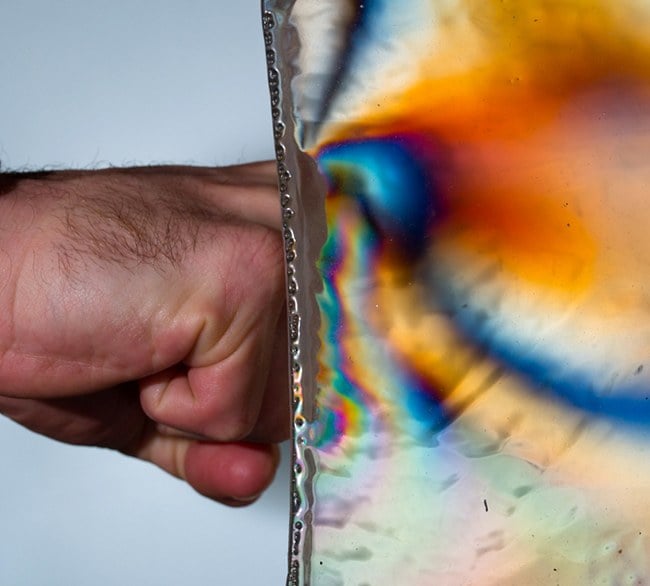 Ted Kinsman is an assistant professor of photographic technology at the Rochester Institute of Technology. He teaches advanced photographic technology, light microscopy, and macro photography courses. Kinsman specializes in applying physics to photography. You can find more about him and his work in his faculty profile and on his website. This article was also published here and shared with permission.