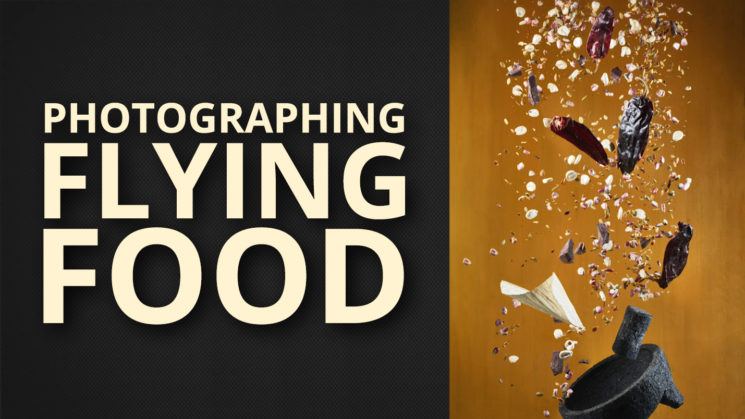 This probably isn’t something you’ll want to try at your local coffee shop to get a quick photo for Instagram. But, if you’re a budding food photographer, or want to try something a little different, this is certainly an eye catching technique.

Seattle based commercial food photographer Steve Hansen has more than a few food lighting tricks up his sleeve. In this video we see how Steve side lights flying food with a pair of Westcott 12″ x 50″ Stripbanks. But he’s not using them quite the way you might expect.

As Steve explains in the video, the strip softboxes have both had their front diffusion panel removed. This leaves only the inner diffusion, with some light escaping and bouncing off the reflective silver interior. This creates an edgy light, which stays quite soft but gives a lot of contrast and pop to the edges of the subjects falling past the camera.

On the left light, Steve has added an egg crate grid to the softbox. But, again, he’s not using it quite the way we might normally use one. He’s only covering half of the softbox’s front surface area with it. This means that the grid is tighter than it would otherwise be, and helps to prevent a little more spill light hitting the background. 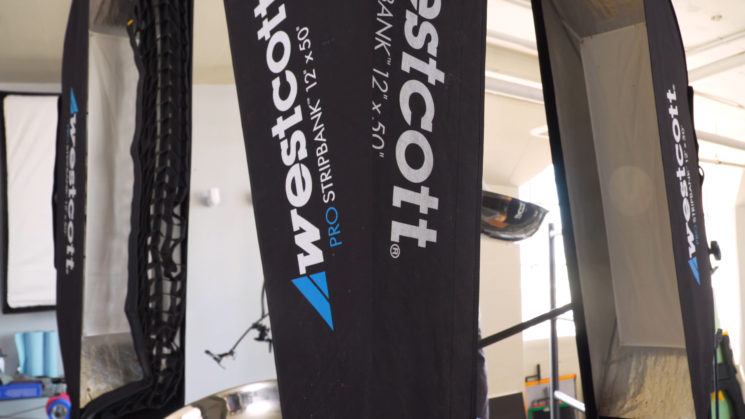 Steve goes on to say that he lit this way to provide a bright edge light on both sides to highlight the texture in the peppers. Different types of subject would require different lighting setups. Milk, for example, would have a backlight to help show some of the translucency of the liquid.

Like most forms of motion photography, you’ll want strobes with a very fast flash duration. Slow flashes just cause too much motion blur, and the goal here is to freeze the objects in mid air.

For liquids and food crashes, or anything with high speed momentum, Steve has settings that he likes to stick to. His shutter speed is at 1/250th, the limit of his flash sync. And he keeps his aperture around f/16 to get the best balance between sharpness and maximum depth of field. He could stop down smaller than f/16, but then risks diffraction, and introducing softness back into the shot.

With everything in place, Steve has an assistant drop the objects from above, as he fires the shutter. Working this way means you’ll also want flashes with fast recycle times, too. Otherwise you’ll end up with one shot per drop. If your strobes have a near instant recycle time, you might end up with 3 or 4 to pick from for each drop.

One thing to note about shots like this is the randomness of items. It can be almost impossible to achieve everything you need in a single photograph. This is where techniques like compositing come in. Steve created several shots that would eventually be composited into the final image.

These types of shot fall under a category that Steve calls “Splashes & crashes”. He has a whole section of his website dedicated to these, and they’re well worth checking out if you want some bright and colourful food inspiration.