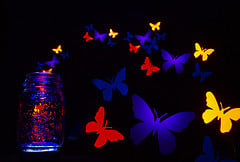 As you may already be aware, light painting is the process of moving light sources around during a single exposure to create an overall shot. A more specific way to include light forms into a photo is with `light stencils’.

In this article, TigTab explains how to create a light stencil using a shoe box.

Find an image that you would like to make into a light stencil. You can also use your existing photos, and convert them into stencils. Think about what you would like your overall picture to look like – is the stencil the main focus of your shot, or would your stencil be enhanced by placing it into a certain setting/scene? 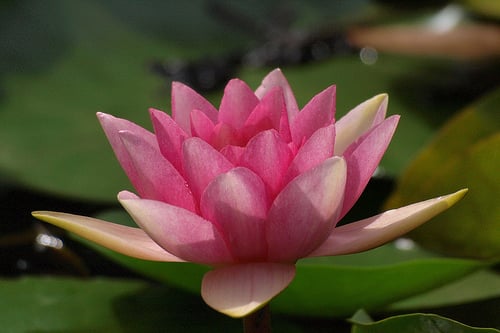 Transfer the image that you have chosen onto tracing paper.

Cut out the image on the tracing paper (an art knife gives you more accuracy when you cut, and if you use a cutting mat your table will thank you), this gives you a template that can be reused, and will allow you to fine tune the stencil image (as you can hold it up to the light, which will give you a idea of how the light will appear in your final shot). 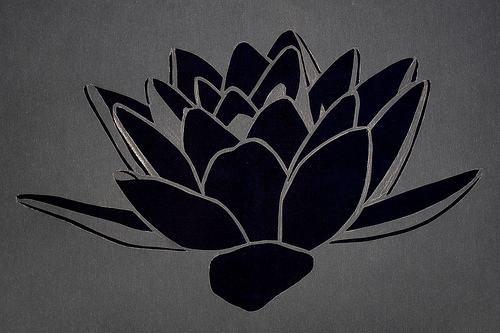 Now transfer the tracing paper image onto the shoe box lid. Allow a border area from the image to the outside of the box lid (this doesn’t need to be big – say, no less than 3cm). Cut out your image out with the art knife. The trick here is to ensure that all edges and lines are smooth, as this will give you a crisp final image.

Now to add some colour to your stencil (this goes on the inside of the box lid). I find layers of cellophane work well, but you can add all sorts of colour and texture if you want to create different effects – have a play to see what works for you.

Behind the colour inside the box, you now need to add a piece of opaque paper, so that the light has something to bounce off to create your image. Tracing paper cut to size works a treat.

That is your stencil made, now to prepare the box.

Paint the outside of the box black, and line the inside with a reflective surface to evenly bounce the light (aluminium foil that you use for cooking works well for this).

Cut a hole for your light source to be inserted (from the outside into the closed box). I use a flash unit, as the quick flash produced captures a crisp image. Don’t make this opening too big, the aim is not to let light through here as it may appear in your shot.

Now place your lid with the stencil image onto the box.

A flash unit can now be inserted into the box, and you are ready to give it a go! 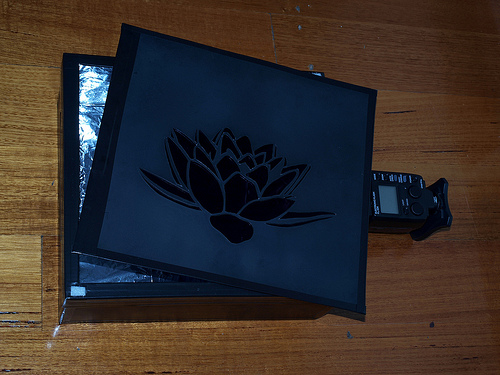 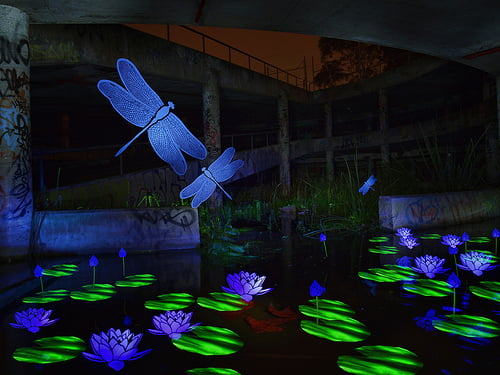 Below you can find some useful hints on creating the stencil 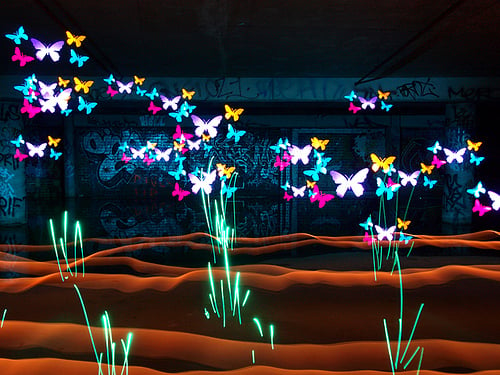 This picture was my very first light stencil shot. It was taken in an abandoned car park, which was partially flooded, and had an interesting mix of coloured graffiti around its walls.

The butterfly stencil used consists of 5 butterflies, it was shot multiple times across the shot to give the appearance of many butterflies, then an orange cold cathode light was run along the ground, then the grass was drawn using a small green led light (which could be switched on and off as each line was drawn), to finish a torch with a blue gel was used on the wall behind (to light up the graffiti and bring out the reflection).

Depending on the light sources being used, the aperture would be adjusted accordingly. A rule of thumb with any light art photography would be – the brighter the light source then a lower aperture would be used (eg f10-F18). For a straight stencil shot, an aperture around f7.0 – f9.0 works well. ISO is always set to ISO100, which assists with reducing noise during longer exposure. BULB mode is always used, which allows you as much time as you require to create the shot. The camera is always mounted on a tripod, and remote is used to trigger the camera (so that there is absolutely no movement).

If you are using multiple light sources in your overall picture, you will need to adjust your aperture to accommodate all lights being used, i.e. so if you were to use a stencil as well, the layers of colour on your stencil will need to be configured (adding more or less layers of cellophane) to accommodate for this. You can see in the image used that there needed to be more layers added as the middle butterfly is overexposed.

It’s also important to do a test shot prior to using your stencil, this will allow you to correct any problem areas. 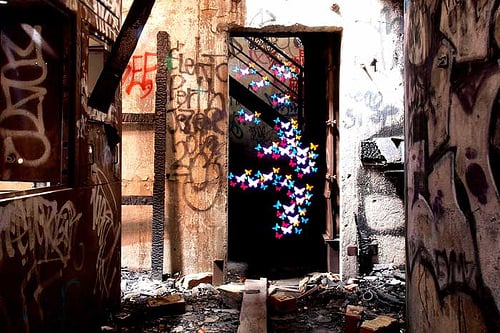 I prefer to use abandoned locations as a backdrop for my stencil shots. I like placing light pictures in places that, upon first appearance, appear to be in juxtaposition to their environment.

For me, creating scenes with stencils is about showing the beauty in both the light work and its decaying location – capturing both in that small moment of time. 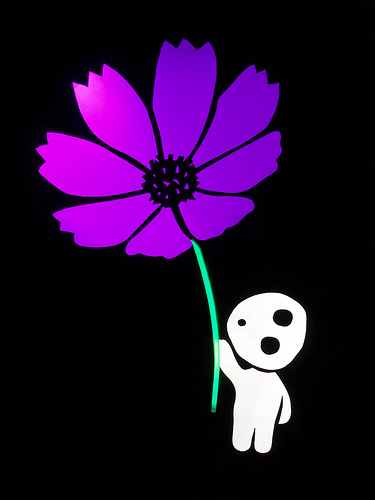 There is so much fun to be had with light stencils – their use only limited by your imagination. Get out there and have some fun creating :o)

Quick Tip: How To Make Colorful Light Paintings With Lee Filters And A Bubble Blower