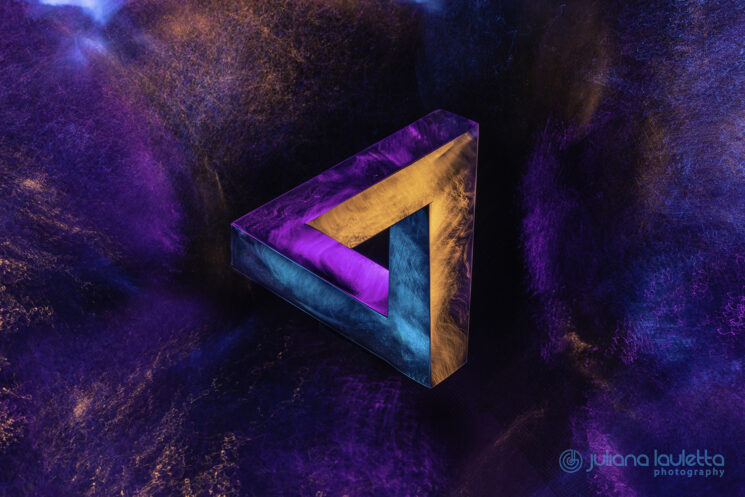 The world of light painting is infinite it seems. It can involve anything from sweeping epic landscapes with light painted buildings, right down to macro shots done indoors. One artist has developed a fascinating technique of using stencils to create her beautiful images.

Brazilian photographer and multimedia artist Juliana Lauletta has been using this stencil technique for years, honing it into a fine craft. She spoke to DIYP about where she gets her inspiration, and generously shares her tips for making your own light-painted artwork. 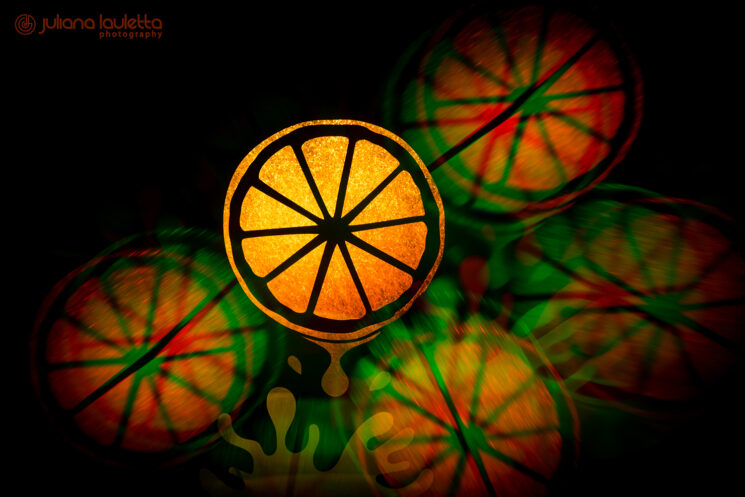 “When people ask me about where I get my inspiration from, I always say that I wish I had something truly magic and inspiring to say but in reality, my answer is quite cliché and boring: my inspiration comes from everywhere,” Juliana says, somewhat humbly. “Art is expression and therefore very personal,” she continues. “Whatever is happening in our lives becomes the driving force behind our work. So the themes for the photographs will vary according to the events in my life.”

Juliana says that for many years she wondered how she could create different photographs using light painting. “I really enjoyed spinning wool and making orbs but I was missing more conceptual elements in my work. I wanted to tell more stories rather than just capture light trails,” she explains.

Her first ‘successful’ light painted image would be “Rolling on the River” which she made by turning the London Eye into a hamster wheel. A witty take on the rat race of London life. 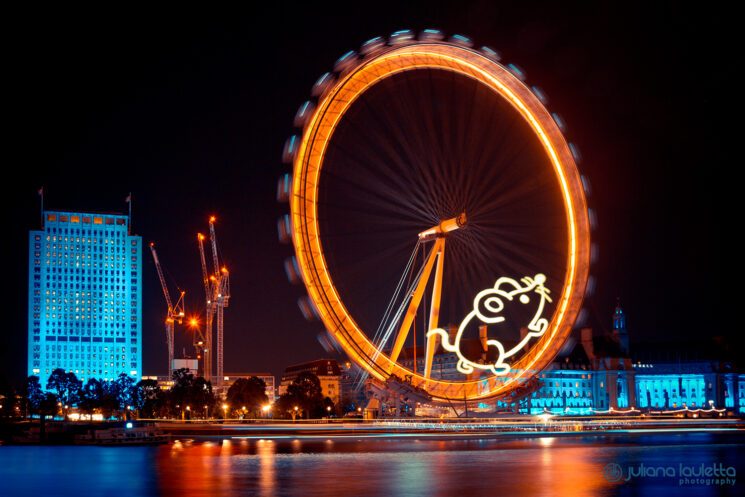 After that Juliana was hooked. However, circumstances intervened which meant that Juliana had to completely change her way of working. Unfortunately, years of carrying heavy camera equipment and hours spent editing images and video had left Juliana with severe physical limitations. She was literally forced to make her world smaller, and turn her bedroom into a light painting studio.

Gone were the epic locations, but now Juliana challenged herself to continue to explore and create under these new constraints. She bought a blackout curtain, hung a black sheet as a backdrop and started to experiment. “I was in a difficult financial situation so my budget was a maximum of £3 pounds a week for supplies that I was mostly getting from the Pound Shops or just recycling things,” she says. “I created a bunch of light tools made of cheap fairy lights, LED torches (with balloon tips for creating colours) and LED toys all wrapped up with black PVC tape.” She used black cardstock to make cutouts that were made into stencils and then sealed with transparent adhesive tape.

Expressing myself through my images has become an essential part of my life and has made a major impact in my mental health. 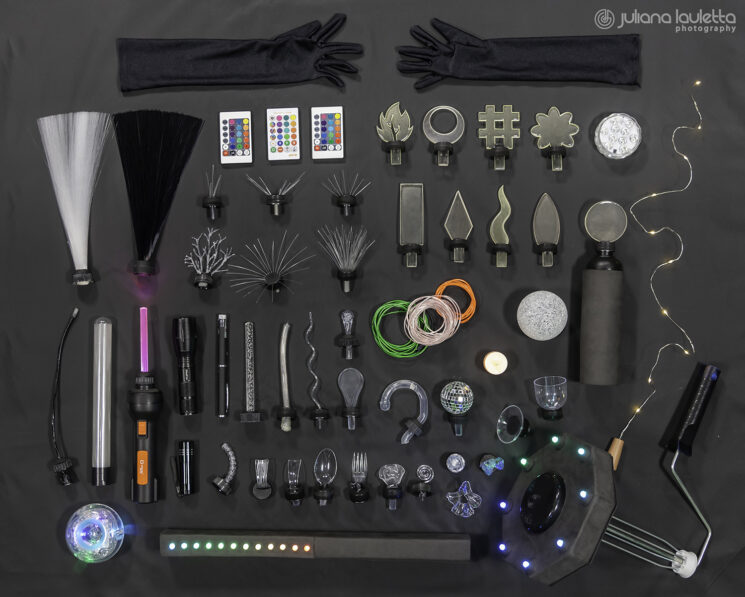 Juliana uses a Nikon D750 and several different lenses, however, she stresses that the type of camera isn’t important, you can use almost anything to create images like these. “Explore and create with whatever you have in the moment,” she says, “for light painting you can use any camera that makes long exposures.”

She uses a variety of LED lights and torches, including children’s toys, mobile screens or anything that has lights in it. In the beginning, she was using mostly fairy lights but due to environmental concerns, she switched t a rechargeable option and now uses RGB LED lights with remote controls for the colours.

“I arrange the LEDs together by soldering the number of lights that I want for each tool. I also use modifiers on top of the lights, like fibre-optic cables, plexiglass, plastic items (bottles, spoons, cups, etc), and resin props that I make and I am always testing different materials to see how they interact with light.”

“The idea is to create the whole image in-camera in one single long exposure,” Juliana explains. “Not only to make the process interesting but also to preserve my arm and spine from having to work too much on the computer.”

“First I work on an idea that I want to present and I draw a quick draft,” says Juliana. “Then I build the props or gather the materials. Sometimes it is a stencil, other times is an object that I paint with metallic spray paint to make it reflective, sometimes it is a glass or transparent object.”

Juliana arranges her objects in a composition (using a black background), mounts the camera on a tripod and sets the exposure to “Bulb” with a remote trigger. She then turns out the lights and starts to illuminate the elements one by one to paint them with light.

For the stencils, she draws the image in black cardstock (or black adhesive vinyl), cuts it out and places it inside a large black box that has had the bottom part removed, similar to a shadow puppet theatre box. She then illuminates the stencil from behind using different light sources to create different textures. “If I want more than one texture I mask each part of the design and paint them individually,” Juliana says. The box contains the lights, preventing them from leaking and ruining the rest of the image. 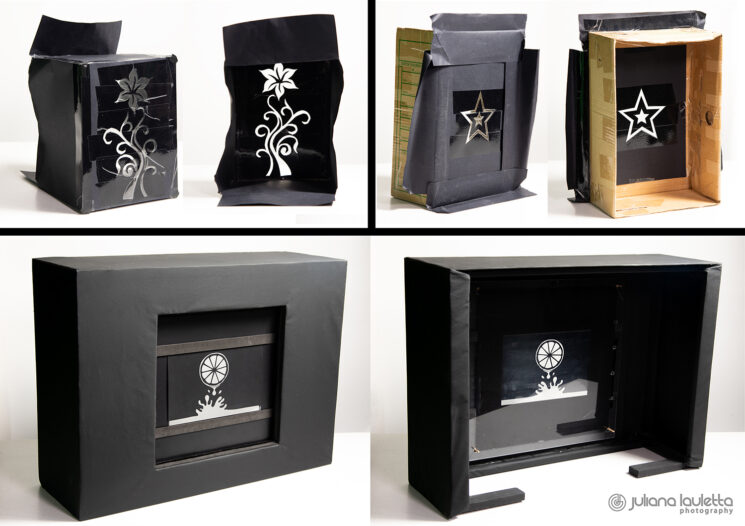 Juliana says that it is important to keep everything black to avoid any light reflecting and showing in your exposure. So all the tools are painted black and she also wears black gloves while shooting. Additionally, she often uses more than one technique combined. Like in-camera double exposures, shaped bokeh, kaleidoscopes, or spirographs.

The whole process is quite experimental. There are so many things involved apart from photography: drawing, designing, paper cutting, crafting the props and the tools and hand movements.

The post-processing is the occasional clean up of specks and any other small elements that can be distracting. Juliana also enhances the contrast, saturation and colour hues of the images. The LED lights are quite limited regarding the shades of colours, so she tweaks the colours to make the images as beautiful as possible.

Juliana says that the most difficult aspect is working in the dark. “Not only because it is hard to see but because I am a bit clumsy,” she admits. “I kick my tripod and I drop my objects in the middle of the exposure all the time. So I am constantly crawling in the dark and fumbling around the floor to find my tools or remotes. I am sure it looks quite funny if people could see me doing it.” 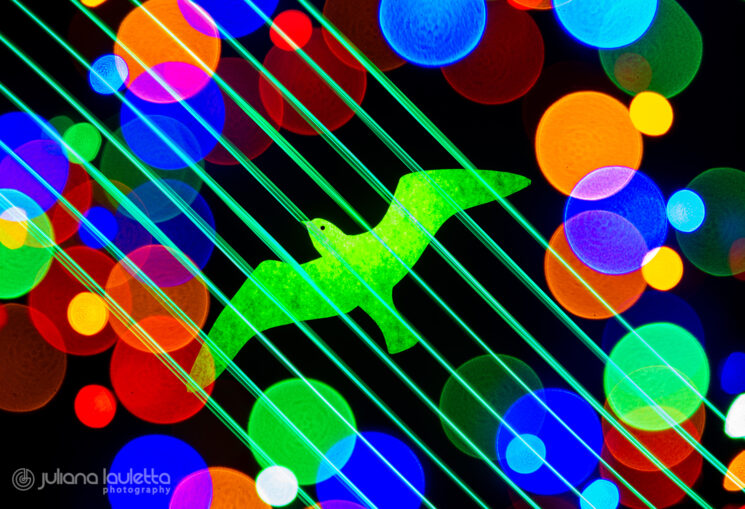 She also stresses that creating an image is time-consuming. It involves a lot of trial and error and usually takes many hours to complete, especially regarding the exposure. Each colour and light tool registers differently in camera. Also, depending on the shade and intensity of the light tool, she has to illuminate the object for different amounts of time.

Because of this, Juliana always makes tests first. After that, she makes sure she gets the times right when mixing the colours. She also takes the time to practice the best hand movements to capture the lights smoothly without many bumps. 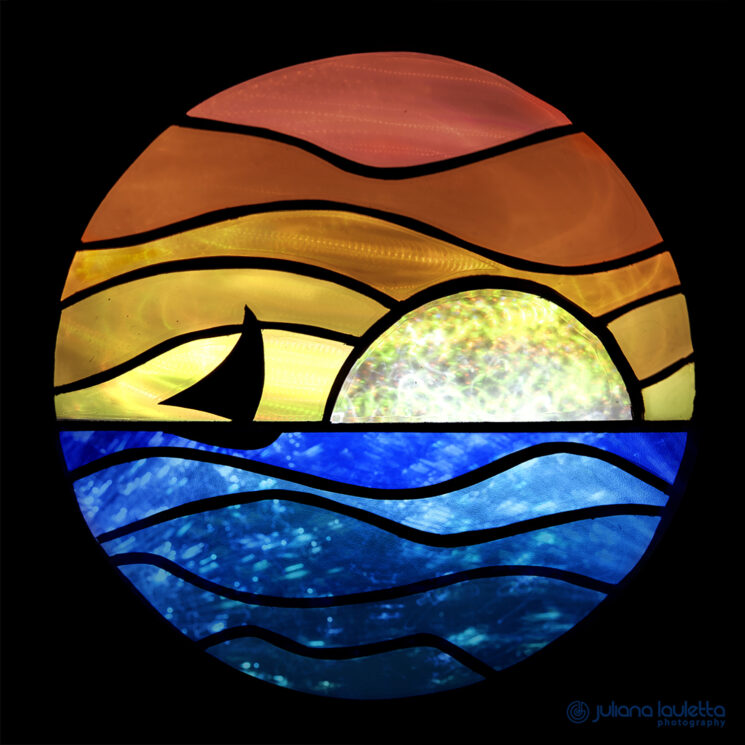 For any photographers wanting to give this a go, Juliana is careful to express how varied the results can be. Don’t be afraid to experiment, and don’t get too impatient, this technique takes time.

She would also like to impart to photographers the importance of looking after their physical health, particularly when shooting. “Do not push it to the limit as I did and please be careful when carrying your gear around,” she says, “stop resting the camera around your neck, the price is too high.” 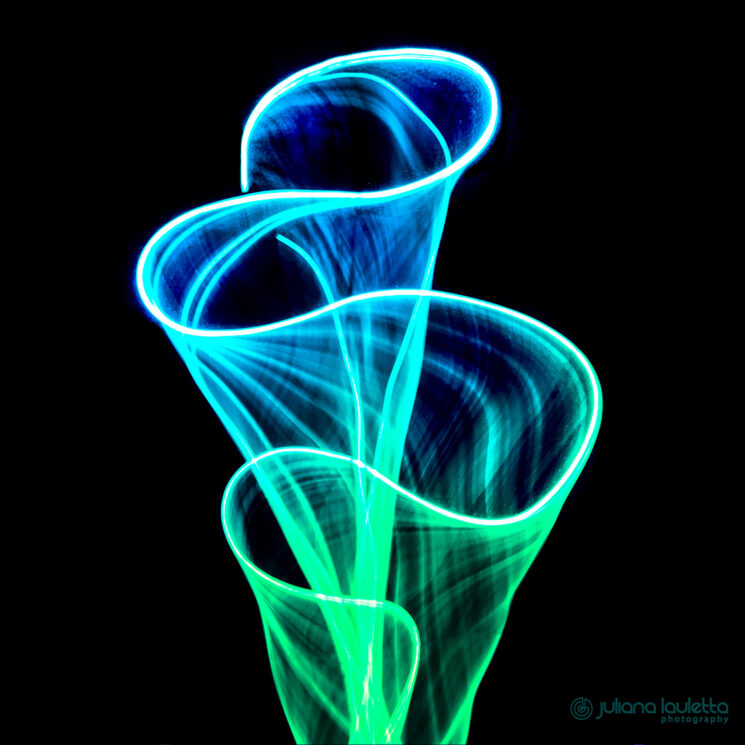 I’m sure you’ll agree that Juliana’s images are absolutely beautiful, and I find her techniques for creating them quite fascinating to watch. There really is almost magic involved as the final image appears out of nowhere.

Juliana says that she would love to drag more photographers “into the light” so to speak. If you’d like to see more of Juliana’s work or perhaps try it for yourself, you can follow her on Instagram or check out her website.