It can be gnarly out there, especially if you’re a pro-surf photographer. This week a boat full of professional photographers, cameramen and pro surfers got more than they bargained for when they got hit by a true monster of a wave in Teahupoo, Tahiti.

The video above shows the camera boat first being it by a wave which it rides with relative ease, but then a massive wave sneaks in from the opposite direction, seemingly out of nowhere, sending the boat into an almost verticle position. Almost all of the passengers fall into the churning surf.

There has been criticism online about the boat shouldn’t have been there in the first place, was too close to the surfers etc. However, pro surf photographer Tim McKenna was actually in the boat when it happened, and explains the run-up to the events. All is not clear from the video it seems.

”We were on the orange Poti Marara fishing boat captained by Eric Labaste,” writes Tim. “At Teahupoo, the present situation is this. Camera boats with professional photographers, cameramen and pro surfers who have been shooting the wave for years are getting gradually pushed towards the wave by an ever-increasing number of taxi boats, jet skis, tourists and locals wanting to get close to the action for a selfie or story.”

He continues, “in addition at high tide, some sets break closer to the channel compressing the zone even further. The first clip shows our boat getting caught a little too close to the first wave of a set with Joao Chumbo surfing on a wide set. Nothing dramatic, something Eric, myself and many other pros have experienced a hundred of times over the last 25-years. We know the risks of shooting around waves and are fully prepared.”

Tim goes on to describe how one of the photographers on the boat stood up without securing himself. “In a flash of a second, he slipped falling out of the boat, camera in hand,” says Tim. “Eric looked back to see how we could pick him up. The couple of seconds spent assessing the situation how to rescue him put the boat in a critical situation as the second wave of the set started to break even closer to the channel.”

Tim explains that because the boat driver could have accelerated full-throttle into the wave to save the situation, however, he knew that that would merely make matters worse, throwing everyone overboard. Instead, he stayed calm and readied himself to tackle the approaching 12-foot wave. But there was an additional problem, a jet ski was now in the way blocking his passage. 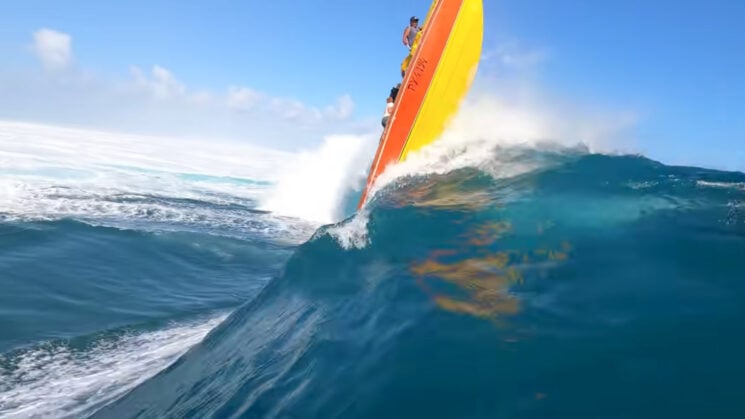 He continues, praising the driver’s handling of the situation saying “Eric, a fisherman by trade, is the most respected, experienced waterman at Teahupoo and the Fenua Aihere area. His positioning, understanding of the Teahupoo channel and the way the wave breaks are unparalleled. Most of the photos and footage that have been seen worldwide have been shot thanks to Eric’s expertise.

The waves at Teahupoo are renowned for being the most dangerous surf in the world and the location is part of the international circuit for professional surf competitions. The waves there have a unique combination of size, power and speed made more dangerous because they break over a sharp coral reef lying only meters below the surface. Add to that the presence of sharks and you have to be pretty brave to enter the water in that part of the world.

Tim concludes his statement by saying that “Eric has now reached legendary status for his skill in handling successfully this extremely difficult situation. It is easy to criticise without knowledge of the conditions and actual sequence of events. The Ocean can be treacherous. Experience and keeping calm will always prevail over rash or hysterical behaviour.”

Fortunately, no lives were lost, just potentially some camera gear, although it’s more than possible much of it was safe inside waterproof housing. Here’s hoping!