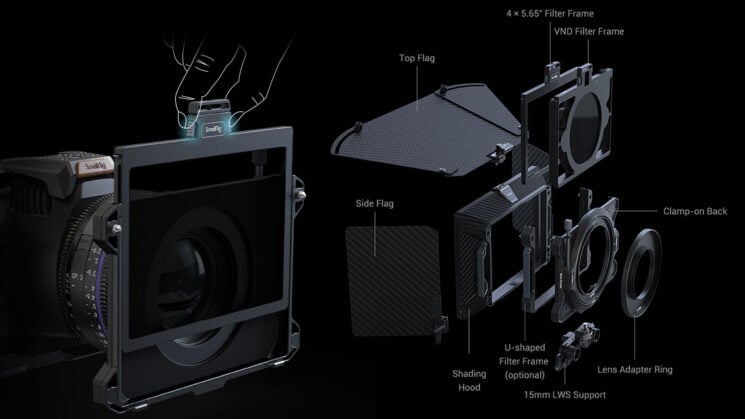 Thread adapters are available to mount it to 67mm, 72mm, 77mm or 82mm lenses as well as the option to mount it to standard 15mm rods. This matte box also offers the ability to drop in the new SmallRig Variable ND Filter Kit that lets you adjust the strength without having to touch the filter itself – you can even motorise it!

The “Star-Trail” basic kit comes with the clamp-on back to which everything else attaches along with four thread adapter rings at 67mm, 72mm, 77mm and 82mm, a shading hood (that sits in front of the filters), a filter frame that takes 4×5.65″ filters, a top flag and a carrying case. There’s a Star Trail VND kit which features everything that’s in the basic kit plus the VND Filter Kit and the 15mm support for mounting it to a standard 15mm rod rig – for use with lenses smaller than 95mm in diameter. 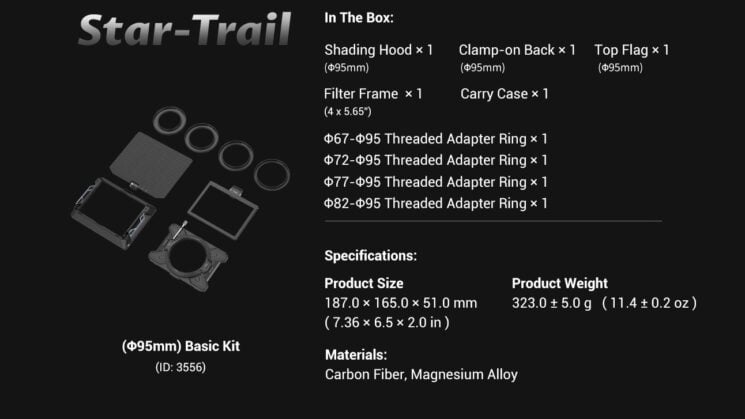 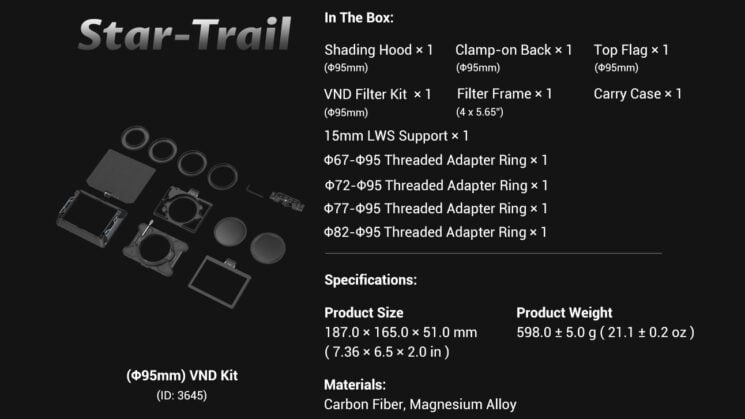 But wait, there’s more! Oh yes, SmallRig has also announced a larger version of it that’s called the Revo-Arcane Basic Kit package, which is just like the Star Trail Basic Kit, except it’s designed for larger 114mm diameter lenses instead of lenses with a maximum diameter of 95mm. This one comes with a larger back, later top flag, larger shading hood, the 15mm rod mount and a pair of side flags – no VND filter kit, you’ll have to buy that separately. 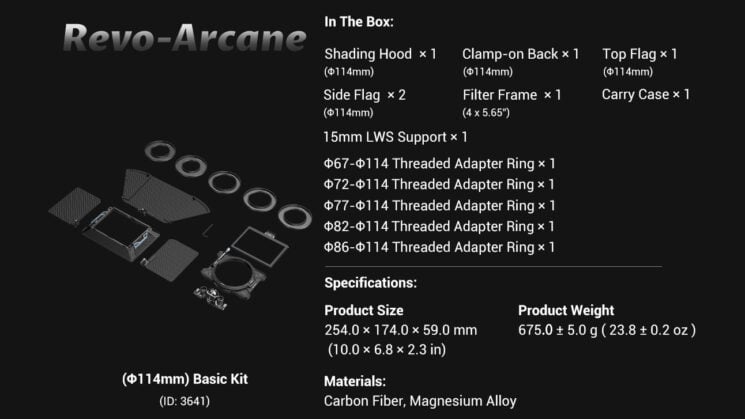 It looks like a pretty decent and versatile system. And, well, we should hope so, given that SmallRig has pumped out so many matte boxes over the last couple of years that they should know what they’re doing by now. But my only question is, why not do this sooner? I mean, they must’ve known for a while that they wanted to do a modular matte box. So, why not just start off with a system that was more future-proof and could grow and adapt to each user’s needs as new accessories were released rather than releasing five completely different matte box systems and making users feel like they just wasted money when a new one gets announced five minutes after they bought the last one?

Sure, each of the SmallRig matte boxes has its own uses and benefits and I own a couple of them myself (2660 and 3196) as well as the Tilta Mini Matte Box and I’m happy with them all (mostly). But when new ones keep coming out every few months that support a user’s needs better than the previous ones, it’s frustrating for a lot of customers. And even though the SmallRig matte boxes are relatively inexpensive in the grand scheme of things, it adds up real quick when people end up needing to buy several new ones to take advantage of the new features they didn’t know were coming at the time they bought their old ones. Especially if they use multiple cameras and want matching capabilities on them all.

Anyway, for those who haven’t already bought into a matte box system, it looks like a great option, with a variable ND that not only lets you easily adjust it without having to dig your fingers inside the hood (like you have to with the previous matte boxes with screw-on VNDs) but also features a 0.8 Mod sprocket to let you motorise it. If I didn’t already have three matte boxes, I’d probably be grabbing a couple of these myself.

How To Convert A Waste Basket, A Drawer Organizer And A Sprinkler Donut Into A Pro Matte Box

« I couldn’t find a weatherproof enclosure for a USB power bank on the Internet, so I made my own
Instagram’s new test turns all videos into reels »