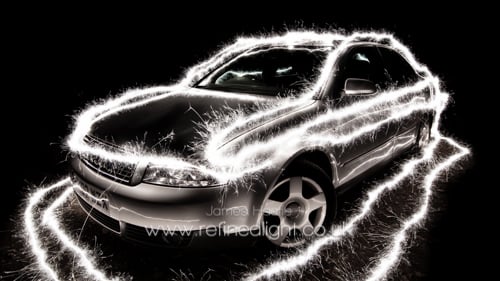 This is just what came into my mind when I saw James Hastie‘s sparkles lightpainting. James was king enough to share his method of making this image. James, the floor is yours:

In this tutorial I will be discussing how I light painted the following image, the steps I took in planning it as well as execution and post processing.

Since seeing some amazing light painting photos on line I’ve been practicing with long exposures. I’ve seen a few peoples takes on using sparklers to create interesting effects in images. Sparklers are great to use for light painting as they are quite bright and give a unique “electrical” effect when you paint with them.

To start with obviously you will need some sparklers, I bought 4 packs of 5 sparklers from my local fireworks shop, at around £1.50 a pack. I used 2 packs (10 sticks) over 2 nights, including some attempts to get lines and exposures correct. While we are at it, Get the bit sparkles, the ones that burn long – about two minutes.

A tripod is fairly essential as we will be exposing at very low speeds. (you could probably get by with resting the camera on something, although this will limit your composition choices).

Lastly, a camera that will allow you some control of exposure settings. Personally I used my Nikon D90 with Tokina 12-24mm f/4 lens, the reasons behind this were that it is my widest lens and has a distance scale for manual focusing, which in low light is much easier to use. If you don’t have a distance scale, you can use a torch to light up your subject and pre-focus then lock that focus by switching to manual.

My choice of photograph was going to involve my car and the sparklers. It is important to shoot away from as much ambient and manmade light as possible so the sparklers are the only source of light in the image, so I set up in a park next to my house. (An abandoned parking lot will work great too).

My tip for shooting light painting in general and sparklers is choosing your angles carefully. Using my car as an example, if I shot straight head or side on I would run the risk of the light trails across the car bunching up and just becoming a blob of light rather than individual trails, you can see this in the image below. 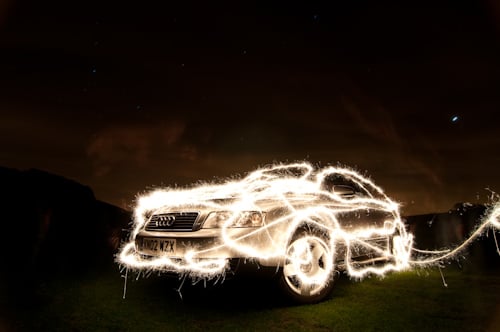 With this is mind I felt a head high 3/4 side on shot with the focus on the front left wing, wheel and bonnet would work the best, this would allow me to paint across the car and get as many parts individually covered.

For camera settings I used a remote shutter cable release to allow me to overcome the 30 seconds barrier and shoot for as long as the sparkle was burning. While you can probably stack a few 30 seconds images in photoshop, dealing with sparks will take lots and lots of work.

For the exposure settings I used ISO 200 to minimize noise. Sparklers are quite bright so you should be able to stop down to around f/8 whilst still getting a touch of overexposure in the center of the sparkler. You still get good sparkles at f/11, however the detail on the car was lost at f/11 as you can see in the image below. Lastly, for the Tokina that I was using f/8@12mm give a hyperfocal distance of 1 meter, so everything beyond that would be in focus. 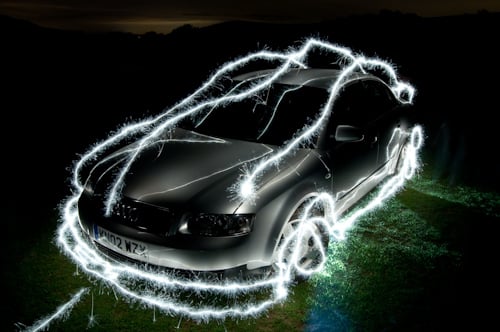 Before I used any of the sparklers I did some test runs with my LED key ring light to practice where I was going to draw with the sparklers, this also gives you approximate timings you will need for using the sparklers. 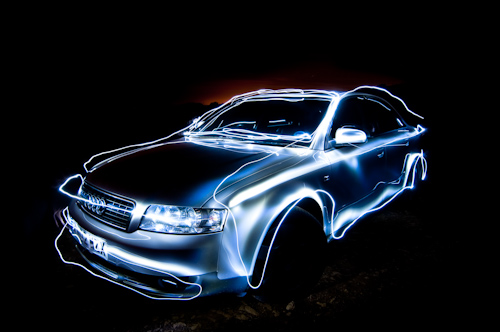 A few of my early attempts with the sparklers failed because I missed sections of the car out or went over the same section twice. Key to a successful shot is planning in your head where you are painting and try to see in your mind how the camera is going to interpret your painting, less is actually more with sparklers, trying to cover too much of the car results in a wall of light and nothing of any real interest. I’ve included an example where I felt the sparklers were too much. Of course, this is entirely an artistic choice. 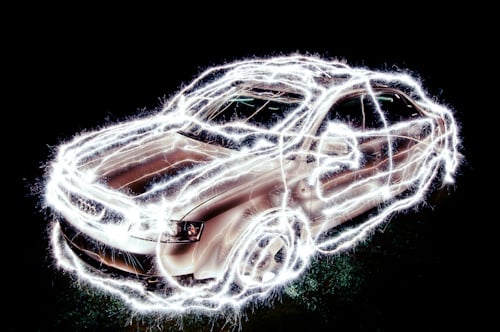 On my shots I really like how you have this big contrast between the sparklers and their reflections on the paintwork and the duller, darker parts where I didn’t cover it. I chose to outline the whole car to give more depth to the image, this meant painting all around the vehicle where I felt the camera would see the light, this meant from the far side of the car through the windows as well to give some rear lighting. Finally I picked out sections of interest like the wing mirrors or badges and tried to highlight them. This gave me my raw shot below, you can see in this image that although I was wearing black I’ve created a ghosting effect of myself, also the white balance is not to my taste but this is where I will be editing later. 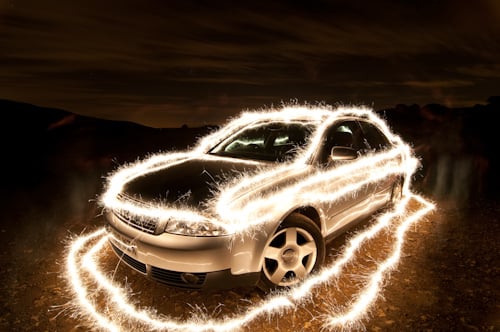 With editing the image I decided that the composition I chose where I thought the moving clouds may bring something to the image didn’t really work well, it would have added a bit of depth to the image but it wasn’t interesting so detracted from the image as a whole. Therefore I decided to get rid of it. I also went over the interior of the car to give some detail to the seats and dashboard that hadn’t received as much light as other areas.

As for white balance, this is subjective, the sparklers give a warm colour but I think looked too orange, I decided that I would increase the colour temperature slightly which gave the car back its silvery colour as well as make the sparkler lights whiter and more electric. This is up to you and may not work as well with other subjects where the colours are different. I then finally chose a tighter crop to get rid of the black space in the frame and focus on the car. All of this editing should leave you with something like my final image below.

As always, your final image is subjective and a personal choice. As well as the final editing, the great thing about these types of images is that each one will be unique and they are great fun to try either alone or with a friend or two. I really look forward to seeing some of your shots.

Some Random, Yet Important Notes

The downside to using sparkles is that they give off a bit of smoke and high light output – you will need to wear dark clothes when working with them.

it’s a good idea to turn VR (or IS for canonistas) off for long exposures as it can try and compensate for movement where there is none leading to image degradation.

if you are going to be shooting something reflective like a mirror or car etc take then make sure it’s clean to maximize reflections and save a ton of work in post.

As For safely, don’t be stupid, keep both you and your surroundings safe. I would recommend you wear gloves and something to cover your eyes.

Be aware that sparklers can throw out sparks so please don’t use them near to anything combustible or in dry grass, as always please use common sense. Have some water or fire extinguisher at reach should anything go wrong.

I hope you enjoyed this quick tutorial and if you have any questions please feel free to ask.

James Hastie an amateur photographer based in the UK. He mainly shoot outdoor scenes and landscapes. Give him a shout on his site or  Flickr stream. All photos on this article a copyrighted to James Hastie.

Freebies: Get 866MB Hi-Res Images Of Fire And Sparkles For Hot Editing

« Bokeh Masters Kit for 70-200, Kids With Cameras & Doing Some Good
How To Take Photographs For Manuals »