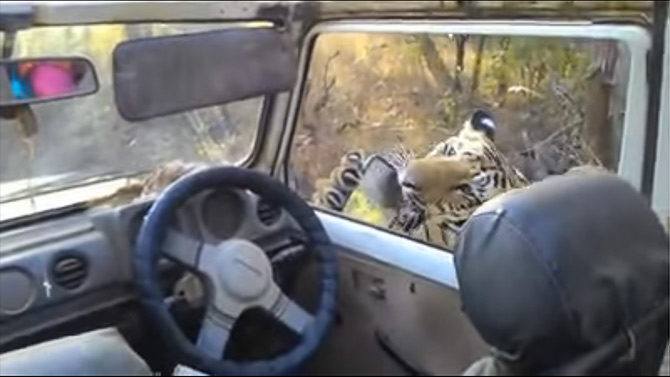 Wildlife and their habitat are facing a new threat—from unethical practices deployed by a new breed of nature photographers. An exponential surge in the popularity of nature photography is unknowingly altering species behaviour and creating habitat disturbances.

At the beginning of this year, a video in which a tiger was seen clawing and biting the rear view mirror of a safari vehicle in Maharashtra’s Umred Karhandla Wildlife Sanctuary went viral on social media.

In February, a safari route inside the Dhikala Zone in Corbett National Park, Uttarakhand, was closed for two days. The reason: a safari vehicle, full of camera-wielding tourists, went too close to a tiger to get close-ups, intruding in and disturbing the animal’s space. The tiger charged at the vehicle, sending the tourists into a tizzy. Mercifully, it was only a mock attack!

Another video was uploaded on YouTube in which a tiger was seen chasing a safari vehicle in Ranthambore Tiger Reserve, Rajasthan. Last year, panic-stricken tourists were filmed with two gaurs (Indian bisons) butting a vehicle with their horns in Kanha Tiger Reserve, Madhya Pradesh.

Now, in an effort to sensitize wildlife enthusiasts and photographers on species and wild habitats, India’s well-known names in wildlife conservation, including nature photographers, authors, cartoonists and conservation practitioners, have come together with collective inputs in a guidebook titled Stop! Don’t Shoot Like That: A Simple Guide to Ethical Wildlife Photography.

The guide, co-authored by Shekar Dattatri and Ramki Sreenivasan, co-founders of wildlife portal Conservation India, will be released this month.

“The craze for wildlife photography has increased, but unfortunately, there is no understanding of ecology or animal behaviour amongst most photographers. We have attempted to create an awareness that the quest for the perfect shot may be detrimental for the species and how repeated off-roading on a wild landscape harms the ecosystem,” says Sreenivasan.

In 2011, the BBC Natural History documentary Frozen Planet came under criticism for staging the birth of polar bear cubs in a zoo using fake snow. There are more instances in which wildlife filmmakers and photographers have been caught passing footage of animals in zoos as those taken in the wild.

In 2010, a tigress was found dead in mysterious circumstances in Bandhavgarh Tiger Reserve, Madhya Pradesh. Post-mortem reports revealed the cause of death to be grievous injuries inflicted by a vehicle. The tigress had three small cubs.

In 2009, the image of a “jumping wolf” by photographer José Luis Rodriguez won for him the prestigious wildlife photographer of the year award conferred by the British Natural History Museum. It was later discovered that the wolf was trained for the shoot. Rodriguez was disqualified. 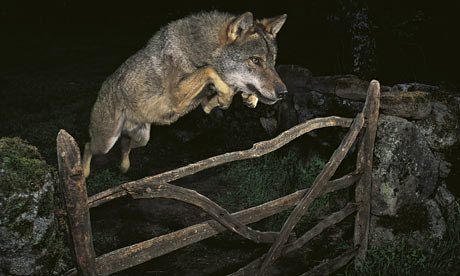 Photographs of wild elephants at sanctuaries charging towards the camera are often uploaded on social media sites and garner hundreds of hits.

This is the story of almost all tiger reserves and wildlife sanctuaries. With trigger-happy tourists indulging in nature photography as a hobby, there have been increasing reports of unethical practices provoking different species and altering their natural behaviour.

To what length should one go to get that perfect wildlife shot? Consensus has been that species or habitats should be left undisturbed and a certain safe distance should be maintained while clicking shots. But these safe imaginary boundary lines have been open to interpretation, with over-enthusiastic wildlife photographers repeatedly crossing the line and disturbing the ways of the wild.

Today, a tiger sighting inadvertently results in a traffic jam inside national parks—vehicles parked bumper-to-bumper, with not even an inch spared for the wild cats to move around. 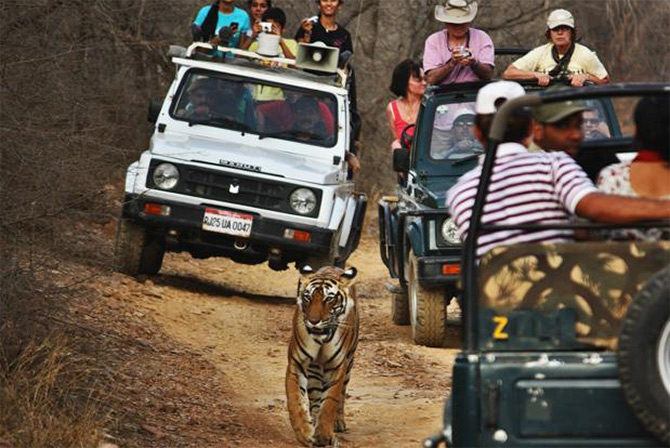 A tourism boom and the quest to explore newer territories, the digital revolution in photography, access to information on the Internet and mobile phone cameras have changed the very ethics of wildlife and natural history photography.

More than a decade ago, there were a handful of people who pursued wildlife photography as a passion. Those days of film rolls were not easy—one could take only 35 pictures per roll. Cameras, lenses and accessories were expensive and hard to come by.

National parks and sanctuaries had austere lodgings with no electricity and basic amenities. The Internet and mobile phone networks were unheard of inside sanctuaries. Only those driven by passion roughed it out inside wildlife parks.

The menace of unethical photography is becoming acute in protected wildlife areas where unfair practices are employed to get the desired photograph. “The current situation reminds me of the bygone era of shikaar (hunting) parties; the only difference is that the gun has been replaced by the camera,” remarked a senior conservation biologist, speaking on condition of anonymity.

Unscrupulous photographers are even using tools such as camera traps, bird-call recordings and playback (to entice birds) and remote-controlled devices used for scientific studies in the hope of capturing unique animal behaviour or rare species.

Insensitive photographers collude with greedy safari drivers and irresponsible forest guides to agitate and provoke animals for “action photography” for an award-winning shot. Conservationists opine that over time, such malpractices have altered the behaviour of large mammals, making them aggressive and stressful. This aggression is witnessed when the mammals migrate from one forest patch to the other through human-dominated landscapes.

Recent discoveries of new species and rediscovery of species once thought to be extinct have also propelled the surge in the popularity of nature photography. There is also a burgeoning market in the name of wildlife photography contests, which is pushing the bar even higher, tempting photographers to take that one unique shot which will set him or her apart.

The upside is that an increase in the number of people involved in nature photography has helped scientists and conservationists gather information on local flora and fauna from less visited and unexplored landscapes.

Take the instances of the Maguri-Motapung Beel, a wetland in Tinsukia, Assam, and Tadoba and Umred Karhandla in Maharashtra. A few years ago, these places were unheard of. But now, they have thrown up new records of bird species and tigers, partly due to the efforts of conservation photographers.

There are strict rules and regulations for tourists and vehicles inside national parks and wildlife sanctuaries. Some of them are: maintaining a safe distance from animals, maintaining silence (no shouting, hooting, catcalls or playing of loud music), no getting off a vehicle, no flash photography, avoiding wearing bright colours like red, no over-speeding or driving at night and no feeding of animals.

“The sad truth is that for every responsible photographer who respects nature and tries to minimize his or her impact, there are hordes of unruly, uncaring shutterbugs, who have become a menace to wildlife,” says Sreenivasan. “Most photographers probably don’t even think about their impact (ecological footprint) on wildlife habitats, and may regard animals simply as models that exist for their photographic pleasure.”

Birds, reptiles, amphibians and mammals that live beyond protected areas and forestland that aren’t patrolled by forest department staff are the worst hit. Without anyone watching them, photographers run amok, disturbing the habitats in which these soft prey live.

“One of the most disgraceful chapters in the history of wildlife photography in India is the bird nest photography craze that spread like wild fire in the early 1990s,” writes Dattatri. “The modus operandi was simple; scout around or offer rewards to villagers for locating active bird nests. Once the nest of a desired species was discovered, the photographer would do some ‘gardening’—a euphemism for removing leaves or twigs to get a clear view of the nest. With the obstructions out of the way, nesting activity would be photographed from all angles, sometimes with multiple flashes positioned around the nest.”

“Once the photographer finished clicking to his heart’s content, he would depart, leaving the exposed nest vulnerable to predators. Some went even further and destroyed the nest (bird eggs and chicks) to stall other photographers reaping from their find. However, even today, thanks to the despicable actions of those uncaring photographers, all nest pictures, including those that have been shot without disturbance, are viewed with suspicion.”

Such malevolent practices have been persistent with amateurs and professionals around the world. There have been several instances of fakery or forgery in photography and documentary films in the portrayal of animal behaviour.

The Conservation India guide reiterates and highlights most of the common problems plaguing wildlife photography like tourist vehicles inching close to an animal to provoke a snarl or charge. It urges people to avoid nest or den photography and clicking nocturnal animals and chasing animals and ground birds till they are exhausted.

There is a growing trend of catching and handling amphibians, reptiles and other small species to photograph them. The guide condemns the practice of refrigerating quick-moving reptiles and amphibians in order to slow them down or altering animal behaviour for prized photography. Conservation India is against baiting or enticing wildlife with food to get photos. Other alerts include speeding on forest roads, unnecessary off-roading and photography of critically endangered species.

Sensing the danger from photographers, even the ministry of environment and forests had to issue special guidelines curtailing photography of the critically endangered Great Indian Bustard during its breeding season. In March, when three bustards were sighted on the banks of the Tungabhadra river in Karnataka, the exact locations were not made public for fear of photographers disturbing the birds.

It is sad that, at times, the forest department’s energy is channelled towards managing tourism rather than ecological monitoring. Suspension of forest guides, safari drivers and patrolling staff involved in malpractices is common, but it hardly solves the problem.

According to Dattatri and Sreenivasan, it is impossible to catalogue or list all types of “unethical” practices; common sense is the best guide. “If you believe that something you are doing, or are about to do, may cause distress to your subject, or damage its habitat, simply back away,” they write.

A combination of one-upmanship, over-enthusiasm and ambition to be famous is driving people to get what they want. Moreover, to be seen roaming in the wilderness all the time and posting stunning photographs is perceived as cool.

With easy access to information, technology and quick fame, amateur nature photography is now a threat to the very species and wild habitats it looks to celebrate.

Ananda Banerjee is a conservation journalist, wildlife writer for livemint, birder, graphic designer and author based in India.  You can find out more about him through his website, or reach out to him through Twitter.  This article was originally published here, and used with permission.