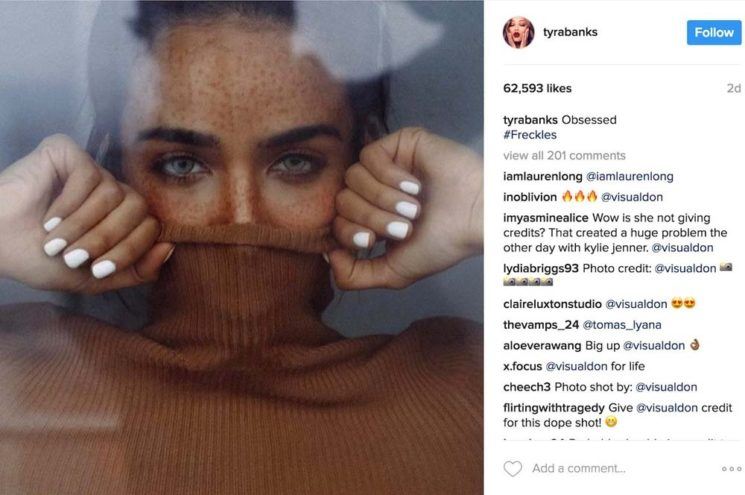 Has anyone used your photo without permission or credit? What would you do if it was a worldwide famous supermodel, posting your photo to millions of her followers without crediting you? This is exactly what happened to photographer Don Mupasi. Tyra Banks posted one of his photos to almost 5 million of her followers without crediting him as the photographer. And it seems he’s not the only one whose photo she used.

Tyra Banks wanted to show the world that she is “obsessed with freckles” (as if anyone cares). So, she felt free to post a series of photos featuring wonderful freckled models. None of the photos is hers, none is credited, and I suppose none of the photographers was asked for permission either. One of the photos was made by UK-based photographer Don Mupasi.

When Don noticed his photos on Tyra’s Instagram, he tried to send her a direct message. Of course, she didn’t respond. You can’t blame her for this; I suppose her inbox is flooded with messages, so she probably didn’t even see it. But you can blame her for posting photos without crediting the photographer. It’s unethical, even illegal to do it.

Don says it would’ve been enough if she at least tagged him, because it would be a great free promotion. But as she didn’t do it, people started flooding the photo with comments where they mentioned the photographer. Don says a few other photographers sent him a message saying that she’s done it with their work, too. So it’s probably nothing new.

In the end, Tyra (or whoever runs her Instagram) seems to have noticed gazillion comments mentioning the photographer. This resulted in deleting the image from her Instagram profile. However, other photos remain there. None of them is tagged with the photographer’s name, and they just serve so Tyra can say “J’adore #Freckles”. So deep.

Has something like this ever happened to you? How did you deal with it and did you manage to resolve it? Do you think this is how this story is supposed to end? I would love to hear your thoughts in the comments.

Videographer pleads guilty to “Unauthorized Photography,” world does not implode