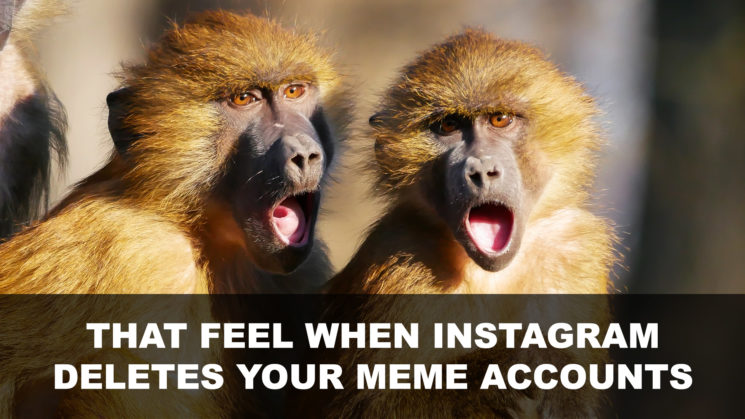 The “curated” content Instagram feeds. We all know them, we’ve all seen them, maybe we even follow one or two. Such accounts don’t actually create anything of their own, instead relying on other people to create imagery which they can then share to their own feeds in order to try to build up some kind of audience.

Ok, to be fair, the reputable ones do ask permission first. But some of these accounts are dedicated to just posting memes. So, Instagram had what’s being called the “meme purge” recently and deleted a bunch of them. Accounts followed by millions of people. Now, the creators of those accounts are moaning about losing out on hundreds of thousands of dollars of income.

Insider reports that one Instagram user told them his income from selling promotions on their account has helped her to fund her way through college, and others claim they’re making in excess of $200,000 per year on these types of accounts. Now, it’s all gone for those people.

Instagram seems to be working hard to get rid of some of the negativity that’s been surrounding the platform over the last few years since being taken over by Facebook. It’s started removing the likes counter from feeds in some countries in an attempt to bring the focus back towards the images and not how popular they already are. A decision that’s already sent a number of high profile Australian influencers crying about lost income.

Now, it seems to be doing something about those who are profiteering from appropriated content, specifically memes, in this case. Insider saysw that the accounts have been permanently banned for violating Instagram’s terms of service, although Instagram has not yet made a statement to say exactly which terms these accounts have breached.

@instagram you just deleted all of my accounts for absolutely no reason, no warning, and no context behind this. (30 million+ followers worth of accounts deleted in 24 hours) #fuckinstagram #reactivateyerdank #reactivateautist pic.twitter.com/nJY6CvkQkW

A Facebook representative did tell Insider, though, that selling promotions through a network of accounts does not violate Instagram’s terms of service.

Recent announcements regarding a change in Instagram’s banning procedure, though, might be the cause. It’s possible that it wasn’t one thing that’s caused these accounts to suddenly become banworthy. It may simply be that those accounts have been reported so often and had so much content removed in whatever Instagram’s given time period is, that they now qualified under the new system for a ban.

It seems, though, that these accounts weren’t notified before they were banned, and were simply gone overnight.

Whether similar will happen on Facebook remains to be seen, as does Instagram’s next move to try and clean up its platform.