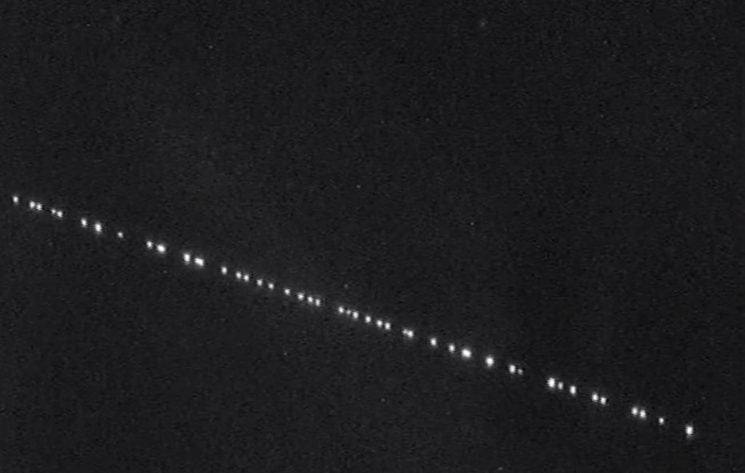 On 23 May, SpaceX successfully launched its first 60 Starlink satellites into orbit. Amateur astronomer Marco Langbroek managed to catch them on camera, and he filmed a spectacular view of the “train” of satellites orbiting around the Earth.

Shortly after the launch, on 24 May, SpaceX confirmed that all 60 satellites had been successfully deployed. The goal of this ambitious project is to provide global internet coverage from space.

It wasn’t long after the launch that Langbroek caught the satellites on camera. He used a WATEC 902H astronomy camera paired with a Canon FD 1.8/50 mm lens, and equipped with a GPS time inserter. The first video he posted was captured about 22.5 hours after launch. It shows the “train” of bright satellites passing over Leiden, the Netherlands, and it’s absolutely spectacular.

Langbroek posted two more videos, one captured about half an hour before, and the other about an hour after the first one. He writes that, using the orbital information, he had calculated a search orbit and then stood ready with his camera.

I find it interesting that the unusual sight of the satellite “train” caused a flood of UFO reports all over the Netherlands. Langbroek explains that in the coming days, the objects will be making two or three passes each night. However, as they are actively maneuvering, they will be more spread out with each pass, so they won’t keep this formation for much longer.

« The Panasonic S1 & S1R have a “hidden” 10-bit 5K video mode with massive 200Mbps bitrate
How to make a DIY smartphone gimbal with just a mop, paint roller and tin cans »