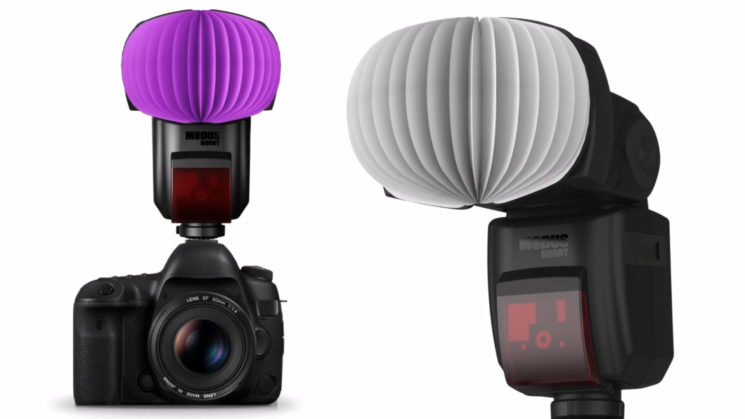 I haven’t quite made my mind up about this one yet, and I think I’d actually have to try it – or at least see some results shot using it vs a regular Stofen style diffuser – before I’m able to, but Irish accessory manufacturer, Hahnel has released a new speedlight diffuser that’s… Well, it’s interesting, to say the least.

The humble Stofen style diffuser has been around for years and serves 99% of people quite well. The other 1% believe that other products will serve them better. Whether or not this one will, though, I’m not entirely sure. I love the concept and would be very happy to know that it works to diffuse the light while offering better output performance than the existing options, but I’m not convinced.

It’s called the Lantern Diffuser and comes as part of Hahnel’s new Creative Lantern Kit. The kit as a whole was shown off a week ago, and looks to retail for around £60 here the UK, but Hahnel has only just started posting videos and revealing more information about it today.

Hahnel says that their new Lantern Diffuser fits on the majority of on-camera speedlights – so, probably just about everything except the Godox V1 and Profoto A1. The Creative Lantern Kit comes with the Lantern Diffuser, along with a bunch of gels and an adapter to hold them.

Now, while I have no idea how good the spread of light is from these, nor how much juice they might suck from the light as it passes through and comes out the other side, it does offer one pretty cool benefit. It folds up flat and comes with a small wallet in which to store the entire kit.

If you use multiple speedlights that you need to diffuse on a shoot, especially if you need to gel some of them, then this could prove to be extremely useful to help you pack lightweight (which is probably why you’re using speedlights in the first place) in as small a space as possible. And even if you’re only using a single speedlight, the ability to just whip this off the front fo the flash and stick it in your pocket could be invaluable at a busy event.

The Hahnel Creative Lantern Kit is listed on the Hahnel website, but the only place I’ve seen it available to pre-order so far is from CVP in the UK, where it’s retailing for £59.99. There’s no word yet on exactly when it’ll ship, if it’ll become available in the rest of the world, nor how much it might be.