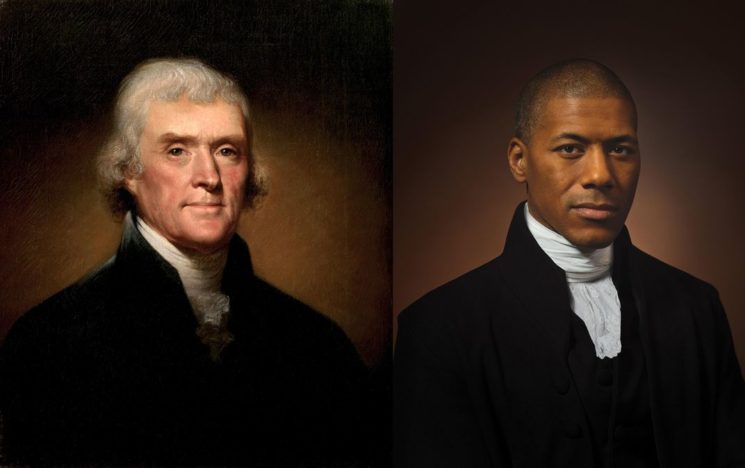 Photographer Drew Gardner recreates portraits of some of the most famous historic figures, but not with just anyone. He photographs their direct descendants and recreates the iconic portraits to the finest details. One of the latest recreations he made was done with Shannon LaNier, a news anchor, an author, and the sixth great-grandson of Thomas Jefferson.

Drew’s project The Descendants started as a personal project, driven by his passion for history. He finds direct descendants of important historic people, verifies their lineage, and then takes their photos. He pays attention to every little detail: clothes, props, facial expressions, lighting.

While many of Drew’s recreations are based on photos, this one was based on the famous portrait of Thomas Jefferson painted by Rembrandt Peale. As usual, Drew carefully examined every detail, and even used authentic clothes from the 19th century. But instead of using brushes, paint, and canvas for his recreation, he used a Fujifilm GFX 50S and a Zeiss Otus 85mm f/1.4 lens.

The star of this portrait, Shannon LaNier, is a television host at CW39 in Houston, Texas. He is also a co-author of the book Jefferson’s Children: The Story of One American Family. The Descendants was also featured on Smithsonian magazine, and Shannon shared some of his thoughts about the project and the photo he posed for.

Shannon told Smithsonian that he has complex feelings about being Thomas Jefferson’s descendant. “He was a brilliant man who preached equality, but he didn’t practice it,” he said. “He owned people. And now I’m here because of it.”

Even though Drew carefully plans out every photo and recreates even the tiniest details, you’ll see one big difference here: Shannon doesn’t wear a wig. He chose not to do it, as he told Smithsonian. “I didn’t want to become Jefferson,” he said.

There is a video that will take you behind the scenes of Drew’s photo shoot with Shannon. You can watch it here, and make sure to check out Drew’s other work on his website, Instagram and YouTube.