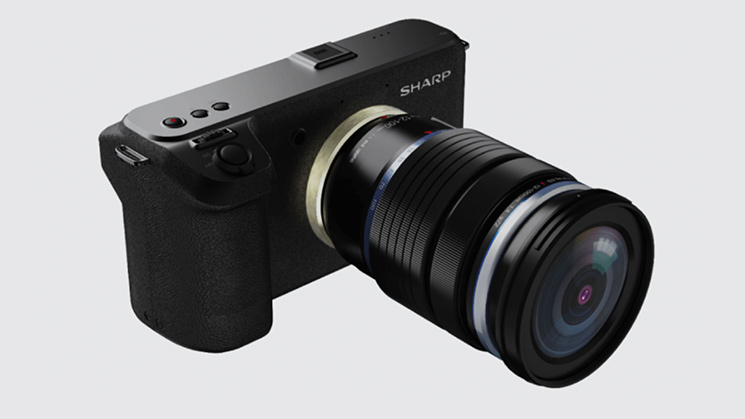 It’s been a minute since we’ve heard anything new about Sharp’s interchangeable lens 8K Micro Four Thirds camera, but it looks like they’re trying to take some of the attention away from the upcoming Canon EOS R5 announcement by adding it to the 8K page on their official website

They haven’t added a dedicated page for the new camera yet, or announced any new information or specs, simply listing it as “under development”, but the timing of the addition is quite interesting.

The website lists it as “The world’s smallest interchangeable lens 8K video camera”, and it probably is. Looking at it, it’s probably not that much bigger than something like a Panasonic G100 – except without that big ugly viewfinder on top.

The Sharp 8K camera was first shown off at CES 2019 last January, 18 months ago, but Sharp remained fairly tight-lipped about the specs. We knew it shot 8K, obviously, which they said it could manage up to 30 frames per second, with a view to working on 60fps. It was said to shoot h.265 to a single UHS-II SD card and featured a 5″ flippy out touchscreen LCD – although it seems somewhat overkill for vlogging.

In January of this year, also at CES, we got to find out a few more features from an interview during CES 2020, with an anticipated release date at some point this year.

As for the specs, this is how they looked the last time we heard any new information…

It doesn’t quite hold up to the impending Canon EOS R5, with its full-frame 8K RAW, but it still doesn’t really look all that bad.

What will be interesting, however, is how the pricing holds up. Originally the Sharp 8K was expected to be around $5,000. At CES 2020, they revised that to $4,000. But with the EOS R5 also expected to be somewhere “under $4,000“, I wonder if the Sharp 8K camera’s price will again be revised, otherwise, it may struggle to compete.

Guy tries to mimic a beer commercial and drops a $70,000 camera at CineGear Expo