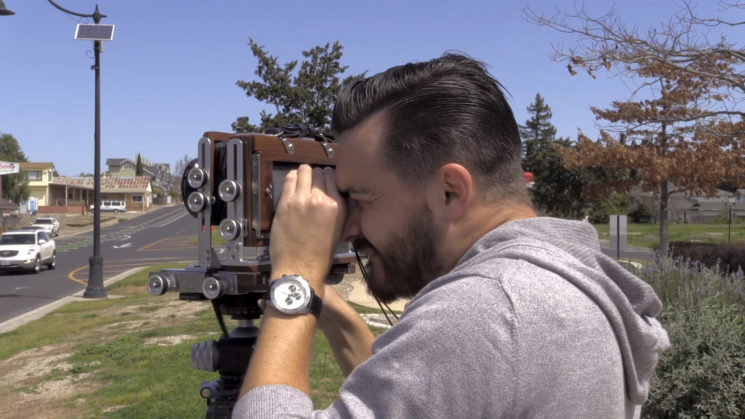 Sometimes, we see something that we want to make a photograph of. But we don’t just want to grab a quick snap and go on our merry way. We instantly have a vision in our heads. We know how we want that final image to look. But we can’t. We don’t have our gear with us, or it’s the wrong type of weather or time of year. Whatever.

That’s how photographer Nick Carver felt when he stumbled across this liquor store while visiting his future in-laws in Santa Barbara. Instantly he fell in love with it and knew he had to photograph it. He’s been waiting a long time to do it, but he finally has, and he documented his process of shooting it on super wide 6×17 medium format film.

Nick had taken some scouting shots of the liquor store on Polaroids during previous trips. He wanted to see how it looked from different angles to figure out exactly how he wanted to shoot it.

When he went back to shoot it for real, Nick used his iPhone with the Mark II Artist’s Viewfinder app for iOS. This isn’t a free app, or even inexpensive, at $27.99, but if regularly use your phone for location scouting and want the versatility it offers, it’s a pretty cool looking app. One of the benefits of this app over similar software is that it supports many of the popular addon lenses you can buy for iPhones. Nick uses a wide angle to simulate that super wide field of view he’ll get with his 6×17 camera. 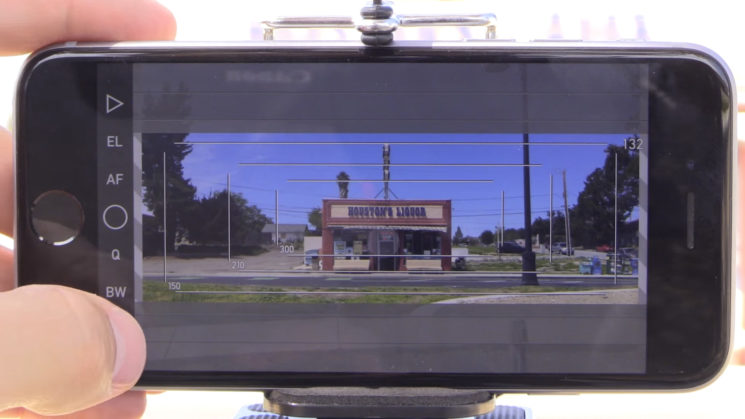 Nick had originally planned to shoot the shot at dusk. But having now found two compositions that he likes, he decided to shoot a couple in the bright daytime sunshine, too. The first shot was at an angle to the store, but the second was the original image Nick had pre-visualised when he first saw the building.

A great shot with the small building surrounded by such empty space. But it’s when the sun goes down that the scene really comes to life. The neons in the window come on, as does the sign for the building itself, with half of the letters not even coming on, which just adds to its charm.

But Nick wasn’t finished quite yet. He wanted the environment to be just a little darker. But while waiting, a truck pulled up in front of him and parked, covering a large chunk of his shot.

When you’ve spent all day waiting to get just one shot, this is the worst thing that can happen. Fortunately, a $20 bribe convinced him to park elsewhere (the trucker said no to the money, but Nick insisted). Unfortunately, another car parked across the street, and with the light fading fast, Nick had to act to get the shot.

Ultimately, while Nick liked the shot, he was pleased that he decided to get the earlier shot without the car. The car’s addition to the scene just didn’t create the mood he hoped to capture. He got one more capture of the store from an angle with the street lamp across the street. It’s a very cool, but somewhat spooky shot.

What drew Nick to this building were its imperfections. And even more imperfections showed up in the burned out lights as the sun went down.

So, while he went out with the goal of getting one good photo, he ended up getting a couple. And while I love the front-on view, I think the angled shot with the street lamp and the darkened sky is my favourite of those shown in the video. I don’t know why, either. It just has a mood and feeling about it that’s sparking some kind of memory or emotion in my subconscious.

It seems that for Nick, it was well worth putting all that time, thought and effort into photographing this building.

You can find out more about Nick and his work on his website.

Standing in Front of More Interesting Stuff…And Other Good Advice

« Your drone will soon need to have a visible license plate
Want to buy a RED camera? The company is dropping prices and simplifying lineup »