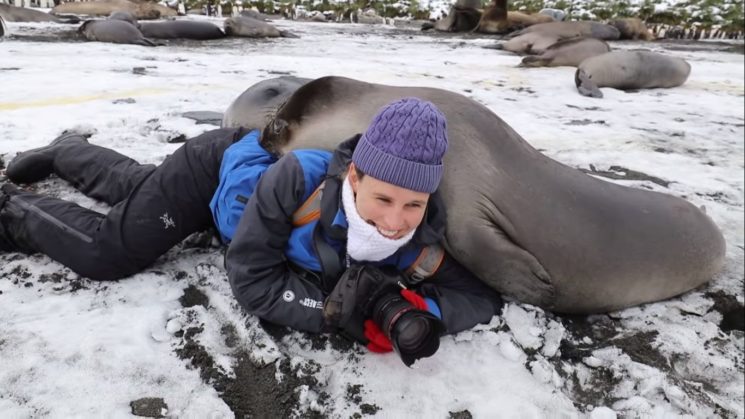 Wildlife photography can be really rewarding, but it doesn’t come without its dangers. Australian photographer Chris Bray recently shared a video via ViralHog showing “the hazards of being a wildlife photographer.” The video shows his wife Jess getting squished by a couple of curious baby elephant seals, and I think this is what cuteness overload looks like.

Chris writes that the encounter took place during his and Jess’ photo tour to Antarctica and South Georgia. The couple was shooting at a gravel beach filled with king penguins and elephant seals, and Jess laid down on the ground to get some low-angle shots of the penguins. This is when one of the baby seals approached to investigate her, and another one soon joined.

“Before she knew it, she was being squashed by several of these 100kg+ adorable animals, snuffling, burping and sniffing all over her,” Chris writes. He adds that the same thing happened to him and a few of their photo tour guests. But he filmed Jess as the adorable animals approached her for cuddles.

Of course, you’re not allowed to go too close to the wild animals. “But it’s a different story when they come up to you,” Chris adds. Jess eventually managed to “escape” these guys and although they are quite heavy, she was unharmed.

Luckily, Jess didn’t get squished by an adult seal, as they can weigh up to 4,000kg (8,800 lbs). Some wild animal encounters can be quite scary. Many that I’ve seen involve polar bears (like this one or this one). But just like in this video, there are contacts between wildlife and people that are just adorable and harm no one, neither animals nor humans. And those are the encounters I really love seeing.

[The Hazards of Being a Wildlife Photographer || ViralHog via The Phoblographer]