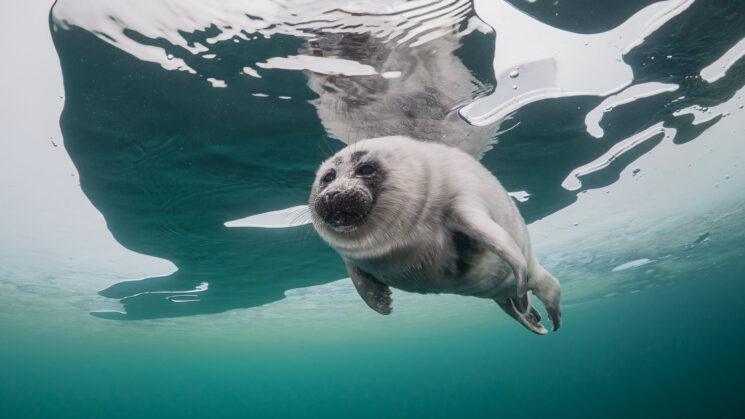 Lake Baikal is the deepest and the oldest lake on Earth. Its icy surface is extremely photogenic, and people travel thousands of miles just so they could take photos at this magical place. But there’s another unique feature of this beautiful lake. It’s home to the Baikal seal or nerpa, one of the smallest pinnipeds in the world that could be found only in this lake.

Russian photographer Dmitry Kokh (previously) was on a mission to photograph this incredibly cute, but also incredibly shy creature. After a failed attempt two years ago, he gave it another shot and took some amazing photos of nerpas both above and below the icy lake surface. He kindly shared some photos with DIYP, and I’m sure you’ll love them as much as I did.

Photographing nerpas was challenging for several reasons. First, as I mentioned, these animals are pretty shy and won’t easily come near humans. Thankfully, their pups are curious and they won’t hesitate to approach you. But there were the logistic challenges: Dmitry needed to pick the perfect time of the year when the lake is still frozen yet it coincides with the specific moment in young nerpas’ lives.

“Nerpas females give birth in March, in snow-covered burrows on the ice,” Dmitry explains. “Newborn pups are covered with white fur, they cannot swim yet, and it’s not really possible to get close without harming them.” This is why Dmitry needed to wait until April when the lake’s still frozen but the pups are grown enough to explore the depths of the lake.

Finding a seal’s burrow was another challenge Dmitry faced in the vast, icy desert. But with the help of a local trained dog Pulka, this was almost a piece of cake. “The seal’s burrow has an exit to the lake from under the ice,” Dmitry explains. So, the plan was to locate it, to dive in, and then patiently wait for nerpas. 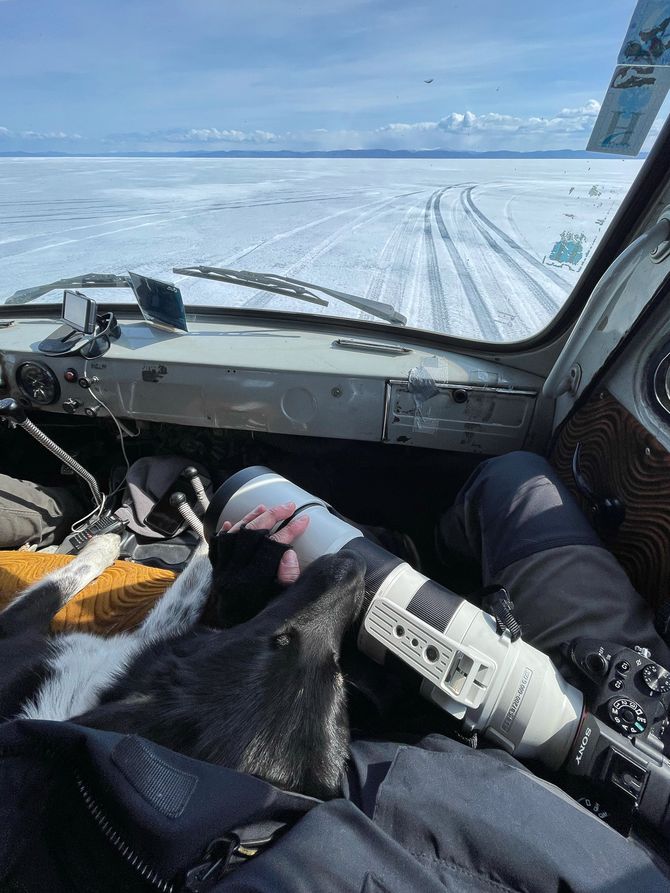 Judging from Dmitry’s story, diving under the Lake Baikal’s ice is an otherworldly experience even without taking photos:

“First time, we were diving next to a giant crack in the middle of the lake. These cracks were formed due to temperature changes and can be several km long! They can also change shape and size during the night, which is an obvious concern for people driving across the lake, as they need to be on high alert and find alternative routes. The surface of the ice is visually incredible, but underwater – the cracks look even more phenomenal – huge ice blocks are layered on top of each-other forming caverns and passages. And when you’re inside these passages, you cannot stop thinking about the 1 km of depth below and an endless ceiling of thick ice above you. The only way back is a small hole in the ice a hundred meters away – a precious window to our world.” 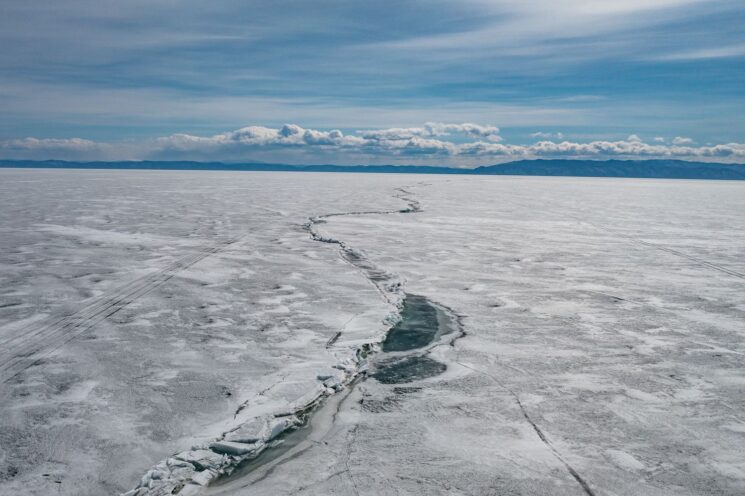 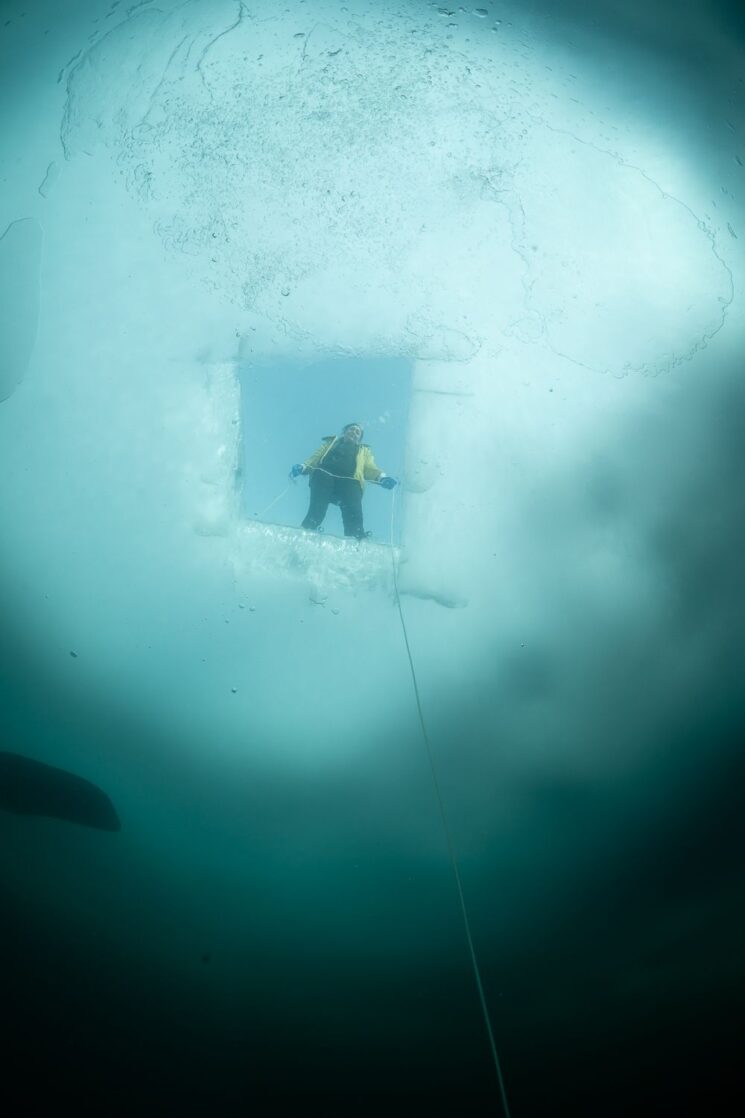 What seems even cooler (no pun intended) is diving under the “ice cloud.” “It’s a massive ice formation, which is formed in the beginning of winter when strong winds move huge floes along the water,” Dmitry explains. “Rapidly changing light and different colors really give an illusion of being under some fairy tale sky. Pretty cold fairy tale though! :)” 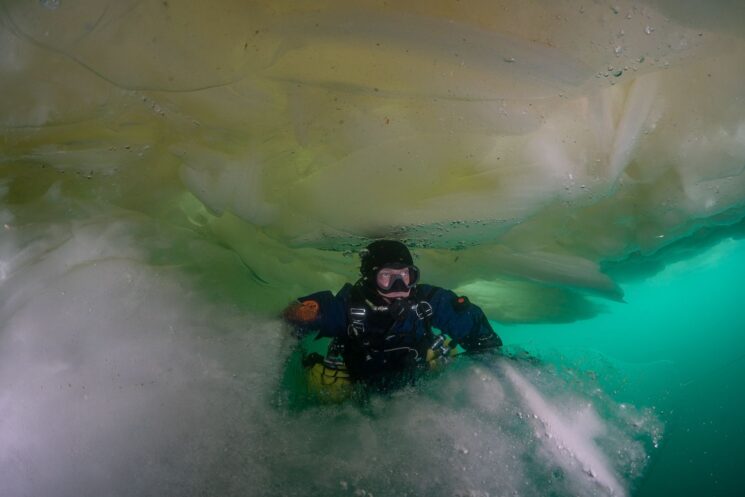 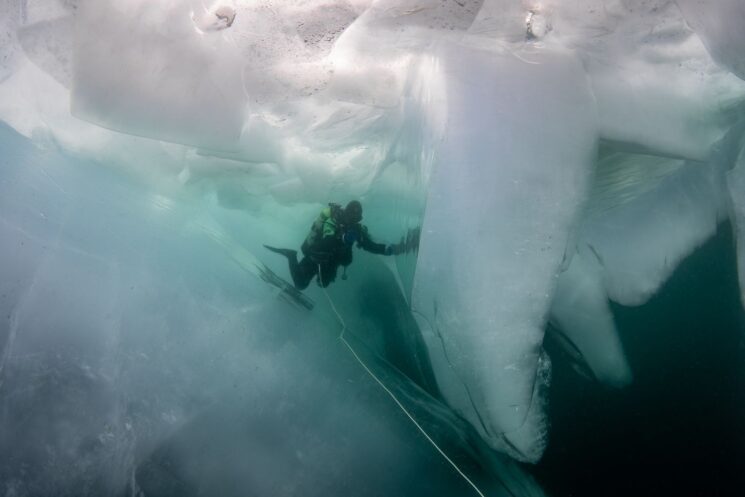 It took a few dives to find the burrow from beneath. And as he was slowly approaching, there it was – a little nose of a nerpa pup. It was curious about the creature loaded with diving and photography gear. While keeping distance, it was making circles to get a better look at the unknown being. So, it stayed with Dmitry for around 15 minutes – just enough time to take some amazing shots. 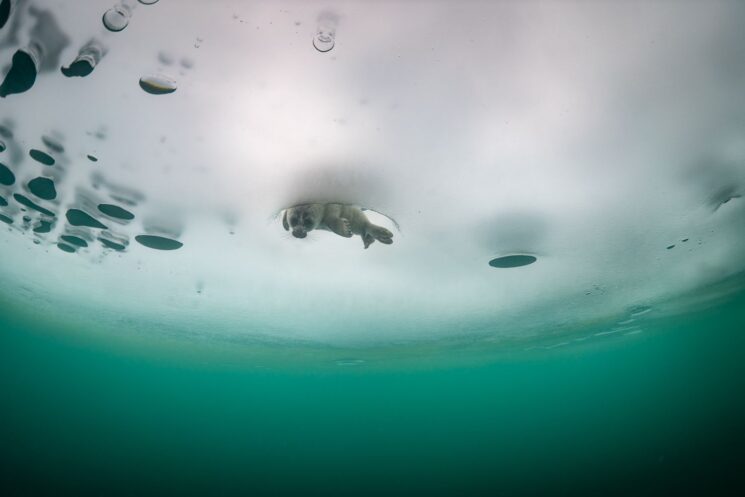 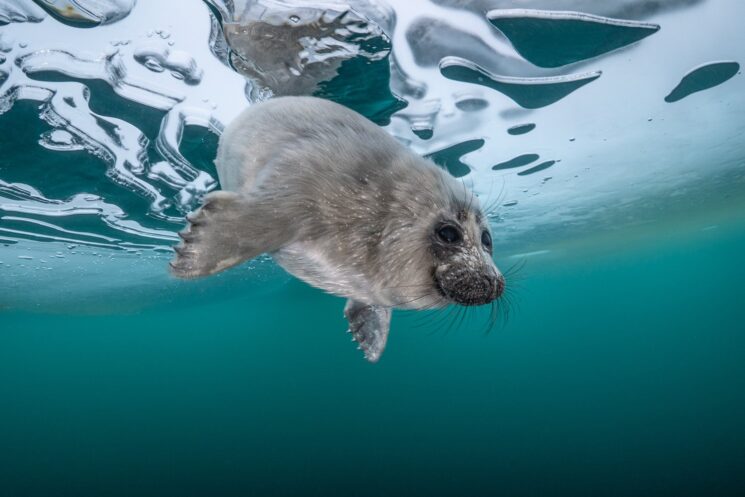 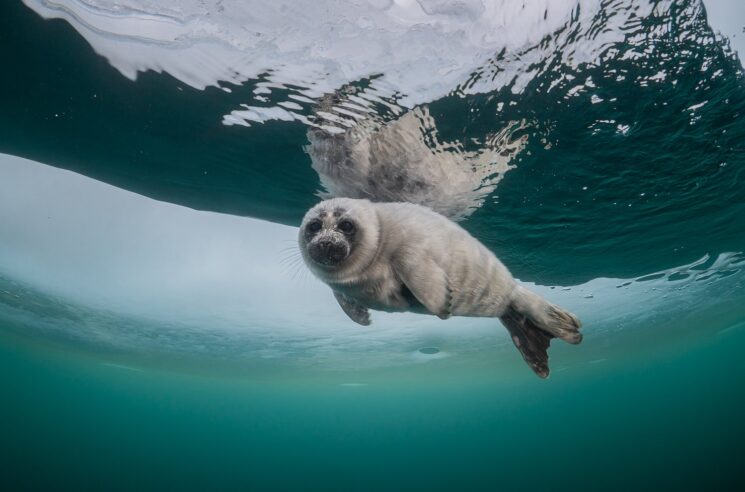 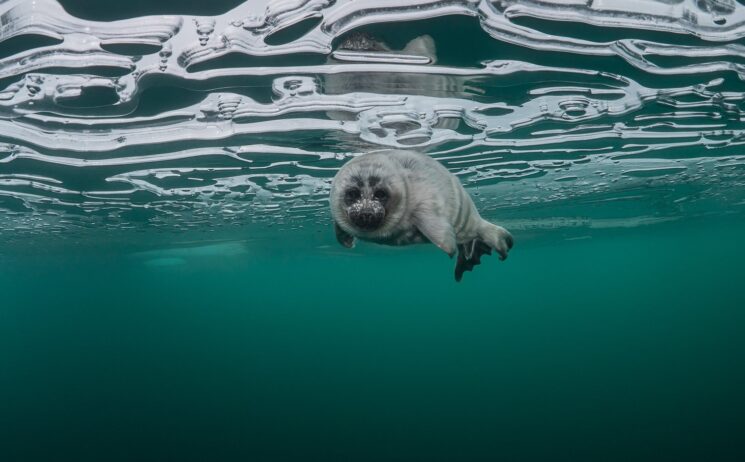 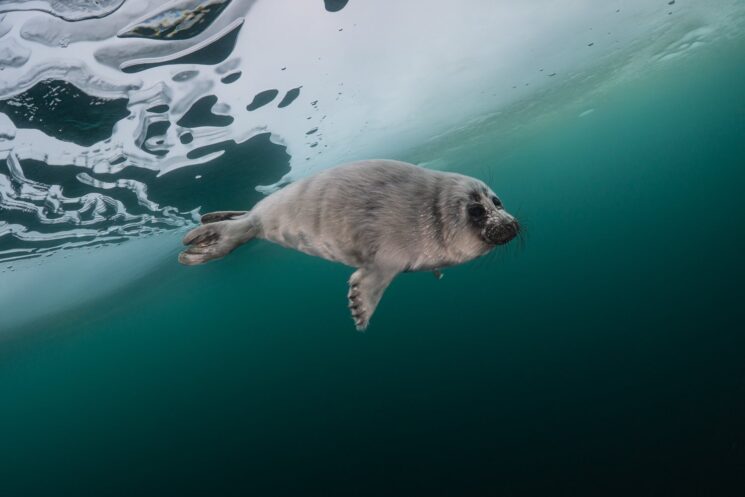 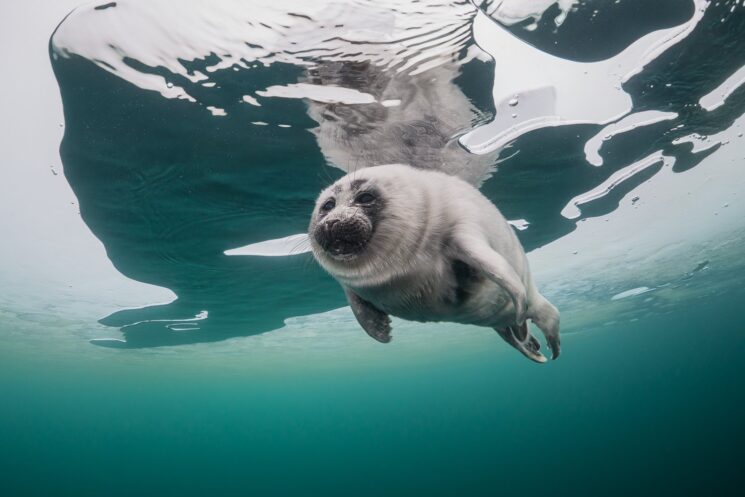 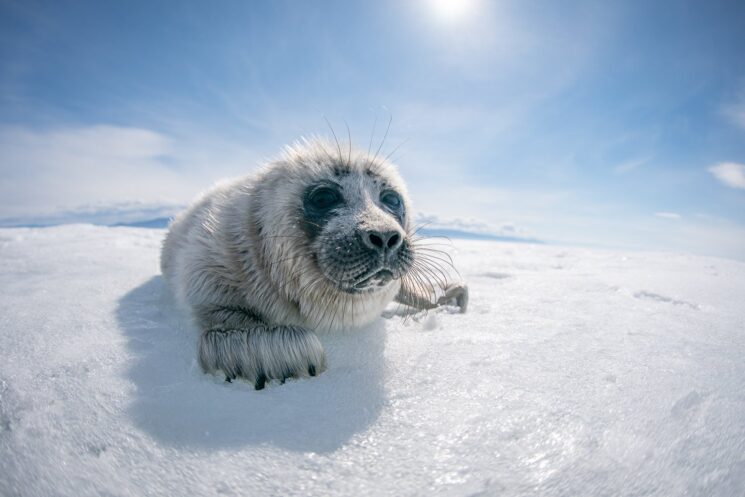 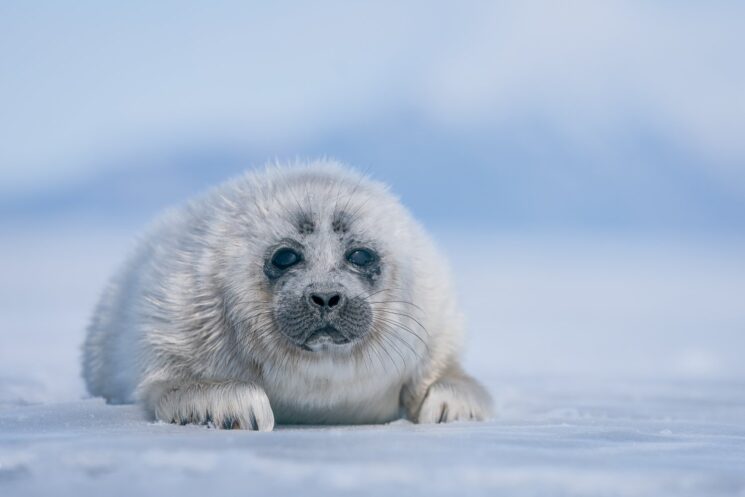 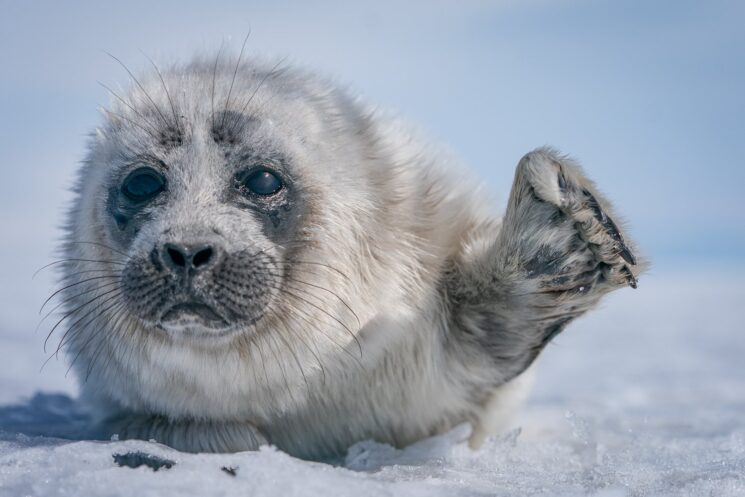 This photographer got squashed by adorable baby elephant seals