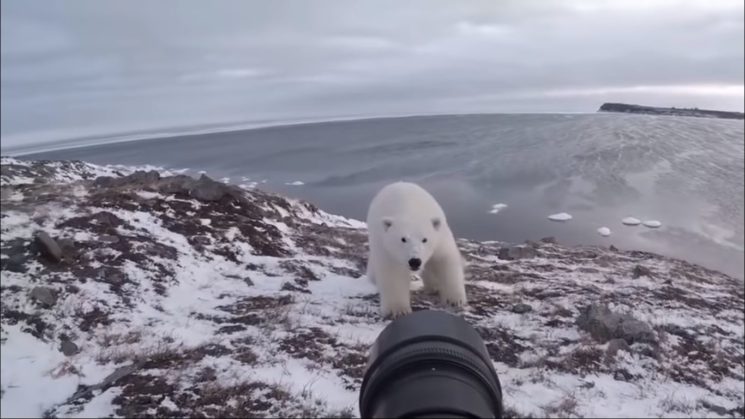 We’ve seen a couple of encounters of photographers and bears so far. This video from RM Videos shows a polar bear that got too close to a photographer and did it more than once more than once. But the photographer kept his cool stood up to the animal each time, and then casually went on taking photos.

The bear in the video seems young, but it’s still large. After all, there can possibly be other bears around. Still, the photographer Maxim Deminov seems pretty confident in his encounter with the animal. As you can see in the video, he chases the bear away every time it gets too close to the camera, and then just keeps shooting like nothing happened.

MNN.com writes that bears “don’t want to attack people.” Even when they do it, it’s usually because they’re startled or starved, or when they’re protecting their young. Still, I’m not sure I’d be willing to take a risk like Deminov did. After all, some of these encounters we’ve seen so far didn’t end well.

This particular bear seems very curious about the camera. When the photographer chases him away, the animal gives up its exploration and runs away – but still returns to check out what’s going on. Maybe the bear just wanted to help Deminov out. Or to become a photographer itself, like this one.

[Fearless Photographer Stands Up to Polar Bear – 994513 via FStoppers]