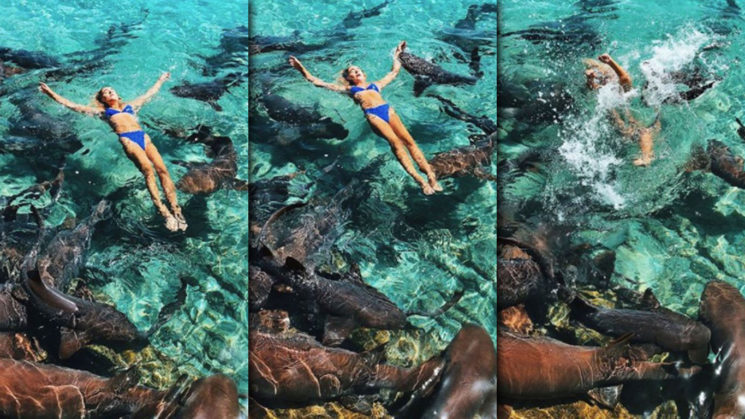 Shark Week is just around the corner, but it seems one lady decided to get into the spirit of things a little early. The BBC reports that “Instagram model” Katarina Zarutskie was on vacation in the Bahamas with her boyfriend and his family. Naturally, she wanted to make the most of the beautiful environment for her feed, so photos were taken.

After spotting people snorkelling and interacting with a pack of nearby nurse sharks, she decided that this would be a great opportunity for photographs. She says she saw it as an opportunity to “connect with nature”. Well, one opportunistic shark decided to connect with Katarina and then proceeded to drag her under the water.

While floating on her back, a nurse shark grabbed Katarina by her arm and then dragged her under the water. She did manage to break loose, standing upright and raising her now-bleeding arm above the water. The whole incident was captured on camera by her boyfriend’s father, who carried on shooting during the entire thing (sorry, what?).

The BBC reports that she remained calm during the incident, and proceeded to head out of the water as quickly as possible, holding her arm aloft.

A native of Southern California, 19-year-old Katarina is no stranger to the ocean and is due to start a double-degree in nursing and business in Miami. She tells the BBC that from previous experience she knows that “nurse sharks are usually very safe”, and the fish have become something of a local tourist attraction.

Katarina, who has around 30,000 followers on Instagram, has since turned her profile private due to the deluge of troll and abusive comments she’s received since.

One can hardly blame her, really.

Nurse sharks don’t typically attack people, but as this story proves, it certainly does happen. So, be careful out there, folks. They’re still wild animals.