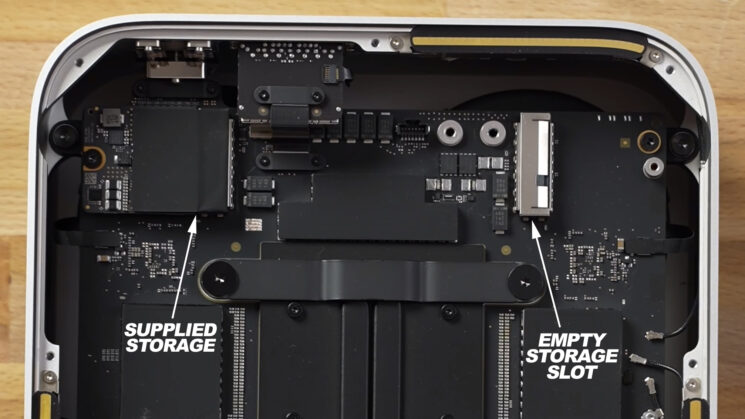 The big news amongst the general creative world this week has been the release of the Apple Mac Studio, carrying its shiny new M1 Ultra chip. There have been a number of totally unbiased “reviews” of the new system all over YouTube but Max Yuryev at Max Tech has actually taken one apart so we can take a look at its insides.

The new Mac Studio comes in a very tiny package for the amount of power that it boasts, but the teardown reveals that at least parts of the system might actually be upgradeable, thanks to two SSD ports found internally in the system – against official Apple advice.

Max points out in the video that the official word from Apple is that storage in the Mac Studio is “not user accessible” and that if users think they’ll need more storage in the future, they should just “consider configuring to a higher capacity” computer now when they order. Naturally, Apple will say something like this as they want you to buy into the more expensive system right from the get-go. But it is possible that Apple might release an official upgrade option in the future as they did for the Mac Pro.

It’s clear from Max’s video that the Mac Studio is extremely tightly packed in there and taking one apart is definitely not for the faint of heart, but it also looks like it might be possible to add extra storage to the system without doing any more dismantling beyond removing the bottom cover.

It will be interesting to see if Apple does actually release a future storage upgrade pack for the Mac Studio – or if 3rd parties like OWC manage to produce one – but it looks like there’s a feature in place for it, even if Apple’s current position is basically that the second empty socket doesn’t essentially exist for now.