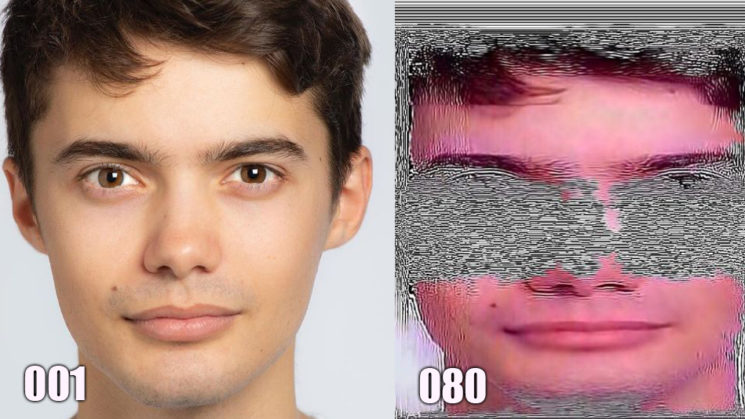 Austrian photographer Janick Entremont recently performed an interesting experiment. He took a photo of himself and uploaded it to Instagram. Then he downloaded it, posted it again, and repeated this process 340 times to see what will happen. Thanks to Instagram’s compression, he ended up with a completely unrecognizable final image.

Janick made a separate Instagram account for his project, which he titled @facetinction | A (con)temporary portrait. Here is the original image he took and uploaded:

Here’s what was left after 80 downloads and reuploads:

And here’s the final image he got after repeating the process for 340 times:

The loss of quality and detail in the images is the result of generation loss. Basically, it’s like making a copy of a copy of a copy… over 300 times, in this case. Artist Pete Ashton did a similar project back in 2015, but with a significantly smaller number of images. For his project I Am Sitting In Stagram, he uploaded the same image 90 times, but still ended up with a quite significant quality loss.

“Quality loss and alienation of the picture are consequences of an algorithmic compression,” Janick explains. “What will last from your digital data? Not existing faces are created – instead, some that already exist are arranged to fit. Being altered and changing becomes one. Until nothing is the same anymore.”

Even if it had been done just for fun, I’d still find “Facetinction” amusing. It’s also pretty admirable when you think of the time and patience invested in downloading and uploading the same photo over and over again.

But, there’s more to this project than doing it just for fun. As Janick tells PetaPixel, this project is relevant for him on many levels: “the handling of our digital data, online or offline, and the flood of images. How improper use of social media changes our well-being and our appearance (regarding trends). Up to the constant surveillance and face recognition as it is common in China.”

What Happens When You Go Through An Upload/Download Cycle From Youtube 1,000 Times

What happens when a major photo magazine shuts down?

What happens when more than 1,000 edit the same photo?

« Sharp’s 8K camera will ship this year with a price point aimed under $4,000
Hasselblad’s new 45mm f/4 “P” lens is the ideal street photography lens for their X mirrorless system »