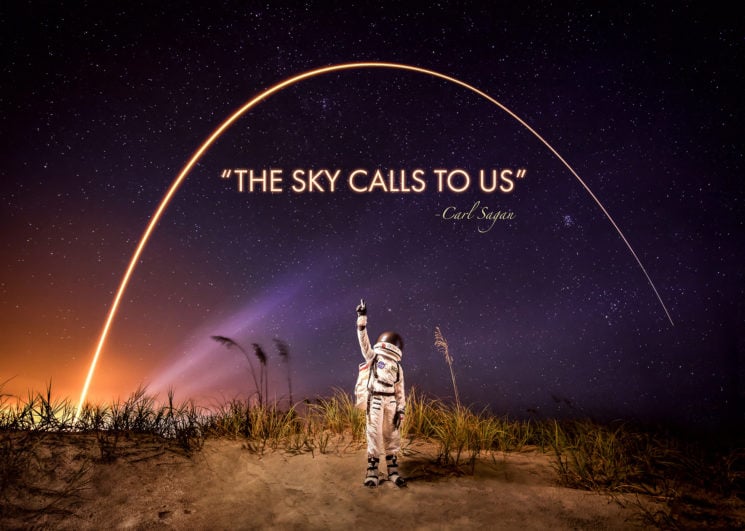 Erik Kuna is a Floridian photographer shooting for SuperCluster, a creative agency sharing the story of space to everyone, and instructor at KelbyOne. Kuna has taken revolutionary steps in rocket photography, employing techniques never used before to create amazing cinemagraphs and images. Those are more than merely documentary, they’re art. We’ve asked Erik to share the story behind one of his pictures with us, and it’s seriously cool.

Erik had the idea to incorporate his daughter into a shot, and what a shot it is. Taken in some dunes not far from Cape Canaveral, it depicts his daughter as an astronaut. Behind her, the $1.5 billion project soars across the night sky. The trajectory of this rocket, headed to the Sun, is a perfect arc. It all came from precision planning, and Erik has some hot tips to share with anyone planning to shoot rocket launches.

First up, the rocket here is the Unitecd Launch Alliance (ULA) Delta IV Heavy carrying the Parker Solar Probe, launched on August 12, 2018. The image Erik produced is a composite stack of three images, all shot during the launch window. The term ‘launch window’ is simply the expression of the window of opportunity where the rocket may launch, determined largely by weather conditions. It’s the result of forecasts by NOAA, NASA, and USAF, and involves meticulous planning. They usually last for several hours and can be postponed or adjourned at the slightest discrepancy to the forecast. Shooting a rocket with the level of creativity demonstrated by Erik takes a lot of work. With these agencies dictating when a launch can occur, and with this being the age of tech, there’s an app for that!

When planning a rocket shot such as this, Erik makes the best use of several apps and websites. To predict the location of the natural celestial bodies, such as the stars and moon, and work out the effect they’ll have on his photos; he uses PhotoPills. This app helps work out whether there are any notable constellations in the frame. It also shows whether the light from the moon will illuminate the landscape and the subject.

The next thing is to work out where the rocket flight path will be. Each rocket launch heads off in a specific direction based on its mission. This particular rocket headed into an orbit over our equator before heading off toward the sun. Erik framed the photograph entirely around this launch, and it was because of the planning afforded to him by Flight Club. This website gives a visualization of the trajectory based on location (including camera height) and focal length.

This series of images shows what Flight Club does, with a different shoot as an example.

The first step is to find the spot you intend to shoot from and grab the coordinates from Google Maps. 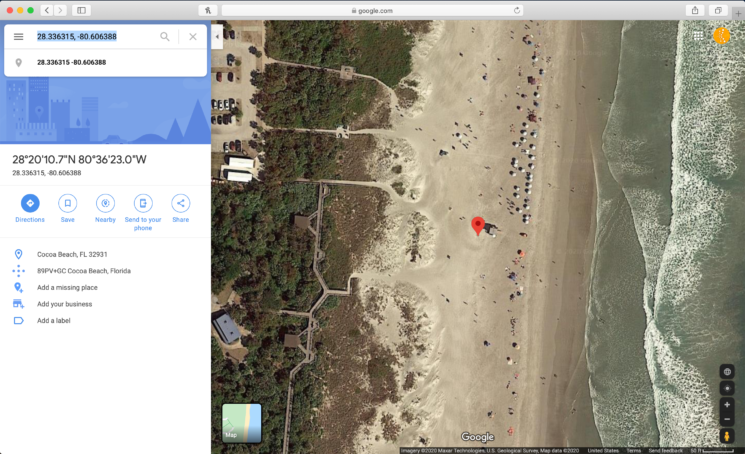 These coordinates are entered to flightclub.io, where they are calculated and cross-referenced to planned rocket trajectories. 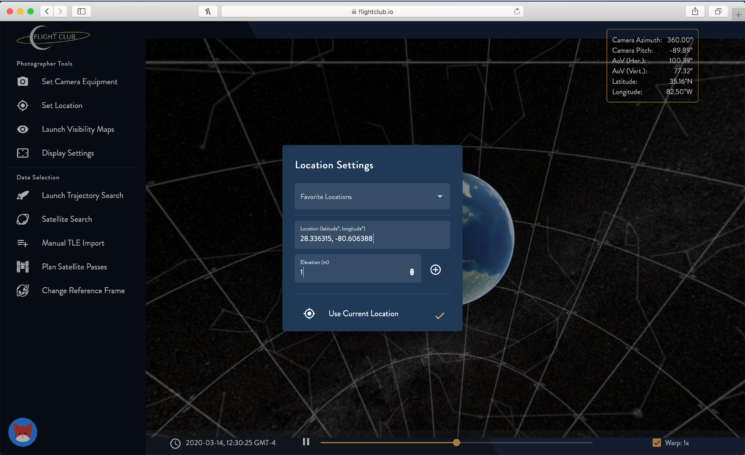 From this, we can then see a visualization of the rocket’s flight path, including the points at which the boosters detach and their return. 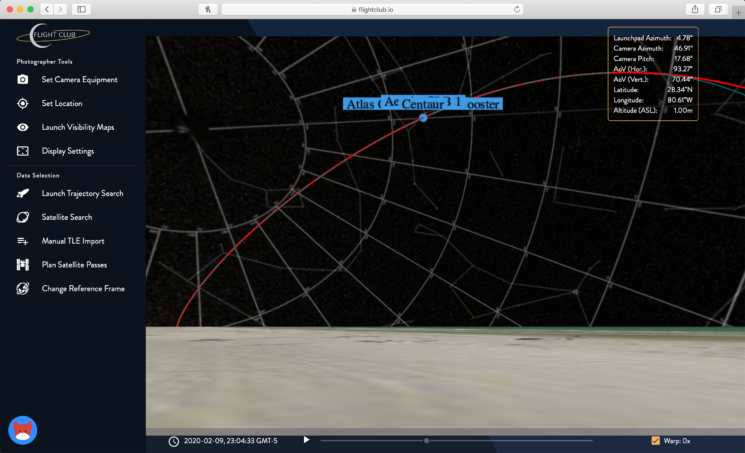 This visualization resulted in Erik being able to nail the shot. Without this, he could have missed a great foreground and background. 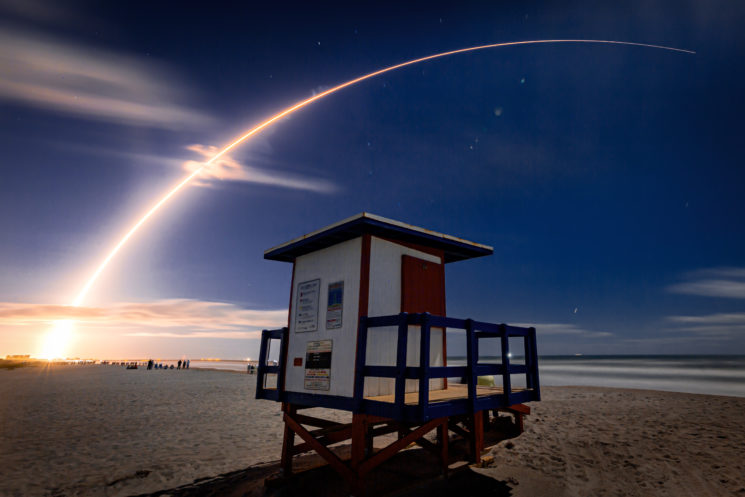 Just take a look at this overlay of the final shot and the visualization. What a great tool! Erik explains it in detail here. 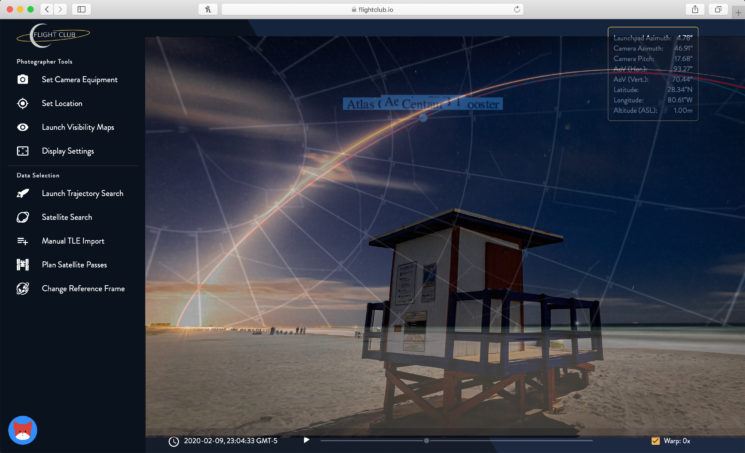 So, with all the technical planning in place, Erik had to explain away the $200 spacesuit to his wife. That’s right. Two hundred bucks. Taking the typical photographers’ angle in his argument, Erik justified the expense, explaining that a photograph should be an investment. Right he was, as this image has become one of his best-sellers. 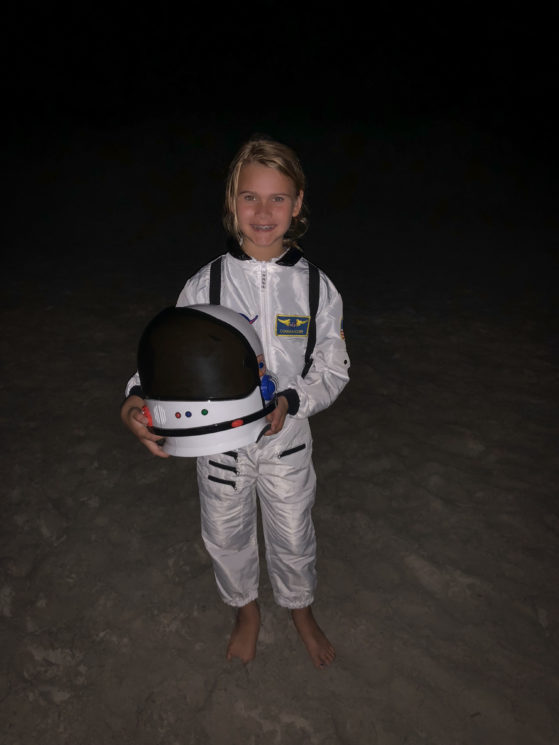 With the planning in place, the shot became reality. The location is the sand dunes of Jetty Park, near Port Canaveral. I know the area, having shot a lunch from here myself, and those dunes are super-helpful in blocking the artificial light from the horizon. A lot is going on near this spot, in terms of human civilization. Cape Canaveral itself is relatively sparse, but the foreground is populated. The lights from the port can be a hindrance. In this case, Erik effectively raised the horizon. This is something else Erik took into consideration when planning this shot. Erik waited a few seconds before opening the shutter, which gave the rocket enough time to clear the tower. This consideration prevented the considerable glow from the rocket firing up, which would’ve been far too bright, but still kept the trail at the horizon from this perspective.

The three shots are something we get to next. Erik took three separate exposures during the launch window, as I already mentioned. First up was the image of his daughter. The camera sat on a tripod, and the shot framed up so the three exposures could be blended. This setup remained in the same position for each of the three shots.

Here are the settings for each shot:

The astronaut shot is lit with a Canon Speedlight and small Westcott Rapid Box, like this: 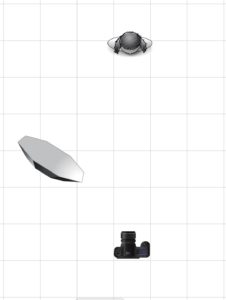 The light is 4-5 ft (1.5-2m) from the subject, and to keep the composition of the streak and to minimize distortion from the wide-angle lens, the camera is centered on the subject and about 2-3 ft (0.7-1m) from the ground.

The final image is a blend of the three shots with simple Photoshop techniques, like Blending Modes and Layer Masks. Kuna added Karl Sagan’s quote, “The Sky Calls To Us.” This quote is on the wall in the Kennedy Space Center, perfectly placed for photo opportunities. Erik transferred this quote out into the real world, depicting the future of space travel. Erik shoots lots of Elon Musk’s incredible Space X rockets, creating incredible images.

Erik Kuna has a website and Instagram where you can check out more of his awesome shots. All images in this post are Copyright Erik Kuna, and shared with permission

This is what a rocket launch looks like from space