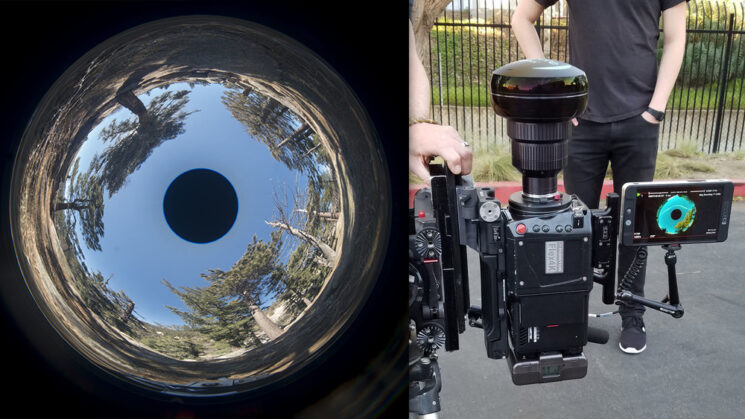 Ok, this is pretty impressive and also extremely cool. Industrial and interaction designers, Rob Englert and Meyer Giordano have created a very unique lens for, in this case, Nikon F mount that lets you get a full 360° field of view and 180° vertically in a single shot with no stitching required.

The pair founded Sphere Optics (aka “(sphere)”). Their first lens is called the (sphere) Pro1, which they describe as “the world’s first and only single-lens 360° full-spherical capture solution”. It has a focal length of 1mm with a fixed f/8 aperture and it sure does look pretty crazy on the camera. Its design, though, is a thing of beauty and has a level of obviousness that it’s amazing nobody ever did it before.

At its simplest breakdown, the lens essentially takes a cross-section of a typical fisheye lens, but then revolves it around a central axis. The image it captures is then reflected down onto the sensor via a mirror allowing you to see a complete view of the surroundings on a single flat image in a photograph. Or, a video, making those 8K cameras like the Canon EOS R5 and Sony A1 look pretty attractive right about now. 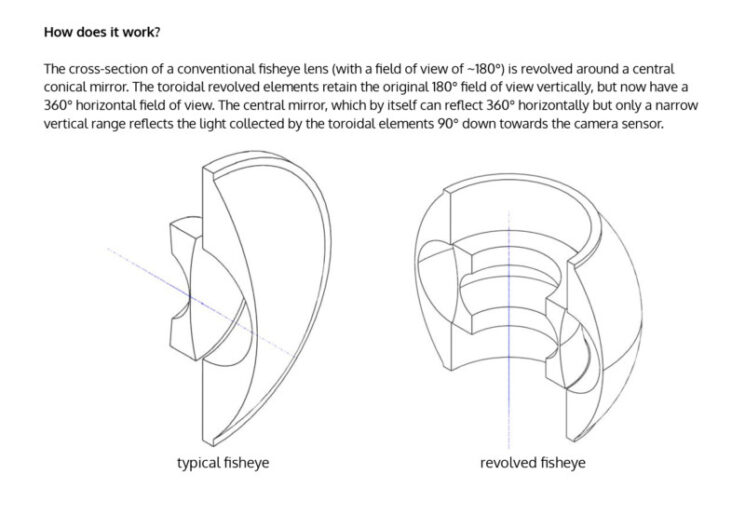 When you see it, the concept is genius in its simplicity and obviousness – especially when nobody’s ever actually tried it before. And looking at the demos on (sphere)’s YouTube channel, it certainly seems to create some pretty impressive results! Of course, the creation is far more complex than the concept.

Inside the lens, there are 12 elements in total. One is reflective (the mirror that directs the image down towards the sensor) and eleven refractive. And the elements themselves are as unique as the entire lens is. Of course, they’d have to be, because there isn’t anything like this on the market. 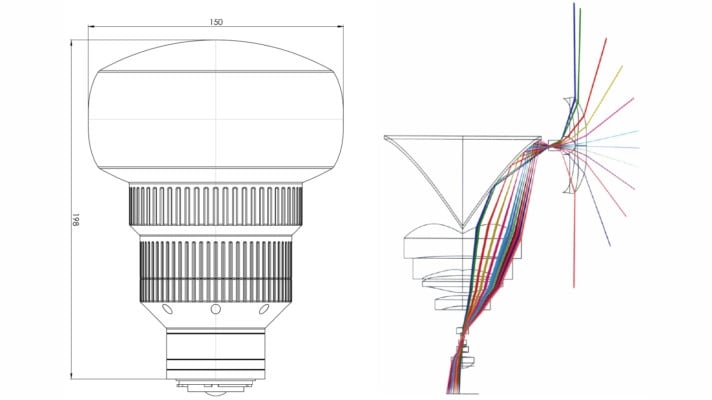 There aren’t going to be a huge amount of these lenses available. At least, certainly not any time soon. At the moment, each lens is fabricated one unit at a time and assembled by hand. This makes them likely very expensive and even if you’re willing to splash the cash, it may take a while for it to actually go from a bunch of materials lying on a bench into a fully working lens.

I haven’t seen a price mentioned anywhere yet, but you know what they say… If you have to ask, you probably can’t afford it.

Naturally, the lens is designed for use with VR and AR, and the team went with a Nikon F mount not because they expect it to be used on Nikon cameras, but because it’s the mount that’s most easily adaptable to anything else. You can easily adapt it to Canon EF, Sony E or just about anything. And you don’t need to worry about autofocus and aperture control, because there isn’t any.

Personally, as sexy as this thing looks and as great as the demo footage appears, I think I’ll stick with the Insta360 ONE X2. It fits in my pocket and does fine for what I need. But if you’re interested in finding out more about the (sphere) Pro1, head on over to the (sphere) website.