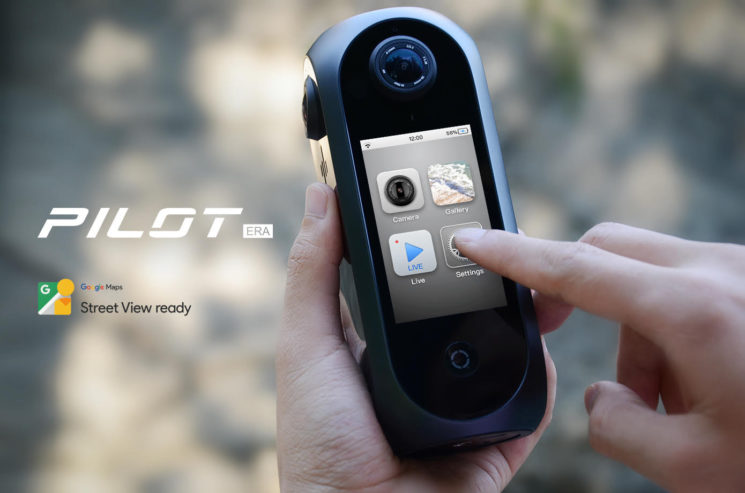 We first mentioned the Pilot Era last month after we spotted it at NAB 2019 in Las Vegas. It’s a 360° camera with some serious muscle. It shoots 8K footage through four f/2.2 aspherical fisheye lenses onto four 12-megapixel Sony CMOS sensors. It’s Android-powered, has in-camera stitching all the way up to 8K and half a terabyte of built-in storage.

Now, their Indiegogo campaign has gone live, with prices starting at $1,999 (the $1,799 super early birds are already all gone). Unlike many IGG campaigns, though, the first production run has already happened and they will be shipping next month.

The basic specs for Pilot Era are very impressive.

It also comes with a dock that adds ethernet capabilities for more reliable live streams, as well as a SIM card slot for when you want to live stream from places where there’s no WiFi or wired ethernet. The built-in WiFi can act as either a client, logging onto a host network, or as a host, allowing you to connect your mobile device directly to the camera in order to monitor and remotely control the camera.

It shoots 8K video at up to 24 frames per second, although not with realtime stitching. It does offer in-camera stitching of 8K 24fps footage, but you run it as a separate process after the fact. However, the stitching process in-camera is aided by a high-performance AI processor allowing it to stitch those files much more quickly than on a computer. It does feature realtime stitching for 4K 30fps, though, which is ideal for live streaming to the likes of YouTube and Facebook.

It’s a little bit larger than many twin-camera pocket-sized consumer 360° cameras you might have seen, but it’s a different class of camera. It’s aimed more at filmmakers than consumers. People who want to create 360° content for a wider audience, greater editing freedom, and increased production value, as well as 3D & VFX artists who want to create higher resolution environment maps for CG renders & composites.

But it’s also aimed at Google Streetview content photographers, too. It features a built in, very precise GPS with one-click upload to the Google Maps servers. It has ethernet, 4G and dual-band WiFi offering plenty of connectivity options and the ability to live stream decent quality 4K 360° content without a computer – or even your phone. You can see what you’re shooting right there on the camera’s LCD.

It has plenty of storage, too. 512GB UFS high-speed storage that can hold 6.5 hours of 8K video or a whopping 26,000 panoramic photos. It also has a removable 7,200mAh battery which offers up to 3.5 hours of use on a full charge when shooting 8K video.

As mentioned, the first production run of the cameras has already happened, so the IGG campaign is a little less of a gamble than they often are with a new camera. It’s more of a retail outlet than a funding goal, and they’ve already surpassed their target. That being said, it’s still on IGG, so you still have to accept it like you would any other IGG campaign.

I’ve actually been shooting with the Pilot Era myself for a couple of weeks now, though, and I’ll have a full review coming to DIYP soon, so keep an eye out for that. It has one or two little niggles in the software that need to be ironed out, but overall, it’s been an impressive camera so far and the footage looks pretty good.

For now, though, if you want to find out more, or get your own, head on over to the Indiegogo campaign. The Pilot Era is currently $1,999 for early birds ($600 off the regular retail price once it goes on general sale) with shipping expected in June. Once those are all claimed, the price is $2,199, which is still a 15% discount off the full retail.

« The ultimate, long-term review of Nikon 300mm f/2.8 VR
How to shoot smooth timelapse of fast moving subjects during the day »