There seem to be a lot of very fast lens options these days, even for full-frame cameras. Very few are them are coming from the long-established big-name companies like the camera manufacturers themselves or even Sigma and Tamron, but there are a lot of manual focus ones coming from some of the newer Chinese lens manufacturers.

In this video, Christopher Frost puts four full-frame 50mm f/0.95 lenses to the test to see how they stack up against each other, including the Mitakon, TTArtisan, Brightin Star and the recently announced Laowa Argus lens. The Laowa is a hair wider than the other three at 45mm rather than 50, but it’s close enough.

The Mitakon 50mm f/0.95 III and Laowa Argus 45mm f/0.95 both cost around $800 and are available for Sony E, Canon RF and Nikon Z mounts. The TTArtisan 50mm f/0.95 is a little less expensive at around $755 and is only available in Leica M mount, although that can be pretty easily adapted to just about any mirrorless mount. The cheapest of the bunch by far is the Brightin Star 50mm f/0.95 costing around half the price of the others at only $390 and is available in a variety of mounts including Sony E, Canon RF, Nikon Z, Fuji X and Leica L. 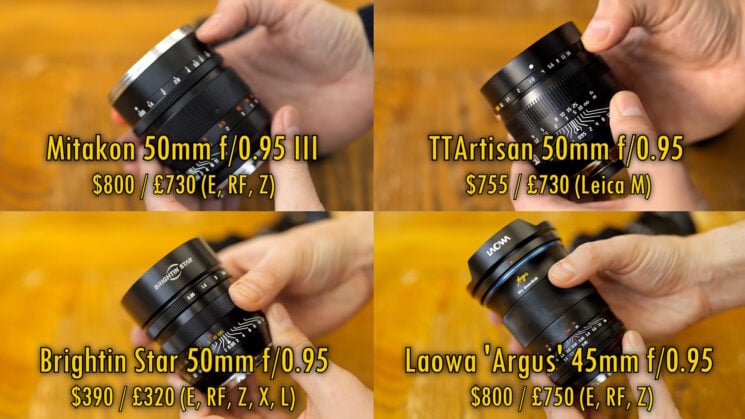 Despite the price discrepancy between the most and least expensive of the lenses, Christopher says the build quality of all four lenses is pretty similar, with all of them having a solid metal construction. But there are workflow differences between them. The Mitakon, for example, offers an almost 360° throw on the focus ring for super fine control – almost essential for lenses this bright – and comes with a deeper lens hood to minimise the flaring that typically happens with lenses that have this wide an aperture.

Other lenses, such as the Laowa offer both clicky and stepless apertures, making it potentially better suited to video use, although none of these lenses is perfect. What might put video shooters off with all of them is that they all seem to exhibit some pretty significant focus breathing. Likewise, none of them is weather-sealed, which is an important factor for those shooting in more extreme conditions.

When it comes to actually shooting them, though, the sharpness tests are very telling with the Laowa offering the best overall sharpness and contrast throughout the entire frame. The other three all tend to blur a little, even in the centre but especially as you get out towards the edges of the frame. But with a lens of this type, that edge softness might be something you desire for that “lomo” retro look – especially with that flare!

If I had to force myself to pick one of these and cost wasn’t a factor, I think the Argus looks best overall in Christopher’s tests, but I don’t think I’d choose to buy any of them, really. Not just yet, anyway. All of them have issues and compromises that mean they fall behind the other three in some respect or other.

I think a lens with the optical quality of the Laowa and the massive focus throw range of the Mitakon would be the ideal for me. How about you?