Shooting with a speedlight on camera is not something most of us would choose for portraits. But sometimes there’s no other choice, whether you don’t have the equipment to shoot off-camera or you don’t have enough room. So, Gavin Hoey comes to the rescue. In this video from Adorama, he’ll show you a few solutions for getting flattering light with your speedlight attached to your camera.

Gavin guides you through a few options you can try out, and you can see what each of them does and how it affects the image. He gives you examples for each approach and explains why you should (or shouldn’t) use it.

Direct on-camera flash: for me personally, this is something to avoid and I’m not a fan of photos taken with a direct flash. It creates flat, unflattering, hard light, with a harsh shadow behind the model. Of course, it can be an artistic choice (Ren Hang is the first to pop to my mind). But if you’re looking for soft, flattering light, this won’t be your go-to setup.

Flash shooting straight up: if you’re looking to soften up the light, it’s always a good idea to have it bounce off a white surface. When you turn the flash upwards, the light bounces off the ceiling which makes it much softer and creates virtually no shadow behind the model. However, the light on the model’s face is still not very flattering and there are no catchlights, which makes the image dull. You can add a bounce card to add the catchlights, although it won’t do much for lighting the model’s face.

Bouncing the flash off the wall: this is another option for softening the light, but it’s easy to get it wrong. Your first impulse could be to bounce the flash at around a 45-degree angle. However, this creates a weird, long shadow behind the model and even on her face. This is because a part of light comes from the wall, but there’s still a part of direct flash that lightens the model.

To avoid this, make sure to angle the shadow just enough that the light bounces off the wall but none of the light hits the model directly. The shadow will be there, but it will be much softer, and the light on the face will be nice and flattering. 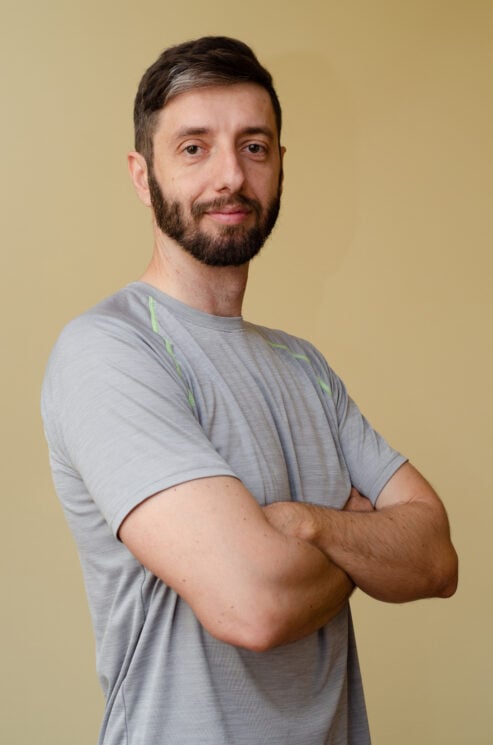 Finally, you can bounce the flash on off the wall behind you. In fact, this give the most flattering light in Gavin’s studio. Turn your flash all the way backwards and you’ll get a wonderful, soft, flattering light, with almost no shadows behind the model whatsoever. Note that you may need to crank up the flash power or increase your ISO to get the proper exposure.

At the end of the video, Gavin tries out a direct flash in a small space. And I mean, really small. He wraps the model in a black carpet and shoots with flash, getting quite interesting results. of course, it’s probably not how most of us will shoot portraits, but you can get some cool results for personal projects.

I use my speedlight pretty rarely considering that I also rarely shoot portraits. But when I do, I either take it off camera and improvise a modifier (like here), or I bounce it off the wall (like in the photo above). I never tried bouncing it off the wall behind me though, and that’s definitely something I’ll add to my bag of tricks.

How to shoot off camera flash portraits on a budget

How do you hold your camera? These are the best and the worst ways to do it

How to shoot great portraits with flash in a tiny space

« The largest digital camera ever built is being installed and its resolution is 3.2 BILLION pixels
Follow these ten tips to instantly improve your wildlife photography »