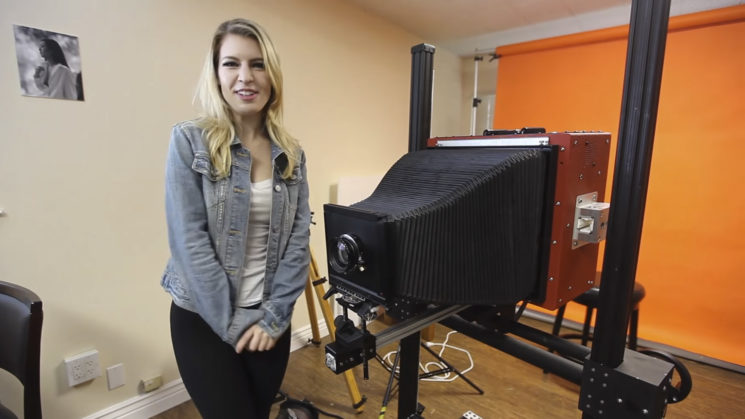 Large format digital cameras aren’t an entirely new idea. They’ve been around for a little while now, and a number of people have built their own. But they’ve had one big drawback. Because it’s difficult and expensive to make sensors so large, they typically use scanning backs. In the case of DIY options, it’s often the internals of a flatbed scanner.

Now, though, an 8×10 large format camera which uses a 9×11 inch monochrome CMOS sensor to record a single shot all at once is available to buy. Created by Bill Charbonnet, who left his “real job” in 2014 to start LargeSense LLC, the LargeSense LS911 can be yours for only $106,000. Oh, and yes, it shoots 4K video, too.

The LS911 has a base sensitivity of ISO2100, which seems quite high. But this is 8×10 large format. A 300mm lens on a camera like this translates to around 45mm field of view equivalent on a “full frame” 35mm DSLR. At that sort of focal length, you need to stop down a lot to get a similar depth of field at the same focus distance. So, you need a lot of light or increased sensitivity. ISO2100 is around four and a third stops higher than the base ISO100 you might find on your DSLR. And like some other recent cameras, such as the Panasonic GH5S, it has dual native ISO, also offering ISO6400.

The sensor contained within the LS911 sounds quite small at only 12 megapixels. But at 9×11 inches in size, that means each pixel on the sensor is a whopping 75 microns. It has no Bayer or other type of colour filter array, so it records in monochrome. There is a piece of glass bonded to the sensor, though, and there are two options that you can make when ordering. The first allows it to see the beyond the full spectrum of visible light, going into the ultraviolet and infrared rangers. This requires filters on your lens to block the unwanted parts depending on the shot you’re going for. The other blocks UV and IR to only allow visible light to pass through to the sensor. 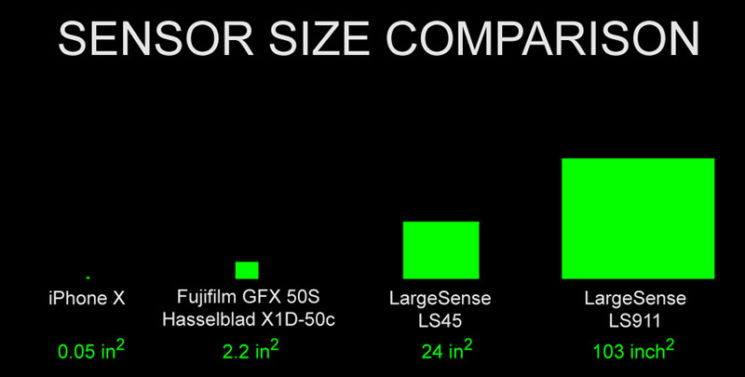 To save your photos, the LS911 utilises an SD card slot, but it also has 900GB of internal storage, and allows you to connect external USB3.1 hard drives or SSDs. It’s unclear if this is a UHS-II card slot, but with 12MP images, even shooting 16Bit RAW, it’s not that demanding. For 4K video, though, it might be. It doesn’t mention the bitrates required, but it will shoot CinemaDNG raw video. I would imagine it would store this to the internal drive rather than straight to SD.

There are a few video samples on YouTube from an early prototype showing the video capabilities of the camera. The first is a 4K UHD recording, with externally recorded audio. The second is a 1080p video recorded at 70 frames per second and then slowed down.

Despite being a monochrome camera, it does offer a triple-shot mode for capturing full colour. You will need colour filters for this one, and you’re not going to be using it for any moving subjects. But, essentially, you take three photos using red, green and blue lens filters, and it combines them together to form the final shot. Ideal if you’re doing something like still lifes or architecture.

Overall, it’s a pretty insane looking camera. I personally wouldn’t have any practical use for something like this, but I can see many companies and photographers that would. Despite only being 12 megapixel, it will produce fantastic images that would suit many online and smaller print requirements. And while it may be a bit excessive for shooting video, boy does it look good.

Or, you could just use it to make really expensive selfies. 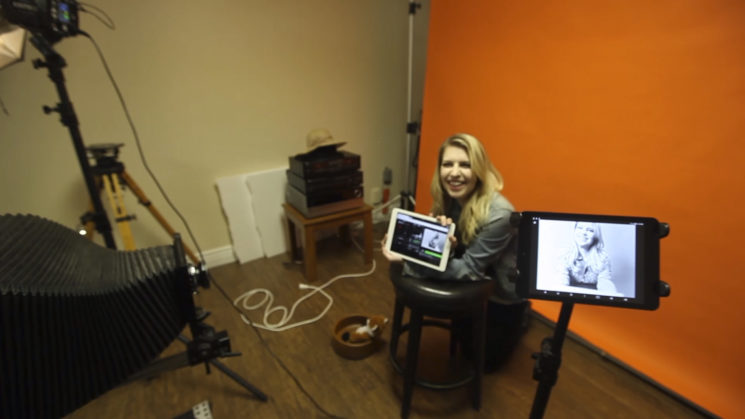 Find out more about the LS911 over on the LargeSense website, where size most definitely matters. You can also see the full specs and a little more technical info, here.

« This impossible long take was shot with a tiny drone in a Japanese high school
First look at the Pentax K1 Mark II and DFA 50mm f/1.4 lens »