The Pentax K1 was already an impressive camera. It’s cherished by everybody who owns one. It contains features unique amongst DSLRs, such as its Pixel Shift Resolution feature. It’s seen an update, now, though, with Ricoh recently announcing the Pentax K1 Mark II, offering a couple of pretty significant upgrades. We went along to the Ricoh Pentax stand during The Photography Show to go check it out.

For the most part, the K1 Mark II is near identical to the original Pentax K1. It features a full frame sensor with the same 36.4MP CMOS sensor, 33 point autofocus system, 5-axis in-body image stabilisation, and same “cross-tilt” articulating LCD.

What makes it stand out from its predecessor, thoug, is the new “accelerator unit”. This sits between the sensor and the PRIME IV image processing chip. Ricoh say that this new unit increases the signal to noise ratio allowing for better high ISO performance. What this means is a 2 stop increase in ISO range, now going from 100 all the way up to 819,200.

The other big feature of the K1 Mark II is the new Dynamic Pixel Shift mode. This was one of the big caveats of Pixel Shift on the K1. It was wonderful, it allowed you to simulate something like a Foveon with the Bayer filter CMOS sensor. It essentially took several images with the sensor shifted in slightly different positions to allow each pixel to see the full range of red, green and blue, rather than simply interpolating with a standard Bayer CMOS sensor. But, it was only usable on a tripod, so that the camera didn’t move at all between shots.

Now, the new Dynamic Pixel Shift mode allows you to use this feature handheld. But, it’s still taking several shots over the source of a set amount of time. So, I’m still curious to really test its limits with moving subjects. It may still only remain in the domain of static subjects, even if you can handhold the camera now.

Pentax were also showing off their new DFA 50mm f/1.4 Lens at the show, too. This lens has been hotly anticipated for a while now by Pentax shooters. It’s seen some revisions and changes since it was first spoken of, but Pentax tell us that it’s getting close to a release now. But, exactly when it will release is unclear. In the video, they suggest April or May, but we’re halfway through April already and pre-orders haven’t opened up yet. 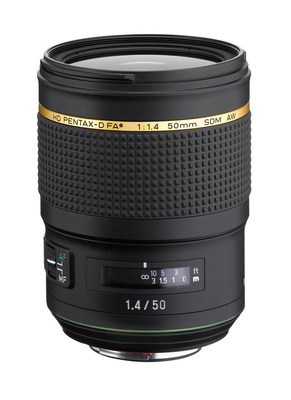 Along with the final release date, the price is still to be confirmed, but at the moment, they’re looking at somewhere around $1,199. Seeing it in person, I was quite taken back by how large this lens is compared to something like my Nikon 50mm f/1.4D AF. It’s significantly larger and heavier. So, I’d be keen to see how it compares to some of the other (smaller and less expensive) 50mm f/1.4 lenses out there once it becomes available.

We’re almost done with videos from The Photography Show now, but in case you missed them, here are some of the other cool things we saw there.

« The world’s first single shot 8×10 large format digital camera can be yours for a mere $106,000
2018 Pulitzer Prize winner for photography leaves his job and now works for a brewery »