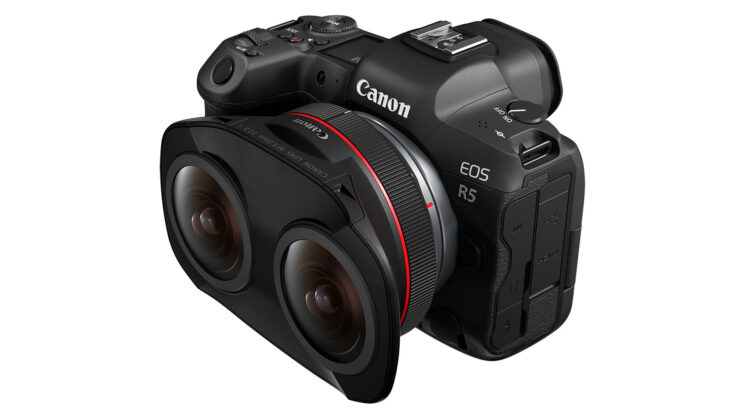 The lens does, naturally, look quite odd. It contains two lenses, each one being a 5.2mm f/2.8L lens that contains, apparently, 10 elements in 12 groups (not sure how that works). The lenses both have a 190° field of view in both the X and Y axes and being slightly apart from each other (similar to the distance between human eyes) allows us to capture a stereoscopic view of the world in front of us that we then have some freedom to look around in post.

The wide f/2.8 aperture stops down to a minimum of f/16, thanks to 7 aperture blades. The closest focus distance is a mere 20cm away, although I expect it’ll hit infinity not too far away from that minimum focus distance and the whole world will be in focus. There’s no control ring, no stabilisation, and using filters is going to be difficult, although there is a rear 35x20mm gel filter slot if you really want to add some ND. You’re not going to get a standard polariser on this lens, though. 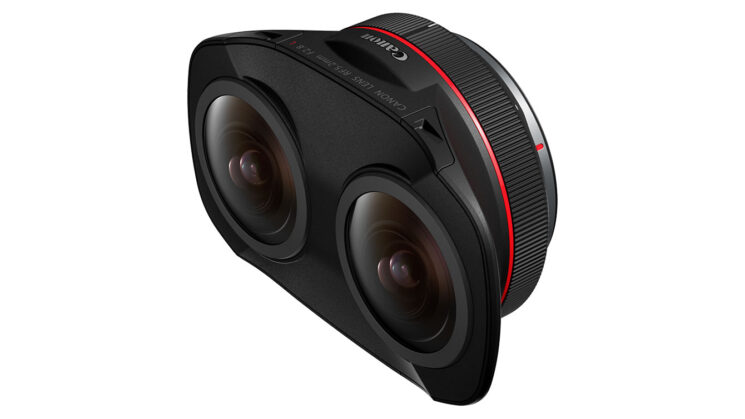 Canon says that it’s designed specifically for the Canon EOS R5 as part of the “EOS VR” system, and a future firmware update for the EOS R5 is on the way to support the use of this lens for VR shooting. They’re also releasing new Canon EOS VR software (presumably for the desktop and not a smartphone app) for converting and processing the VR footage.

Of course, to fully enjoy the full stereoscopic 180° VR experience, you’re going to need a VR headset – Canon recommends the Oculus Quest 2, but I expect many phones in Google Cardboard would work just as well, as they do with so much other 3D 180° VR footage. The bad news, though, is that Canon says these will be available on a paid subscription model – which isn’t going to sit well with people who’ve just forked over six grand for this lens and an EOS R5. The other bad news is that there’s no mention of DaVinci Resolve. So, it looks like you’re stuck with Adobe’s ecosystem.

The Canon RF 5.2mm f/2.8L Dual Fisheye lens is available to pre-order now for $1,999 and is scheduled to start shipping in late December. The Canon EOS VR software as well as an EOS VR plugin for Premiere Pro are also expected to be released in December.

« This Kodak Memory grey scale printer fits in the palm of your hand
Lighting setup: How to use colour gels outdoors »