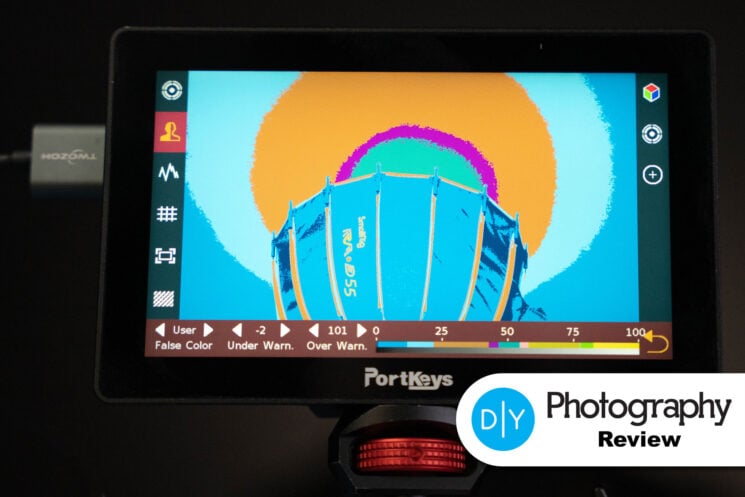 If you are shooting video, you know how annoying those built-in camera monitors can be. Even if they are slightly bigger. Even if they tilt. Even if they flip out. They are just not very convenient when you need to do work on a bigger scale. I am not dissing them completely. Some situations call for small built-in monitors. But you want an external monitor when you need accuracy and a bit more real estate. Today, we will look at PortKeys LH5P II, which is not only an on-camera monitor but also a clever camera remote. 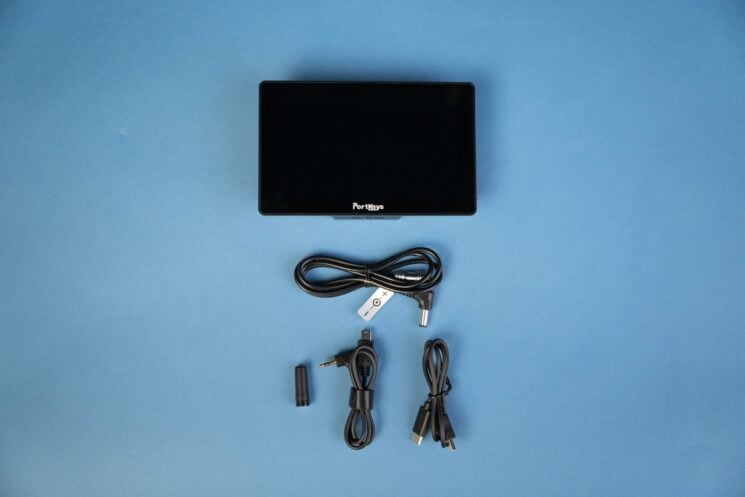 In the box, you get everything you expect to get with a 5.5″ monitor: 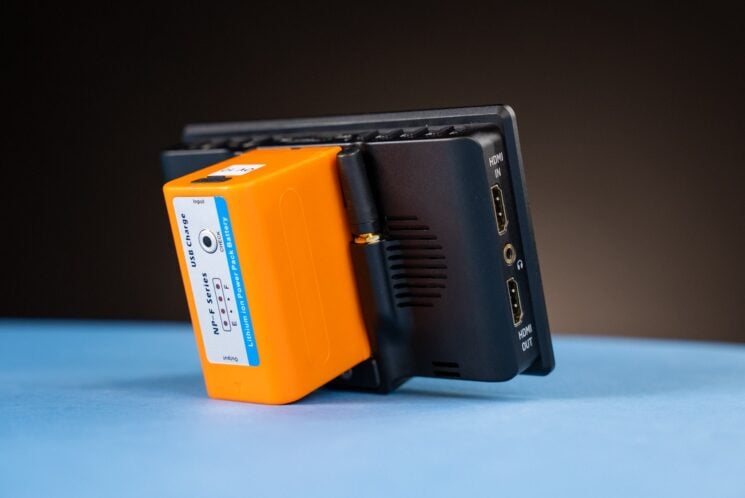 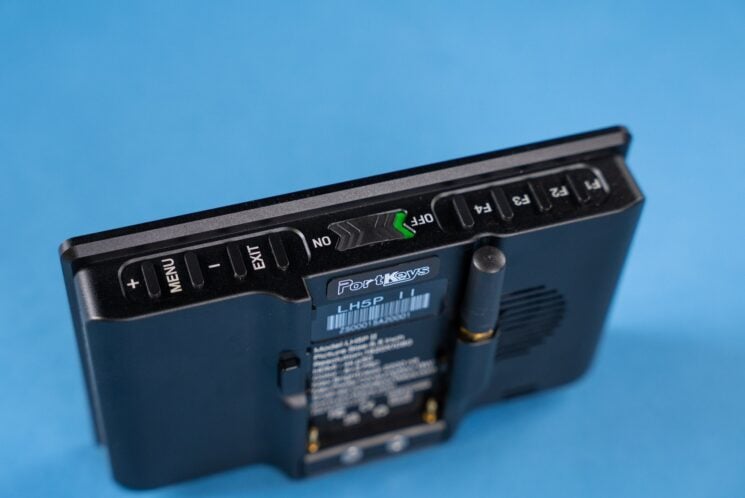 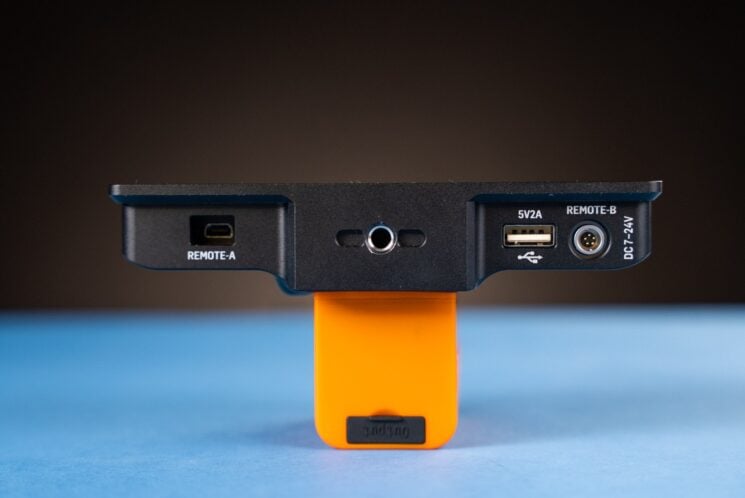 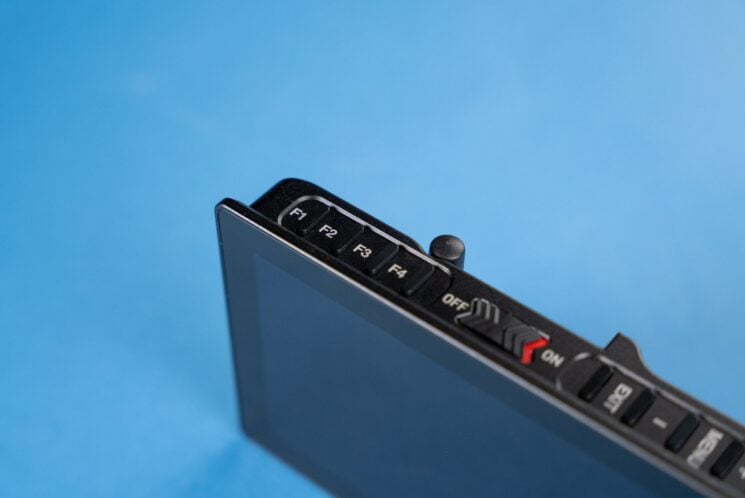 When you open the box, you don’t actually see the monitor. You see a case. The generic, plastic-y, egg-create foam case. Over the years, we tested some monitors that came with cases, and we welcome the peli-like case. The ones with custom foam inserts and nice locks. The LH5P II case, however, is a generic case that offers very little protection and no compartmentalization. 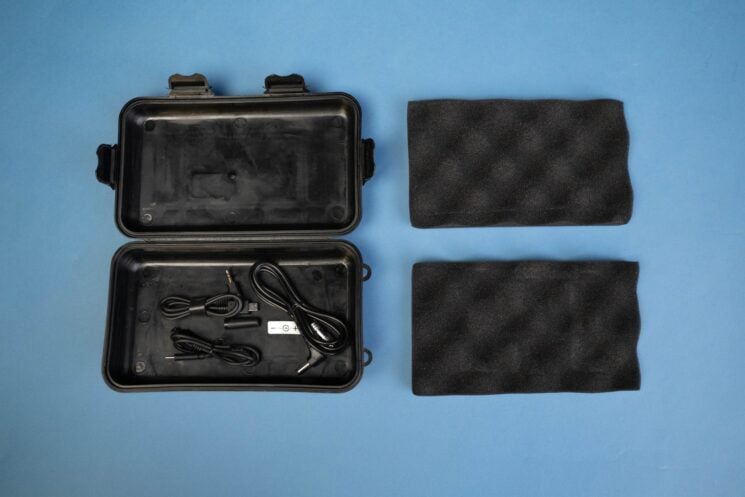 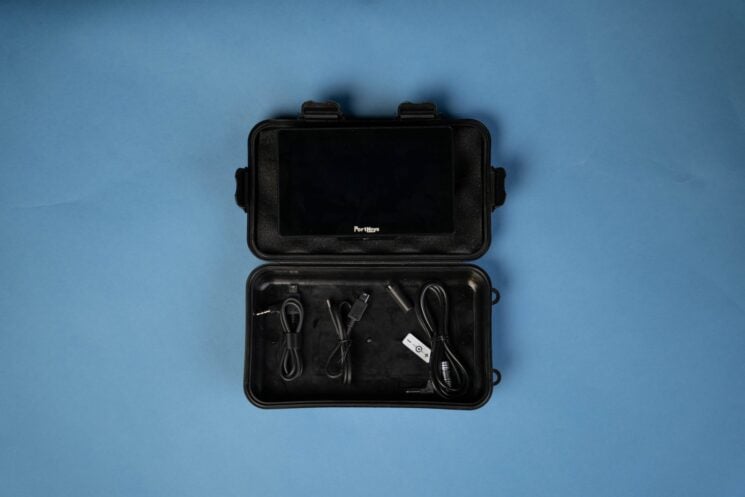 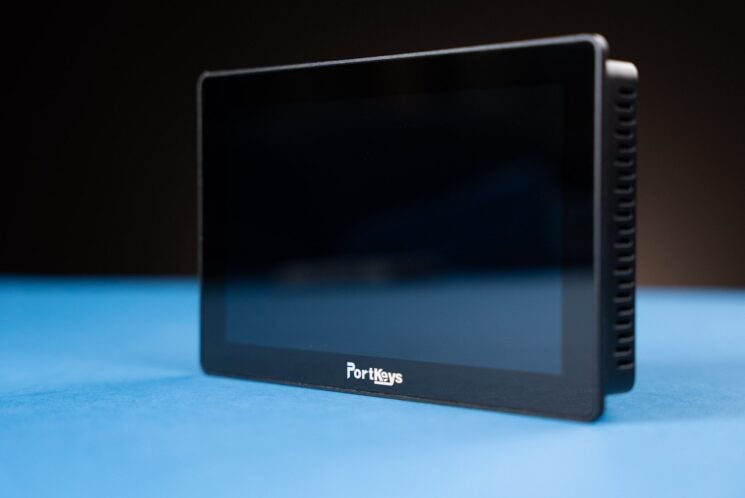 You’ll find the cables you need to run the monitor under the sponges.  There is no HDMI cable included, so get your favorite. (I recommend this tiny super flexible cable).

The monitor, on the other hand, feels quite solid. It is made from machined aluminum and looks like it can take some beating.

If you look at the ports and buttons, the placement is very convenient. All the buttons are incredibly tangible and easy to access. And the on-off switch is a nice button located in the middle of the top frame. The HDMI ports are located on the left side and are very accessible. Generally, I would say you can fully operate this monitor with gloves.

My only caveat is that there is only one mounting point on the bottom. Maybe it makes sense, though, as all the buttons are on the top. The mountain thread is a nice solid insert with somewhat weird-looking locking pins.

There is a fan on the unit, so it is not just passive cooling. In our usage, the fan was usually kept on its “low” setting, which is not that noisy at all, and did not interfere with the audio. If you need one of the high fan levels, You will definitely notice the fan noise. The fan also starts on “high” and then sets down, so be aware that when you activate the fan, you will get a few seconds of high noise.

The only gripe I have with the construction is the hard-to-access and assemble antenna connector.

The monitor boasts specs of 2200 cd/m². We did not measure that with any calibration tools, but we did use the LH5PII in the sun a few times. To our naked eyes, the LH5P II held its own in the bright sunlight.

We have a similar notion of color accuracy. The colors were pretty spot on without using any pro measurements tools. Anda just like most modern monitors, you can add your own LUTs for better on-site color control.

There are two ways to control the monitor: with the top buttons and by using gestures like swipe, pinch, and tap.

You can control and tweak all the standard functions with gestures: zebra, peaking, luma waveform, RGB parade, and really, anything you would expect from a monitor in 2022. I love the gesture control and how easy it is to navigate between the different windows and control. PortKeys also lets you set a strip on the right with your favorite controls. Kind of a quick menu. 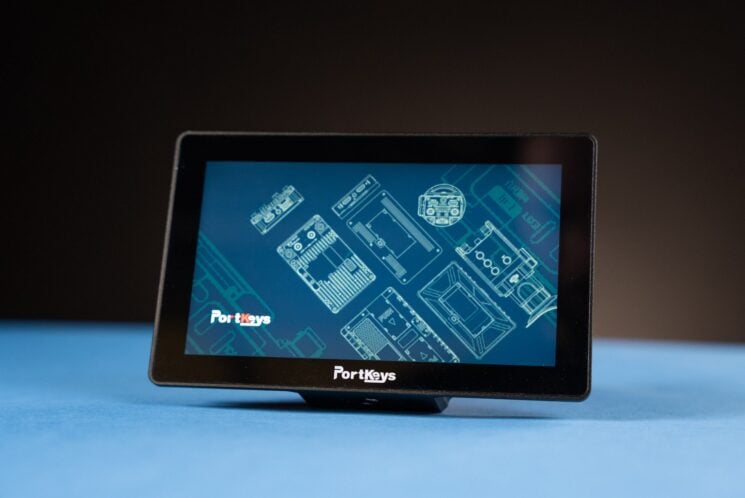 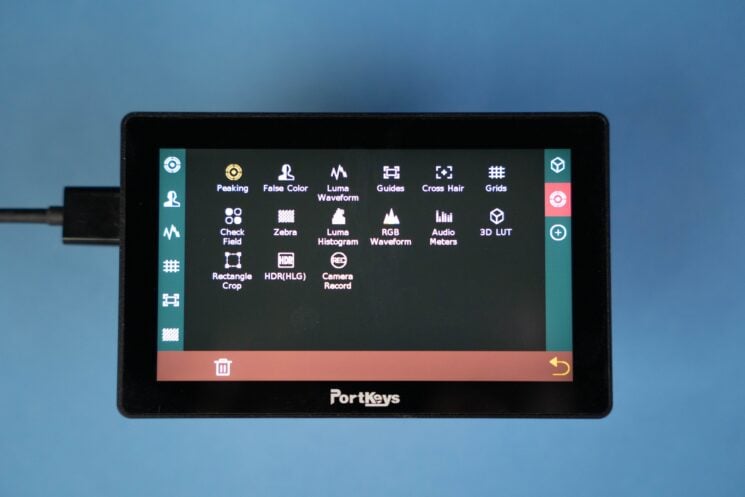 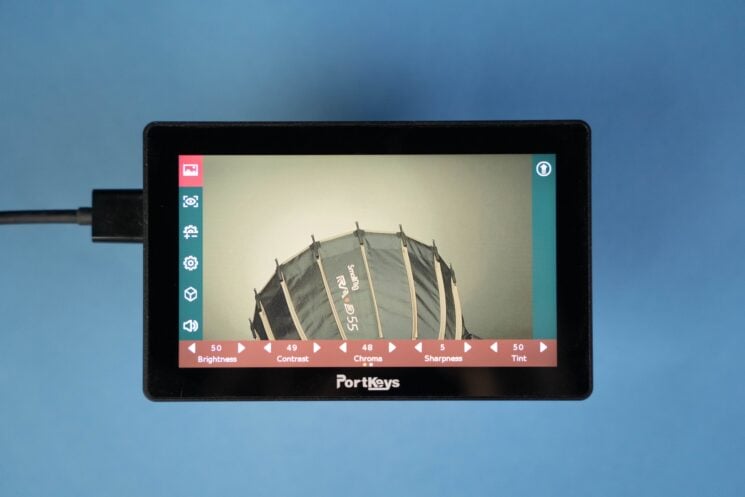 Sadly, the screen is not as responsive as your phone. It takes a second or two to react, and some function changes create a short black screen that I found to be a bit distracting.

The buttons on the top are easy to use and follow the same in-out-left-right logic as many 4-button devices.

Maybe the most noteworthy feature of the PortKeys LH5P II monitor is its ability to control your camera. You access the camera control feature by swiping up from the bottom of the monitor. 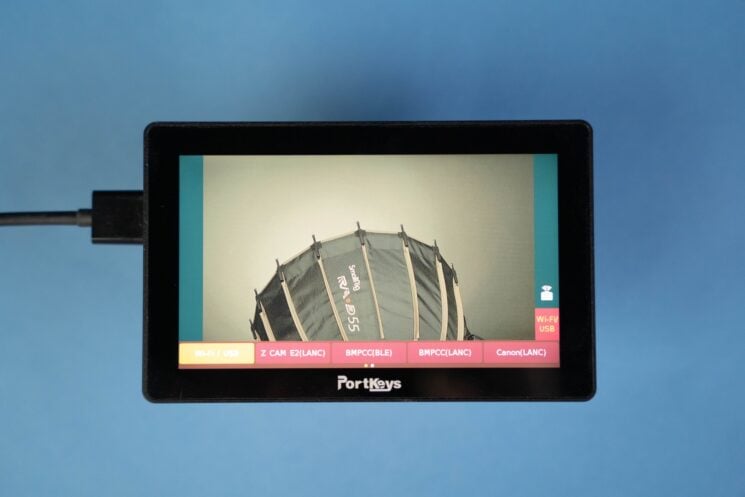 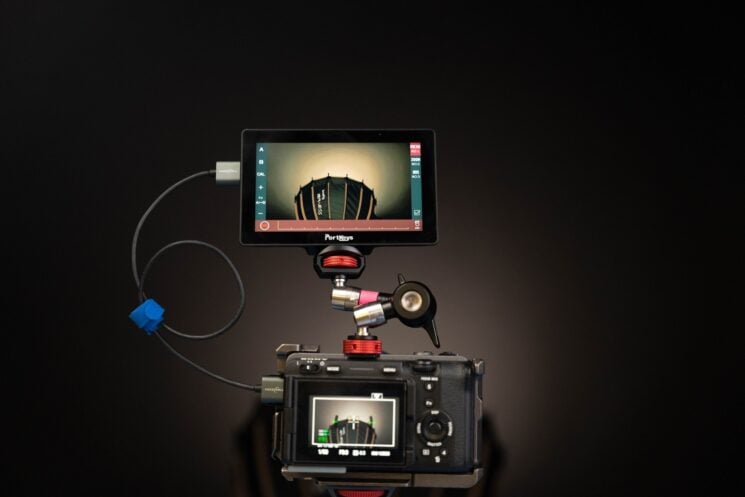 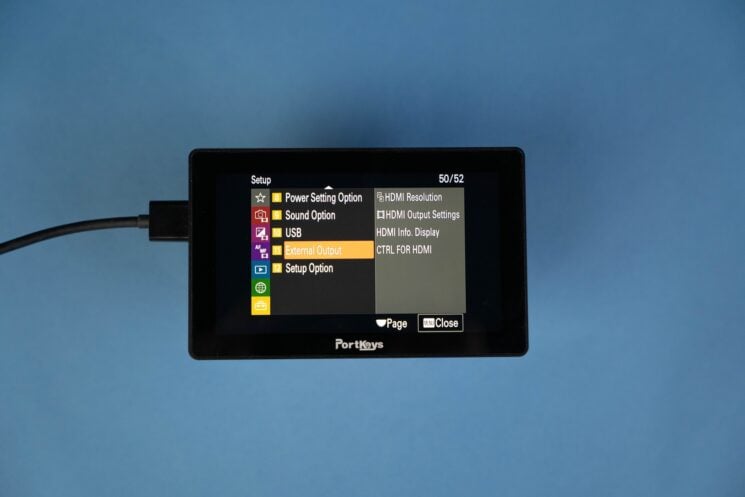 feeding from the camera menu

There, you can select from a range of cameras: Sony, BMPCC, Z-Cam Canon, and Panasonic. I wonder where Nikon is. In this mode, the PortKeys LH5P II displays a full range of camera controls via the touch screen. You get your standard start/stop, ISO/Shutter/WB. But also touch to focus and touch to track.

As with the other touch-driven operations, there is a bit of a lag between touching the screen and seeing the Sony registering the action.

Sadly, at least with the Sony FX3, the wireless operation is restricted to controlling the camera. You still need to connect an HDMI cable for the actual image feed. I hope PortKeys goes the way of Sony Imaging Edge and provides full camera control/streaming over Wifi. (If anything, DJI showed us it could be done quite well)

If you are unsure if your camera is supported, there is an excellent chart that PortKeys provides with which functionality goes with which camera.

A Clever DIY Alarm For your Camera Bag