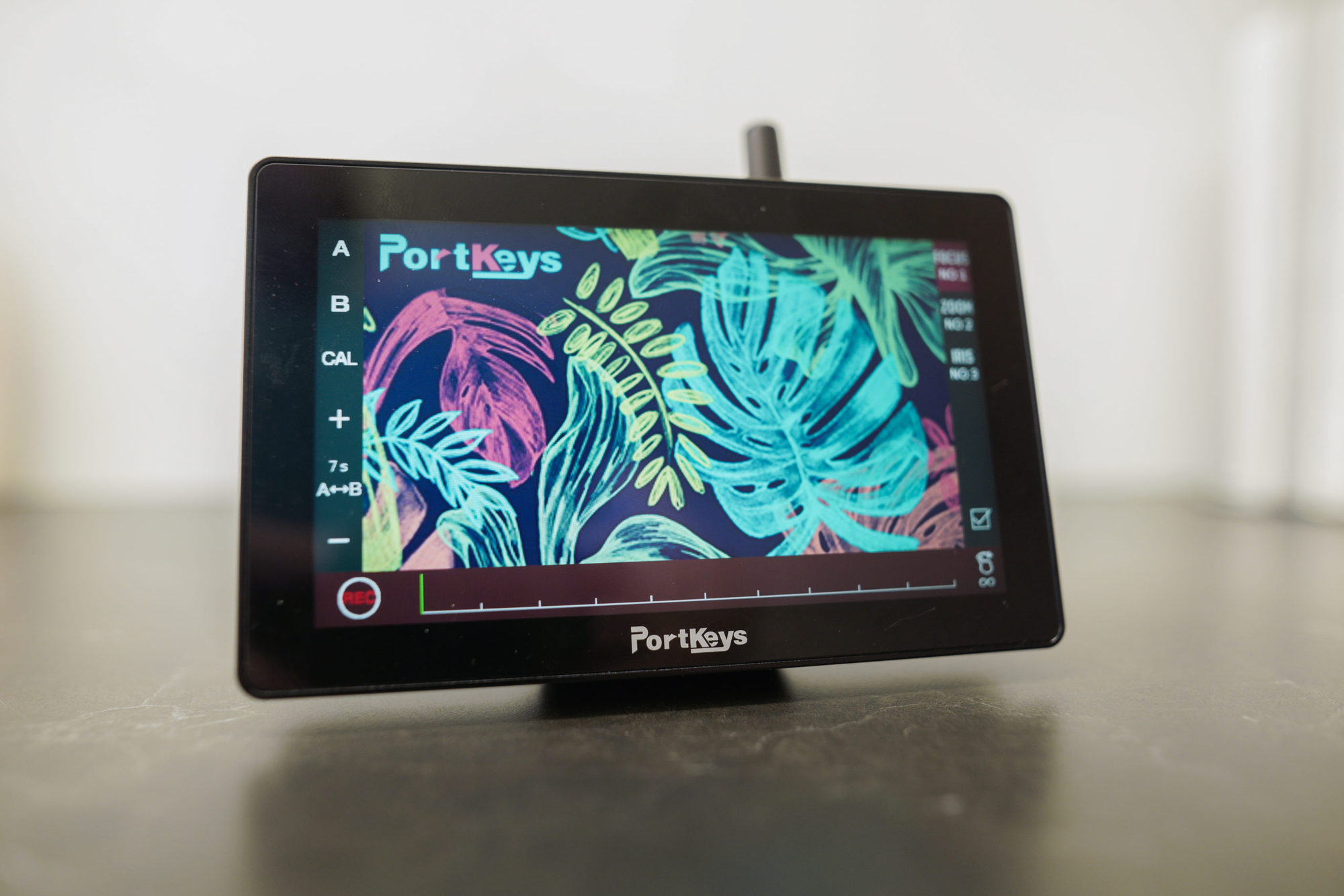 The Portkeys LH5P is a really interesting monitor, to say the least. It boasts a great feature set and a bright panel. But the most attractive feature is definitely the camera control function. Portkeys has been getting notoriety for its camera control abilities, and this monitor brings it to an even more affordable market. Peaking at  1700 nits, this 5.5-inch monitor can do some pretty cool stuff.

Even taking into consideration that Portkeys is a budget brand. This monitor stands out with its feature set.

The Monitor arrives in a hard-shell case. I wouldn’t call it a pelican, but it’s nice that you have a case to protect your monitor during transport without a huge footprint. It’s worth noting that the case it comes with fits only the monitor, nothing else. Although, I did manage to sneak a single antenna towards the back of the case. 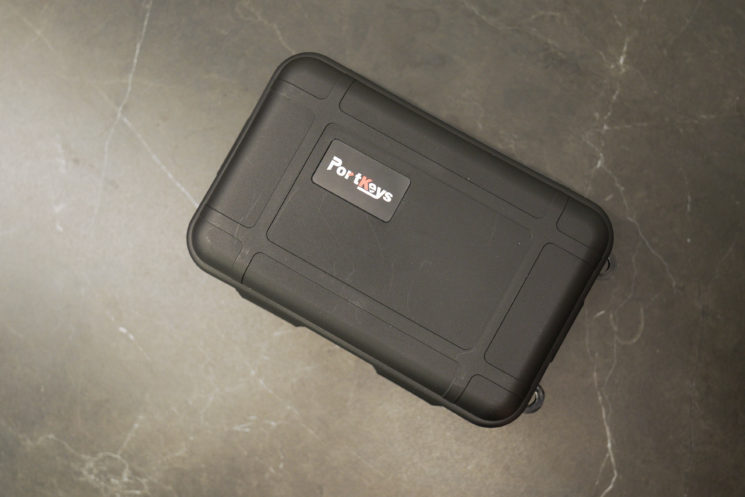 The monitor is made entirely out of aluminum. It is incredibly light, given its size. I would say this is a welcome feature. I will be doing my tests on both the Pocket 4k and the A7III. So for me, I want to keep my rigs as light as possible.

You have all your controls laid out on top. You can find four customizable function buttons, a nicely sized on/off switch, and menu controls. The menu controls are a nice touch. I noticed you could choose to lock the touch function if you only use physical buttons to navigate the monitor.

The glass is pretty reflective. However, As long as you’re not in direct sunlight and avoid reflection, it shouldn’t be a problem. Although, the monitor is nicely covered edge to edge with the glass. So there’s a nice premium feel to it.

The monitor has a bunch of ports all around. Firstly, you have HDMI in and out. In between them, you have a headphone jack for monitoring audio. Honestly, I think it’s a weird position. I don’t usually monitor audio from my monitor, but I assume that it might be hard to jam a headphone jack in there if you were using both HDMI ports.

On the bottom of the monitor, you have your remote port. Portkeys offers an array of cables you can choose from when you order your monitor. The connectivity of the monitor is one of the most attractive features of this monitor. Look how diverse this is! You’ll also find there is a USB-A port for loading up LUTS. Our unit included a USB with both the operation manual and a bunch of conversion LUTS preloaded. I like the idea of connecting a full USB stick to your monitor. I think it’s more convenient than loading it on to an SD.

To the right, you have a DC jack. I’m not familiar with this type of cable. It looks like a Weipu cable, but it has five pins. I was kind of bummed about that. Especially since there is no AC adapter, just a DC adapter, this means you’ll need to find something with a DC output to power your monitor (either a battery or an AC power brick).

At first glance, the monitor seems pretty accurate. And to add to that, there is even a list of options for customizing the monitor if you feel like you can improve it. You can adjust brightness, contrast, chroma, sharpness, tint, and color temperature. For me, out of the box looked great. You can also adjust the backlight from 1-100.

Viewing angles are as expected with a high-quality IPS panel—no visible color distortion regardless of viewing angle.

I have reviewed a lot of monitors here on DIYP. Also, I’m used to not only what I own but what I work with in the field. So every time I pick up a new monitor, there is a learning curve to take into account. I’m on the fence with this one. I’m sure that if you play with it as your main monitor, you could master it. The monitor uses swipe gestures to navigate the monitor. Don’t get me wrong, once you’re on the menu you need, everything is super straight forward. But getting there can be a trip sometimes. For better or worse, this monitor has many functions, and remembering where they are and which way to swipe was challenging. 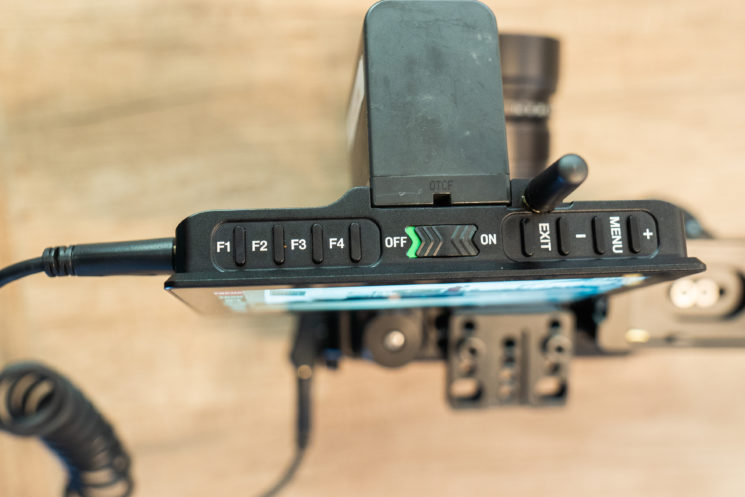 The monitor has the ability to show you battery voltage, which I much prefer over icons or percentages. My only gripe with this is that it only shows up on one particular screen. From what I’ve gathered, there’s no way to keep the battery level on display. This brings me to my next point. The menus are not overlayed. This means that unless you sacrifice screen real estate, you have to choose between seeing the menu items or not. On a five-inch monitor, I would rather have as much as I can at all times.

This monitor can do your standard set of tools. Here are a couple of interesting ones for me.

One thing to note here that bothered me. Turning on features like Waveform, peaking, and zebras will create a short blackout on the monitor. It really is just a second, but it was noticeable for me. 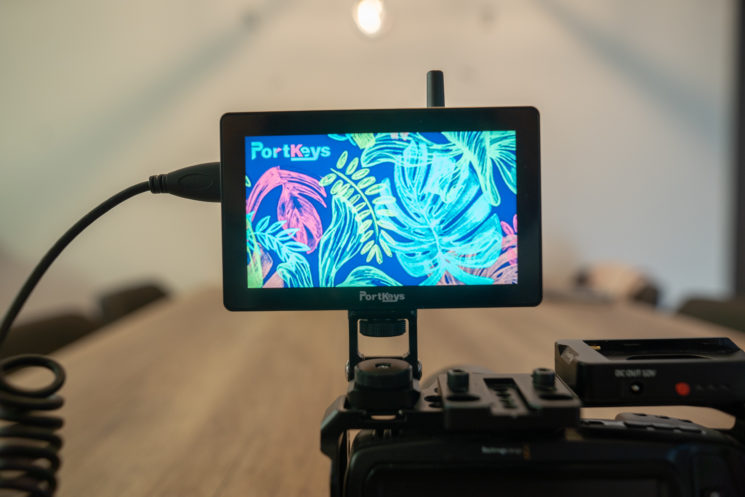 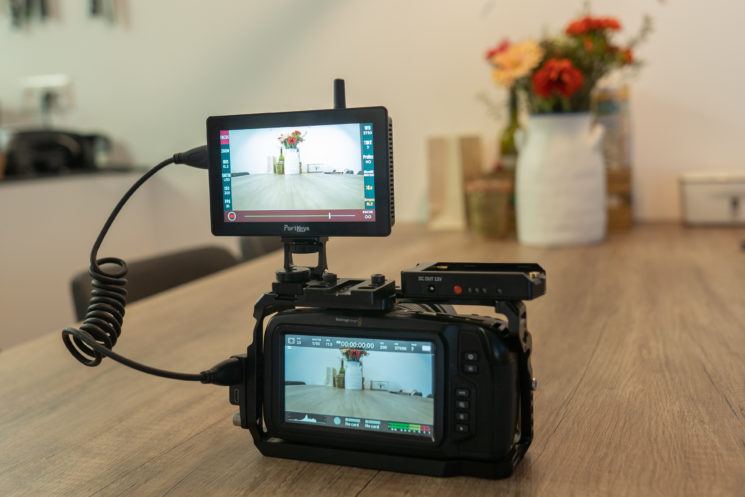 As you saw in the picture, this monitor can connect to a lot of things. Here is my experience with my A7iii and my P4k.

The P4K connection was flawless. The connection is wireless. All you need to do is dial in the code on the camera to connect. From there, you can change all settings, including frame-rates and camera settings like aperture, shutter, and ISO, and even adjust focus (if the lens supports it). Everything works incredibly snappy and with a minute delay. I wouldn’t pull focus with it, but it can definitely help.

The sony was a slightly different story. I think it’s sony’s fault, though, not Portkeys. I found it hard to connect the camera control to the monitor. There’s a bunch of hidden information in the camera that makes it hard to get the connection to work. Once the connection was able to work, I could control the camera settings from the monitor. Only one problem, I had no image on the screen. For some reason, the only way for me to get an image on the screen was to try and adjust focus (my lens didn’t support it either). Once the warning dialogue came up, the monitor received an image. Your mileage may vary.

It’s basically on par with what you’d expect from a monitor this bright and this small in terms of battery life. A single NP-F550 battery got me about an hour and a half of power. I think it’s slightly more than my Ninja V, which usually gets me about an hour and change with the same battery. However, I guess that it probably has something to do with the difference in brightness. With that being said, bonus points to Portkeys, though. I noticed that when you are using the camera control functionality in the sony, the monitor will actually charge your camera. I really enjoyed this feature because the downtime in changing the monitor battery is usually much smaller than changing the camera battery.

The monitor has active cooling. Which is fine; a lot of monitors do. And to be fair, the entire time I’ve used it, it’s gotten hot. However, it has never automatically ramped up the fan. My only concern is that if you manually ramp up the fan, it gets noisy. The fan is so loud. Worst than that, it’s not a consistent hum or something; it’s random. It’s loud enough to the point where if I needed sound, then I have to close the monitor. My guess is the type of fan that’s in there is the problem.

Overall, the monitor checks a lot of boxes. It is a powerful and affordable monitor. In some cases, the monitor even extends the power of your camera. I am really excited to take this monitor with me on my next handheld shoot with the P4k. Given all the functionality, I think the shortcomings are justified. If you want to give the monitor a shot, you can buy it from Adorama or directly from Portkeys for $399, including your choice of cable per camera. 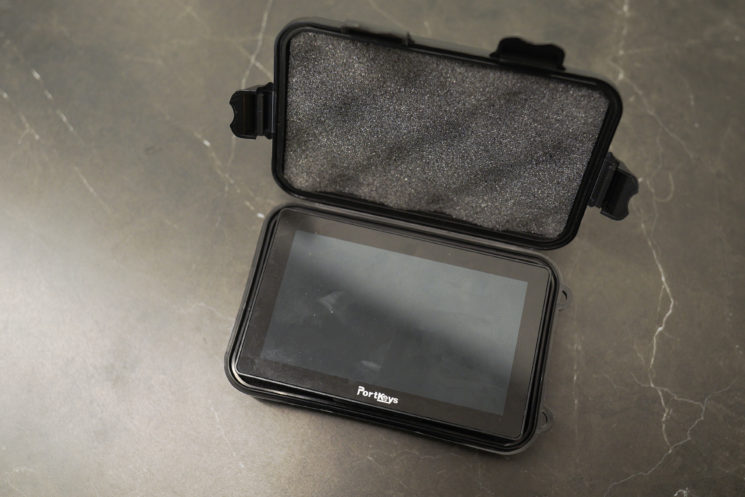 This tech controls drones by following your eyes