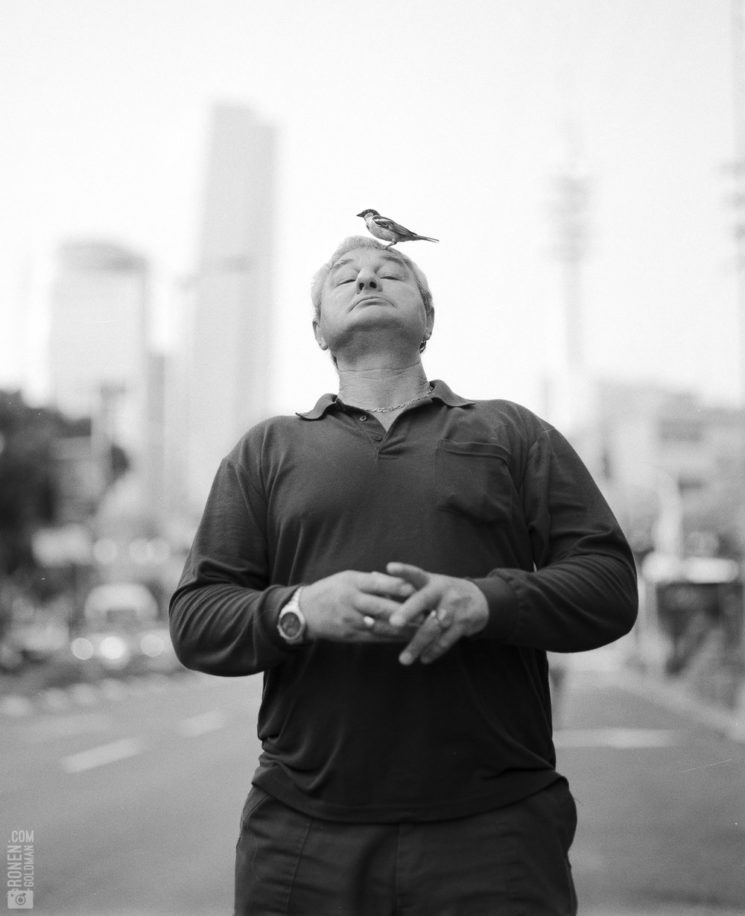 It was an early Tuesday morning, and I was sitting in a car with a friend of mine.

We were going over some papers for a project I had in mind.

While my friend had his eyes buried in the papers and text – mine started to wander outside.

Leaning on the wall outside was a pretty big security guard, who was staring into the distance.

Suddenly, out of nowhere a bunch of sparrows swarmed him, some landing on his head.

I hunched forward not really understanding what I was looking at.

He raised his head and opened his mouth slightly.

When he was done, he flew away and another sparrow took his position- pecking ever so slightly at the man’s mouth. 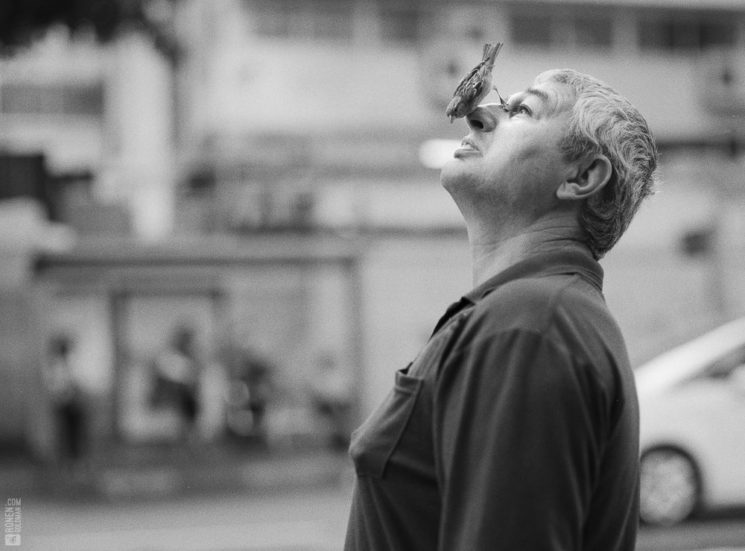 The street all around was buzzing as usual- while it seemed to me that I was either hallucinating or something extraordinary was happening.

I’ve seen pigeons land and eat from people’s hands- but I have never seen sparrows go anywhere near a human being, let alone have such a close and intimate relationship.

These birds and this man seemed to trust each other completely, like old friends. 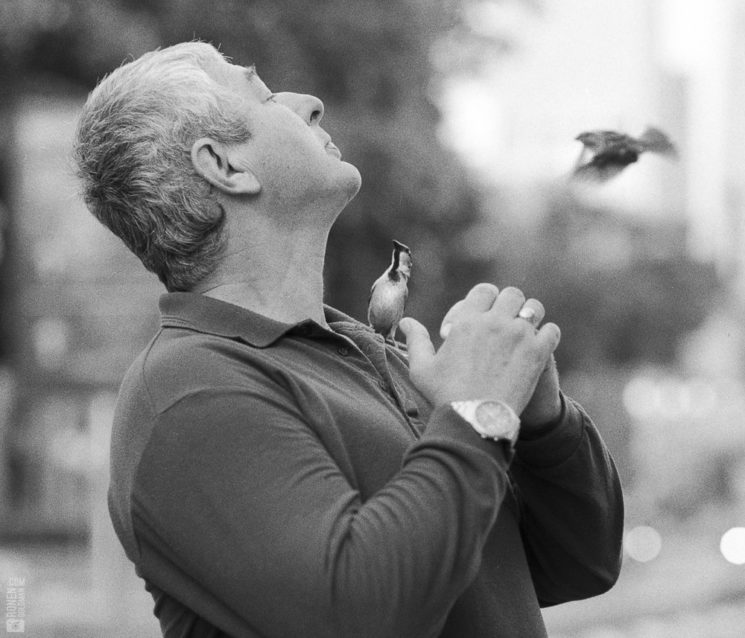 I nudged my friend ,and pointed at the man.

It was all so strange and gentle, this big man with these tiny birds swirling around and swooping in, landing so delicately on his face. 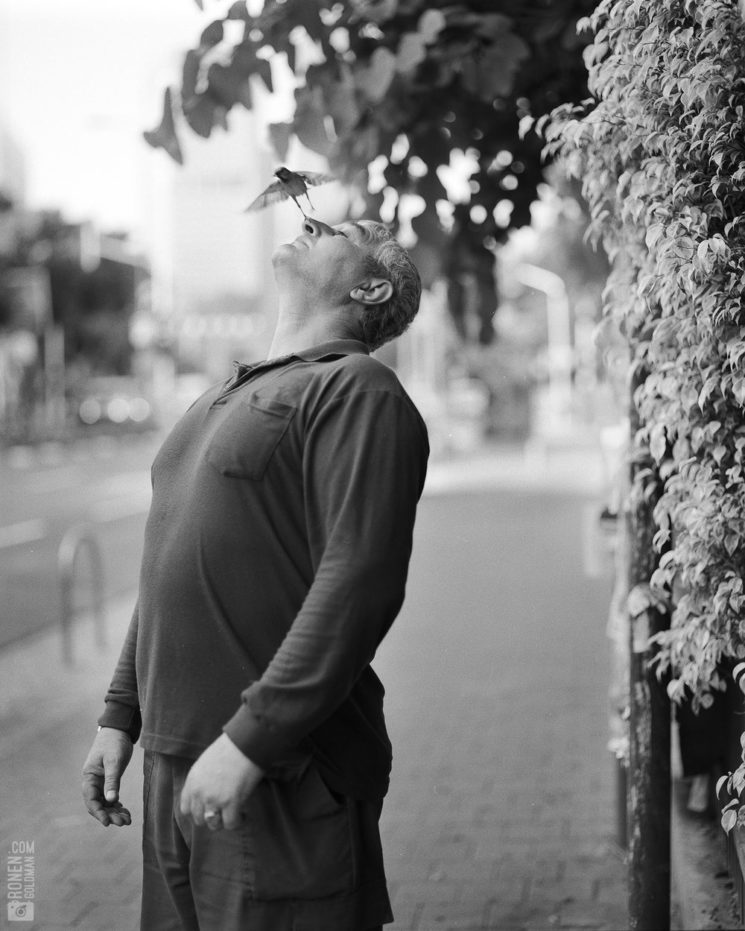 I am no journalist, but I felt I really wanted to know this mans story.

I’m also not one to simply walk up to people I’ve never met and start conversations – let alone a person that seemed to be communicating with nature and his surroundings on a whole other level.

But it was just so beautiful.  I knew I had to make photographs of this. Somehow. 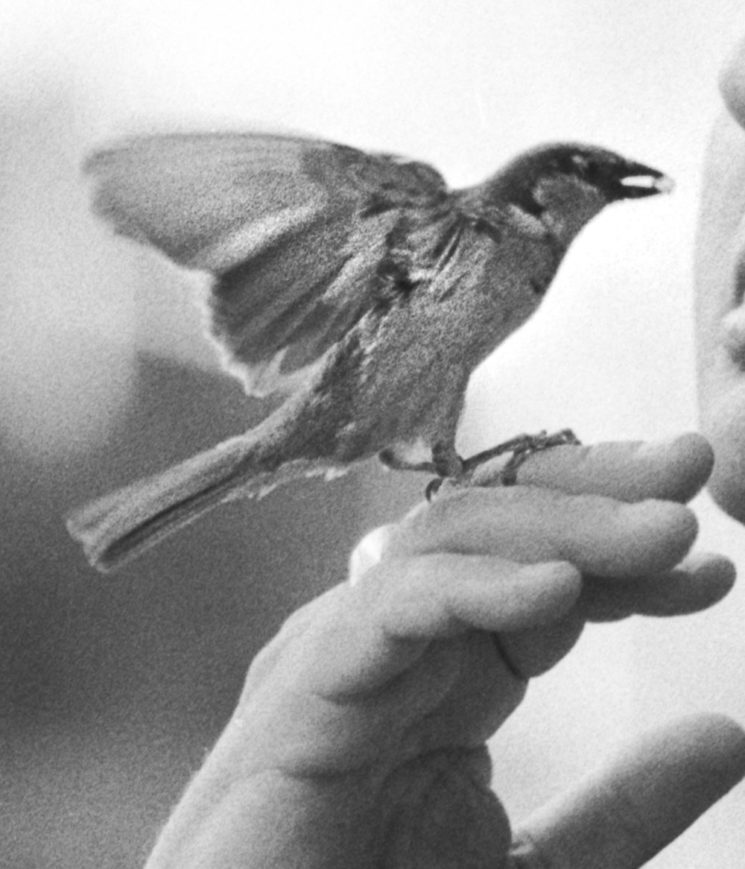 I introduced myself and he greeted me with a huge smile. We talked a bit, and I asked him if I could come by sometime and take pictures of him and his birds.

He said: “Sure, come here early in the morning before I start work, that’s when they usually come out”.

He proceeded to stand at his post, and I noticed that almost every person passing by him was either smiling at him or to themselves.

The following week I came back, this time with my trusty Medium Format film camera, the pentax 67ii. Every roll in this film had only 10 frames, so I would need to be quite precise with the timing of the shots. 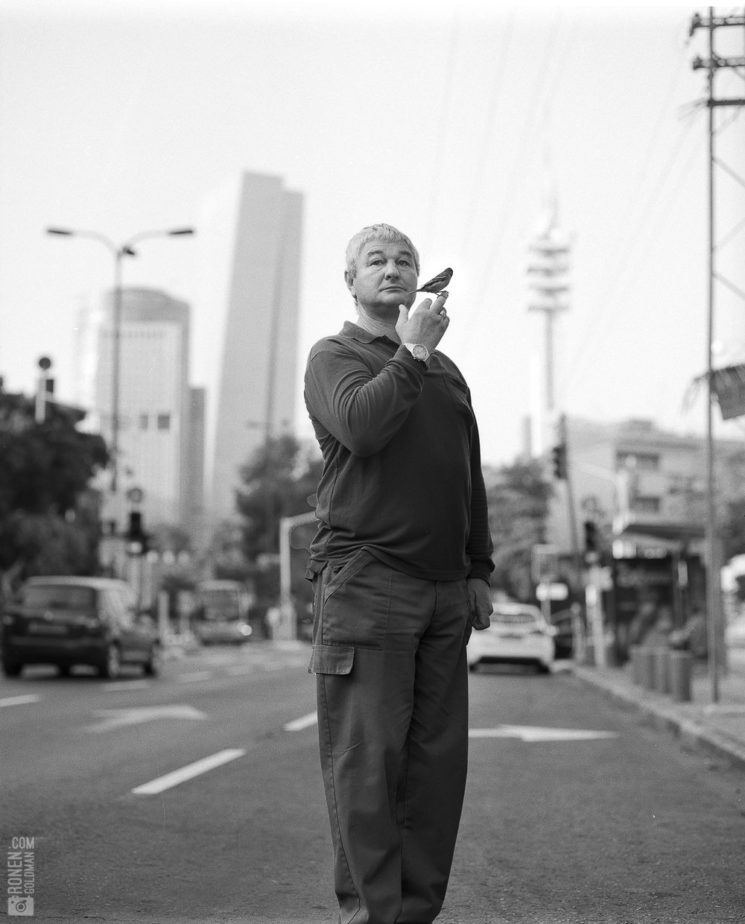 Eddie seemed really happy to see me, pointing to the electrical wires above , where some birds were perched.

While we were waiting for the birds to make their move, we started talking. I asked him how is they are not afraid of them, how was this all even possible.

He told me the story of how he came to the country many years ago as a tourist, but then decided to stay. He had no money or place to live-  he was homeless.

He would sleep on the streets and work in the outdoor marketplace disposing of the garbage at the end of the day.

He explained that he couldn’t get a better paying job since he didn’t have a proper official address to list on applications.

While living on the streets, he would feed any animals he ran into- birds, rats, cats, whatever lived around him.

He simply loved them all, and shared with them whatever he had.

Over time a sparrow started hanging around him more and more, getting closer and closer. 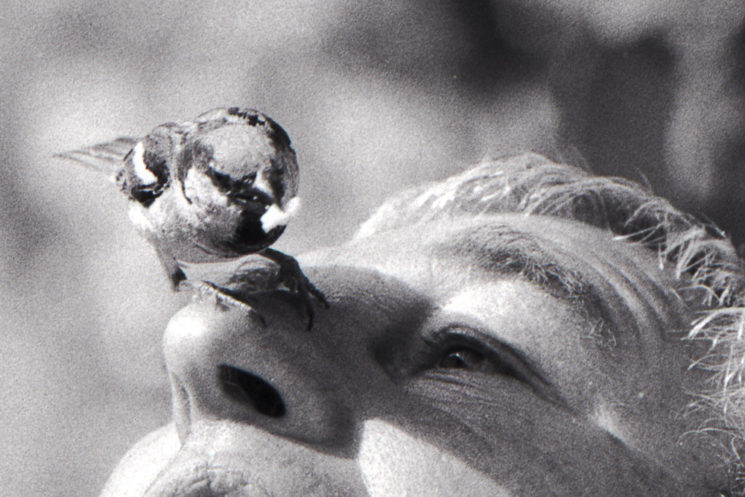 After a while one of the other workers on the garbage team offered Eddie to simply use his personal home address if he wanted to apply to other jobs. So he did, and got more steady work.

All the while, he would become good friends with the sparrow, who would visit him pretty regularly for the next six years.

Suddenly, Eddie stopped talking – took a few steps back, and crushed a cookie and put some of the crumbs in his mouth. 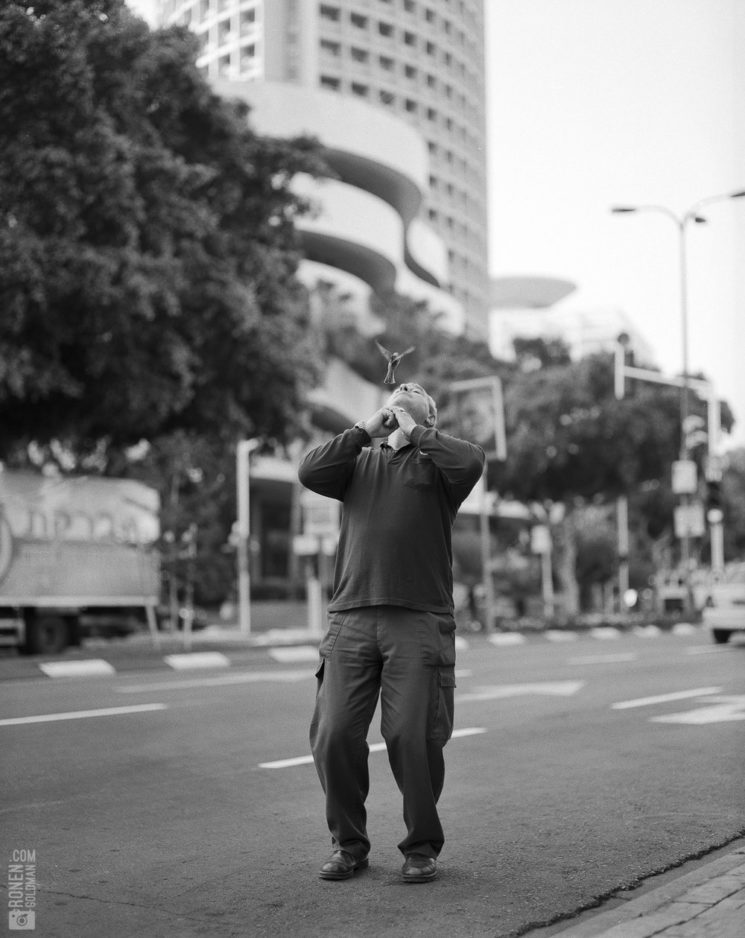 Three small birds descended from above, two of them landing on each shoulder and one on the top of his head.

He bent his head slowly backwards and the top bird took tiny steps across his face, quickly grabbing some crumbs from his mouth.

They all flew a bit around him, and then landed again, changing places. 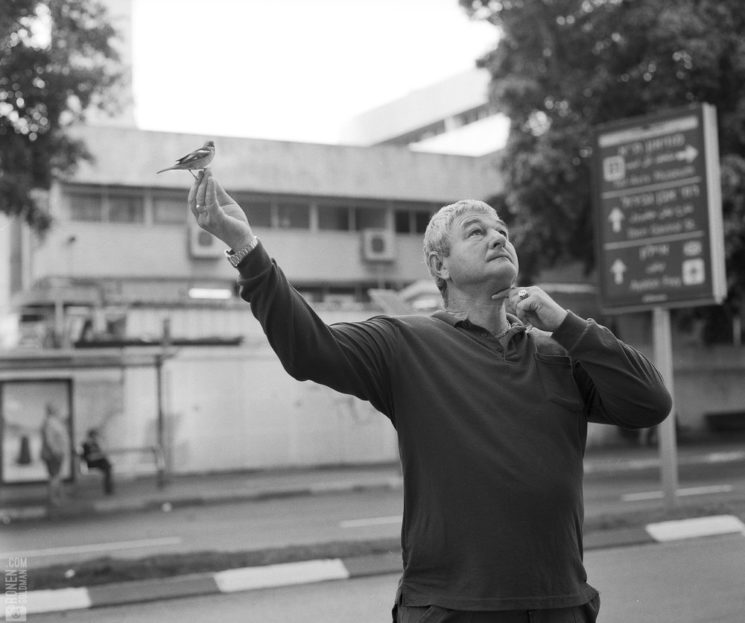 This went on a few more times, and while I was taking pictures, I was trying to gauge how close I can get without spooking them.

They flew back up to the wire above.

“Have you given them names?” I asked.

Eddie let out a deep sigh, his face changing from a beaming smile, to something else, a lot more somber.

He went on to tell me that after six years, the original sparrow came to him again one day, but this time something was wrong.

“He was walking ‘funny’ and seemed tired, I realized he came to say goodbye”.

He said that after he fed him, the sparrow landed on the ground and kind of walked away.

He found him later, just a few feet away.

“I buried him over there” Eddie pointed at a spot not far from us. 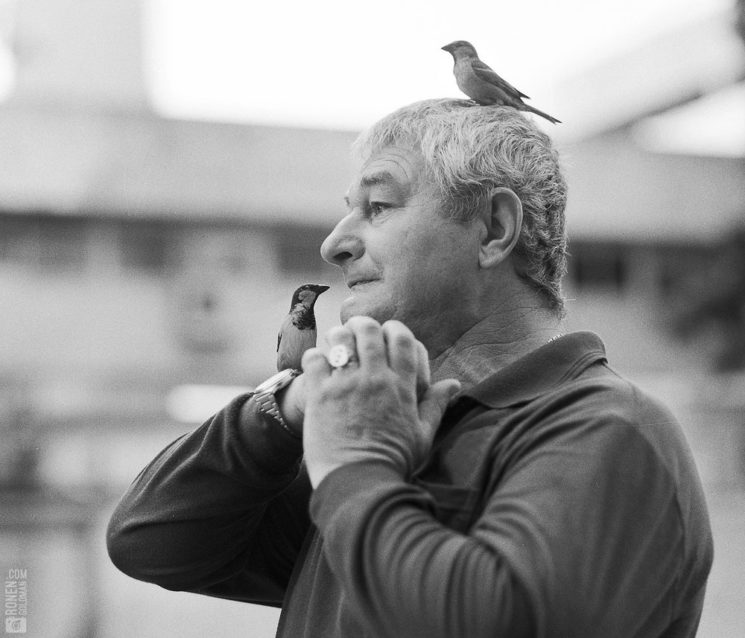 The birds came back, this time there were more of them, and a few pigeons too. The pigeons only really ate from the floor, while the sparrows circled Eddie’s head.

“You know, they recognize me from afar. I thought they only knew it was me when I stood around here, but when I come up the street they are all over me.”

His eyes scanned above.

He went on and told me he thinks some of them must be the children of that original sparrow, but that he didn’t really know.

“You know, people think sparrows are dumb, they really aren’t. they talk to each other, that’s how they know I am Okay” 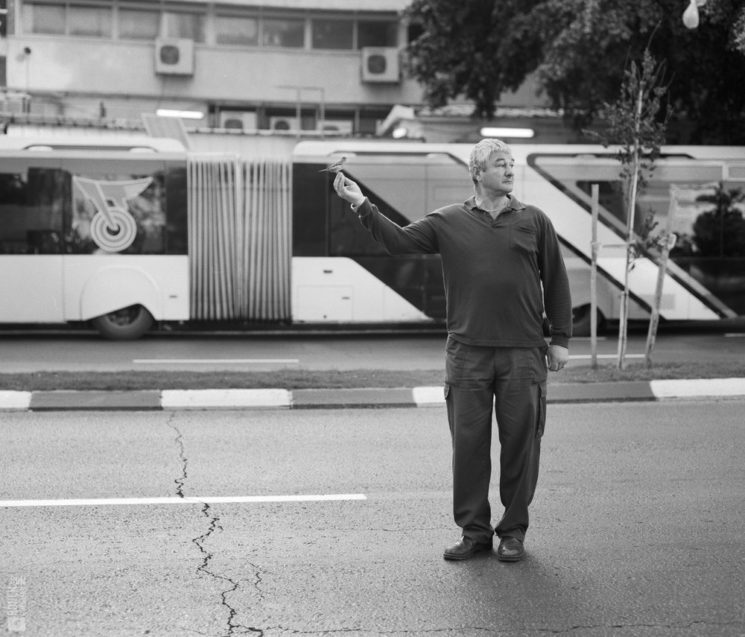 “Sometimes before work I practice boxing” he said and started swinging his arms quite violently and precisely punching an imaginary foe.

“But the birds try to land on me while I do it, they have no fear of me.” he said. “I worry that i’m going to hurt them by accident, but they are very determined.” He shrugged.

I kept on taking pictures, trying to figure out how he knew when they were going to descend, and where exactly to stand.

Eddie went over to a certain point in the road, put his hands together and stood very still, as though he was becoming a tree.

The birds swirled around and ate.

Then, at once, they were gone.

“All animals are born, you know? They deserve to live”. 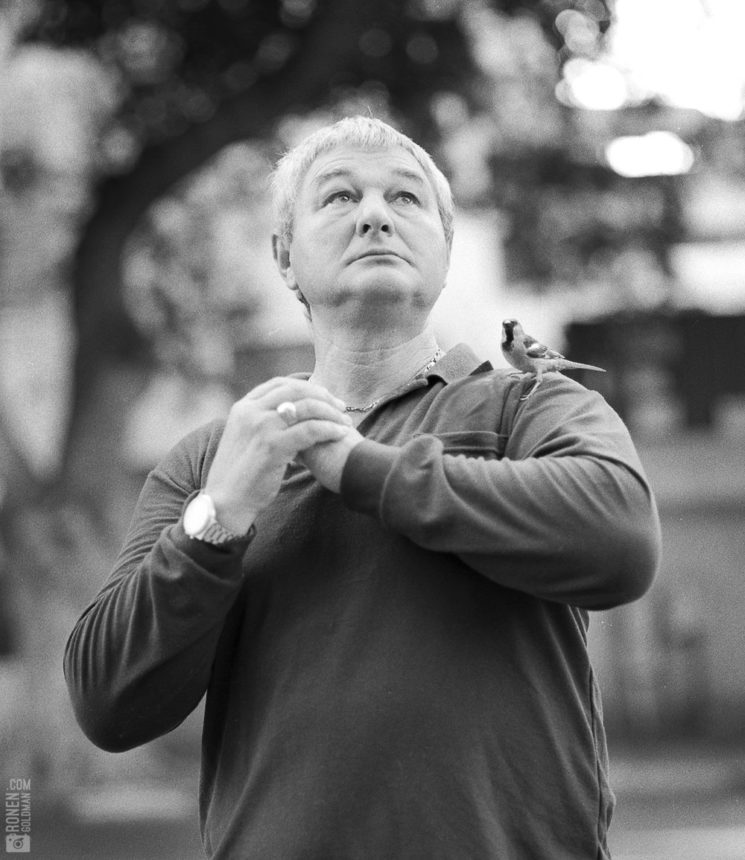 A few weeks later, after developing and scanning the photos- I came to meet Eddie.

I presented him with a framed collage of photos I had taken of him with the sparrows.

He was so excited- showing it to all the people coming into the building with pride.

“You should come over to my house some time” he said. “I also play the guitar and wrote a book of poems in Hebrew, but I had to use a dictionary”

When planning the shoot, I deliberated if I should also bring my digital camera- just to be sure I can take as many shots needed to catch the birds and Eddie doing their unique ‘dance’.

But then I realized this was a relationship of man and animals that seemed timeless, and as such should be captured on a timeless medium- film.

All these years taking photos brought me to this point in time in which it was time to trust my ability and take a chance- that even though I would really only get one chance at this, I should just go for it.

Ronen Goldman is a commercial photographer and cinemagraph creator based in Tel Aviv, Israel. In both his commercial and personal projects, his goal is to convey stories, breathe life into concepts and externalize emotions through images. You can find more of Ronen’s work on his website and follow him on Instagram. This article was also published here and shared with permission.

This surreal video turns Iceland into another dimension