Well, this is an interesting one. One of the big highlights of the Canon EOS R3 was that out of the various Canon “firsts” it was celebrating, one of them was a brand new Canon BSI stacked CMOS sensor. All of the promotional material from Canon UK even said “designed and manufactured by Canon”. This wording seems to have changed, though.

Now, the wording on the Canon UK website now simply reads that the sensor was “developed by Canon”. And an interview between Russian photography website PhotoWebExpo and Canon Russia’s Head of Product and Consumer Expertise, Andrey Tischenko suggests that while Canon may have designed it, it might just be Sony that’s making it for them. 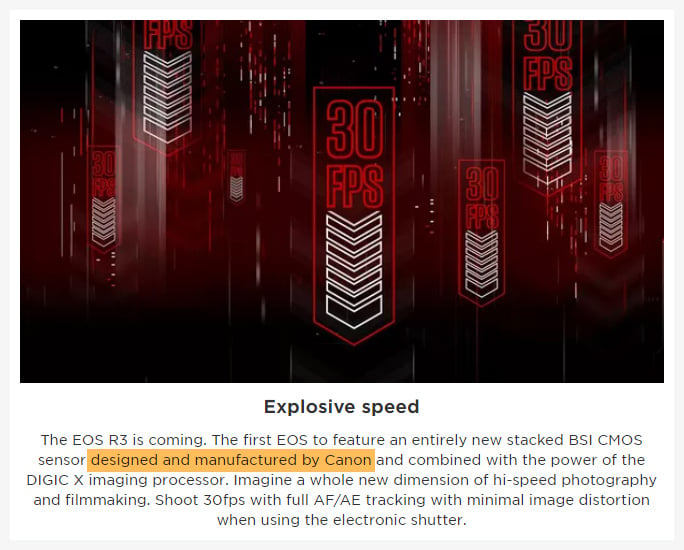 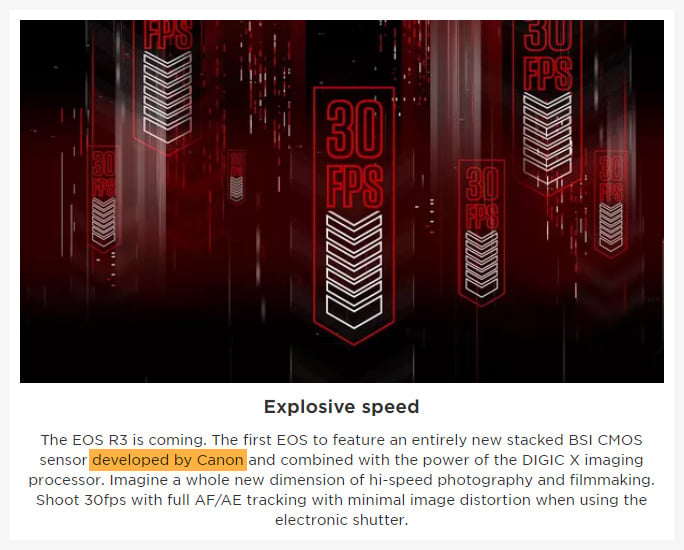 If true, it doesn’t come as much of a surprise. Sony is very experienced with BSI stacked sensors, having produced a great many of them. During the Interview, Mr Tischenko was asked about the sensor, and if this is was Canon’s first stacked sensor.

The sensor is new because we have already stated that this is the first backlit Stacked Sensor BSI we have developed ourselves. Accordingly, this is a completely different matrix than in the Canon EOS R5.

Full-frame format yes, but in fact, one of the most popular compact models in the PowerShot series, the Canon G7x Mark III has a 1-inch Stacked CMOS sensor. That is, such technologies have already been applied in our cameras, but it is the Canon EOS R3 that will receive the first full-frame sensor of this technology.

As noted by the folks at Canon Watch, though, the sensor in the Canon G7X Mark III is actually made by Sony. So, if they’re touting that as the leading example, then is the sensor inside the EOS R3 also going to be made by Sony? The question was pretty explicit, “is this Canon’s first stacked sensor?” As in, a sensor made by Canon. Not “Is this the first Canon camera to contain a stacked sensor?”, so I feel the answer is a little… evasive, or at least misleading.

While Canon does manufacture their own sensors and nobody doubted the initial Canon UK claim that it was a “designed and manufactured by Canon” sensor, the wording change on the Canon UK website does suggest that it’s not them that’s making the sensor that will go into the EOS R3.

Of course, it wouldn’t be much of a surprise to find that Canon is having Sony make the sensor, too. Even Sigma has temporarily abandoned their own full-frame Foveon sensors in favour of Sony Bayer sensors in the Sigma fp and Sigma fp L to get cameras out quickly.

Mr Tischenko also confirmed in the interview that the EOS R3 is not intended to be a flagship camera. It does not replace the 1DX Mark III, but sits above the EOS R5 and below the 1DX Mark III. And while he didn’t specifically mention an impending EOS R1 release, his wording suggested that it would definitely be coming at some point. He refused to comment on the APS-C Canon EOS M product line.

It’s an interesting interview with some good insights into Canon’s plans, even if you have to read a little between the lines for some of it. You can read the full interview on PhotoWebExpo.

No, Sony is not making the Canon EOS R3 Sensor – Canon is