Following from last year’s announcement that they were raising 440 billion yen (nearly $4 billion) to further development and production of new sensor technology, Sony have started to reveal the fruits of their labor with the announcement of their new IMX318 sensor.

Aimed squarely at the mobile devices market and with a pixel size of only 1.0μm, they’re able to pack an impressive 22.5MP into a sensor that has a diagonal of only 6.858mm.

Boasting a more compact size, greater image quality and higher performance, the IMX318 is the industry’s first to be equipped with built in high-speed hybrid autofocus system, able to lock on to a subject as quickly as only 0.3 seconds.

It also contains 3-axis electronic image stabilization for video, which is capable of shooting up to 4K at 30fps, and 1080p at up to 120fps.

Sony have also said that despite the new sensor’s smaller size, there is no drop in image quality from the IMX318’s predecessor, the IMX230, used in devices such as the Motorola Droid Turbo 2 as well as Sony’s own Experia Z3+.

Sony plan to start shipping out to manufacturers in March 2016, so hopefully we’ll start to see and use it in phones not too much long after. 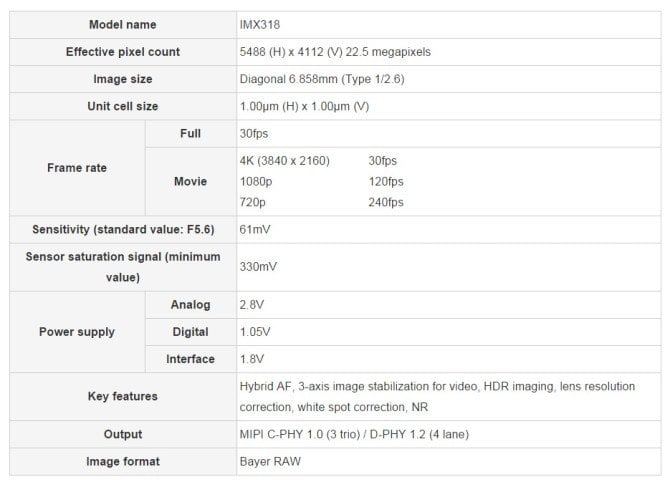