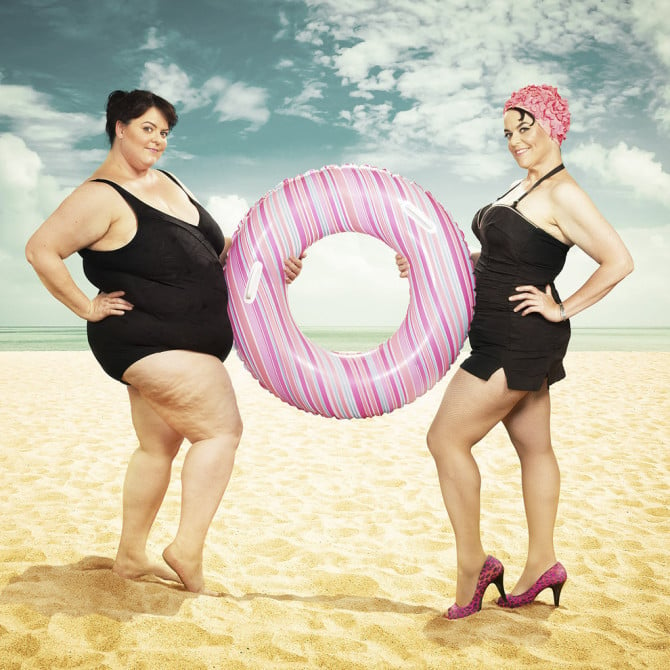 When a visual comparison is in order we are likely to end up seeing the same boring side-by-side set of photos showing the old and the new, but it doesn’t have to be so boring.

When Blake Morrow’s Friend Beth decided to undergo gastric bypass surgery, he created a series of portraits with the “before” and “after” Beths digitally integrated to interact with each other.

The pop culture-inspired portraits, presenting Beth 150 pounds and two years apart, are Blake’s way of celebrating his friend’s journey and inspire others.

“We shot “before Beth” a few weeks before her surgery. 2 years and 150 pounds lost later, we took her into my studio and photographed her “After” self. I then took about 4-5 months to work on the selection and compositing process, pulling the 24 Beth’s I chose from the shoot into 12 interactive portraits. We shot in my studio for both “before” and “after”, and then I added the environments in Photoshop during my compositing process. I hired some awesomely talented friends of mine to do the clothing styling and make-up and hair styling based on the concepts I had developed”.

Editing the project took another 4-5 month, in part due to the fact that it was done on the side when Blake wasn’t doing his normal day-to-day client work. This process included selecting the best images of each shoot and the combinations which would best tell Beth’s story. Despite being a cumbersome task, he said it was very exciting. 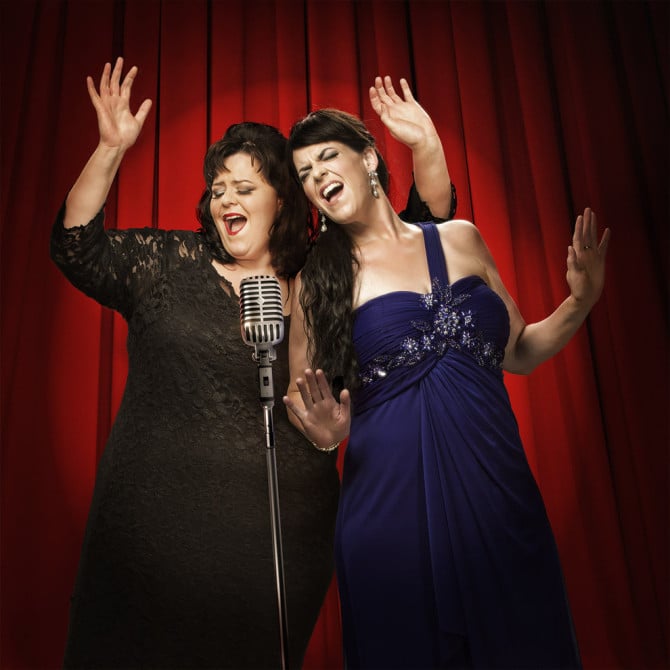 “It was really about managing 24 versions of Beth and making sure they all came together in a unified way!”, Blake told us, adding that Beth made his job easier by being the perfect muse to photograph. “She was fearless and was able to take advantage of her theatre background to bring drama to the shoots!”. 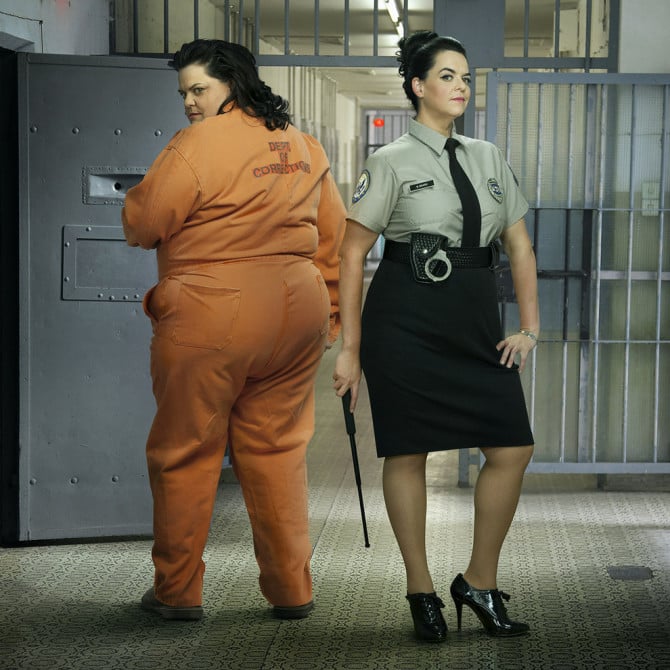 Towards the end of our email interview Blake explained why “Prison Beth” is his favorite image:

“I really love the Prison image. Who doesn’t love a curvy woman in a pencil skirt? The contrast of the steely tough “before” Beth (a prisoner, one might say, in the physical circumstances of her own body), with the confident and agile “after” Beth, full of poise and self-confidence, really speaks to me. Ultimately, though- I really love them all. Beth’s theatre background brought a depth to all of her photos, conveying some pretty fun and vulnerable emotions”. 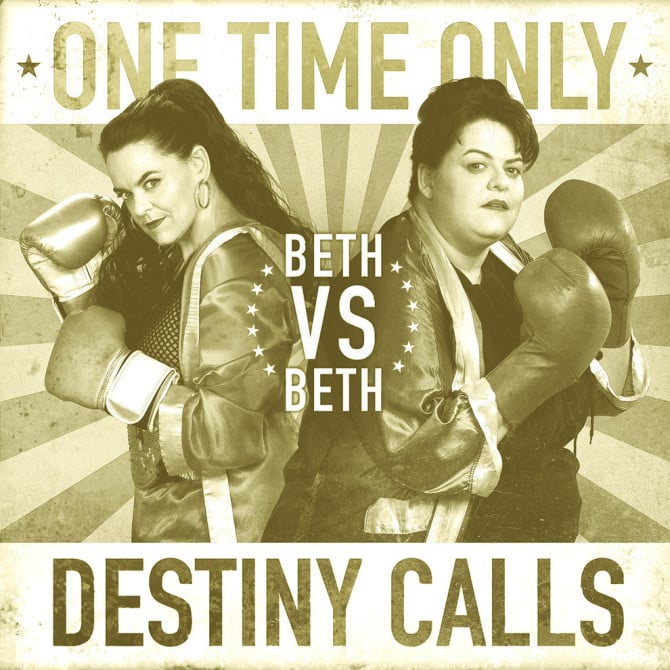 Blake and Beth hoped that these photos would encourage others to reach for their own personal best, and said that they have already been contacted from people all around the world who are in the midst of their weight-loss journey or were encouraged by this project to start it.

“In order to properly communicate and celebrate Beth’s accomplishment”, Blake’s website states, “her body shape has not been digitally altered”.

This is not a given, especially since the photo itself has been so heavily photoshopped, and Blake said he’s really proud of Beth for committing to the imagery and allowing herself to be seen in some less flattering angles as well.

“It’s very human, and we can all relate”, he said. “None of us are perfect, after all”. 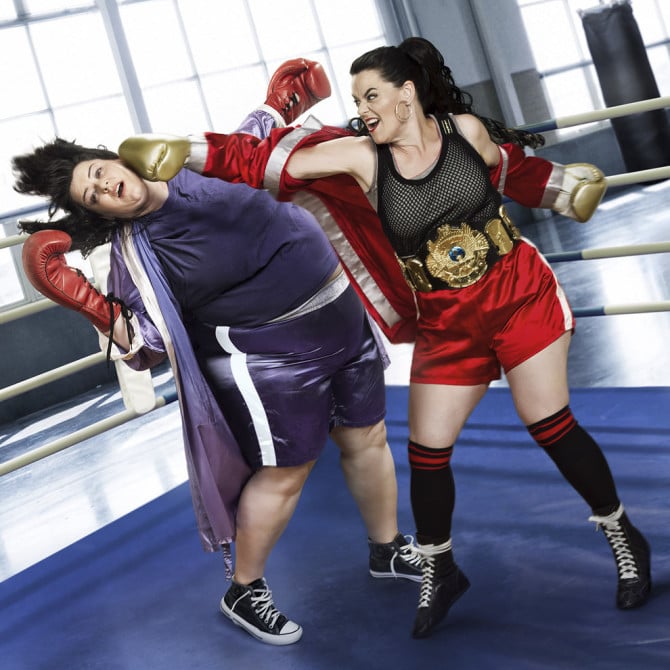 Now that he’s done with this series, Blake said he’d love to shoot the same process with a male subject. “I’d also really like to get connected with NBC’s “The Biggest Loser” and do something similar with all of their contestants for their next season!”, he added. 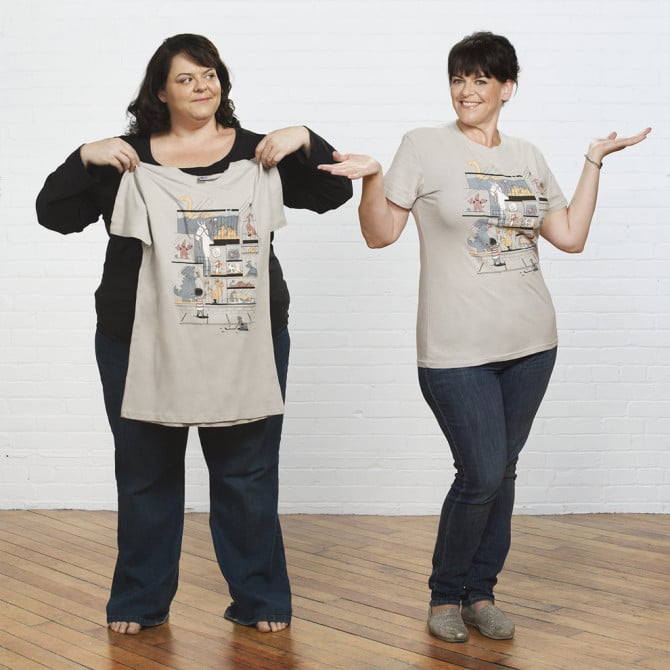 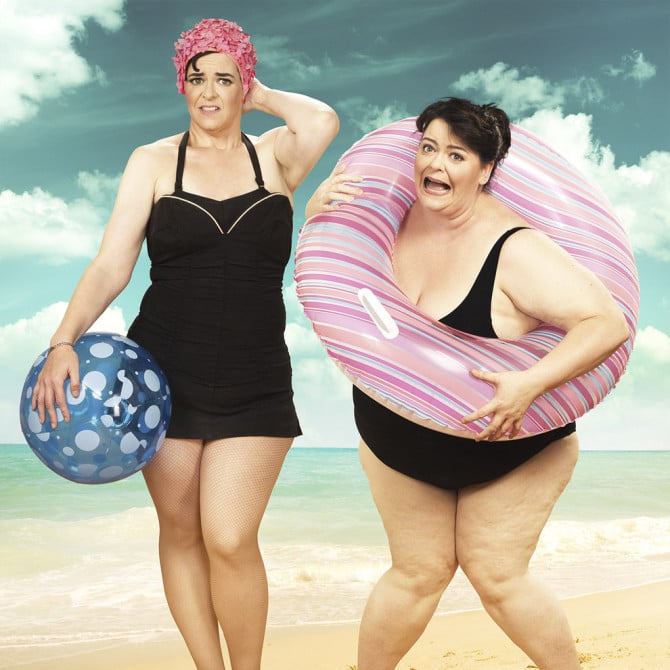 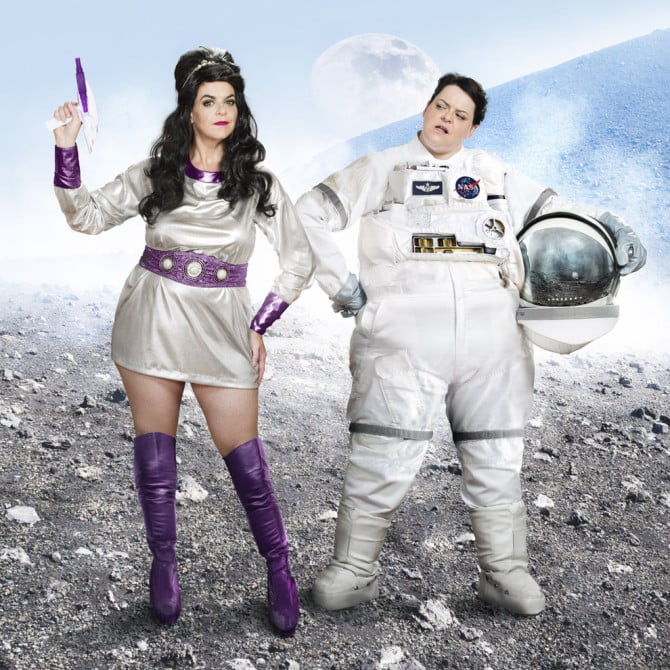 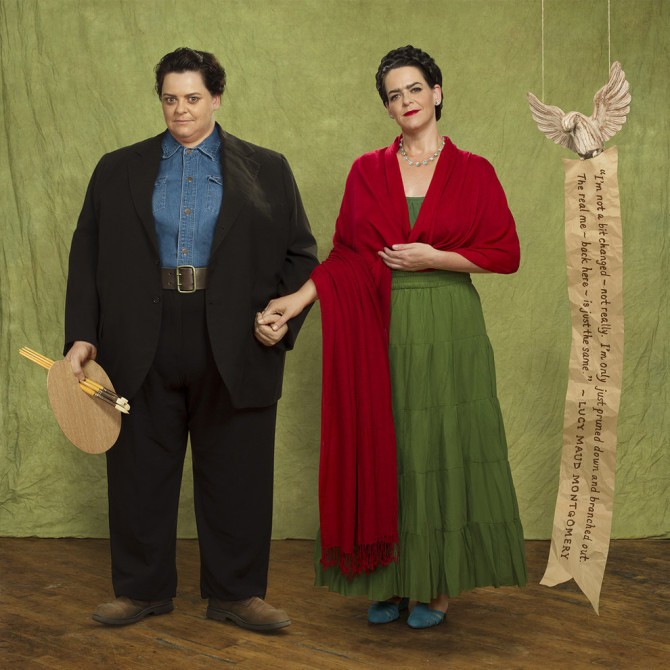 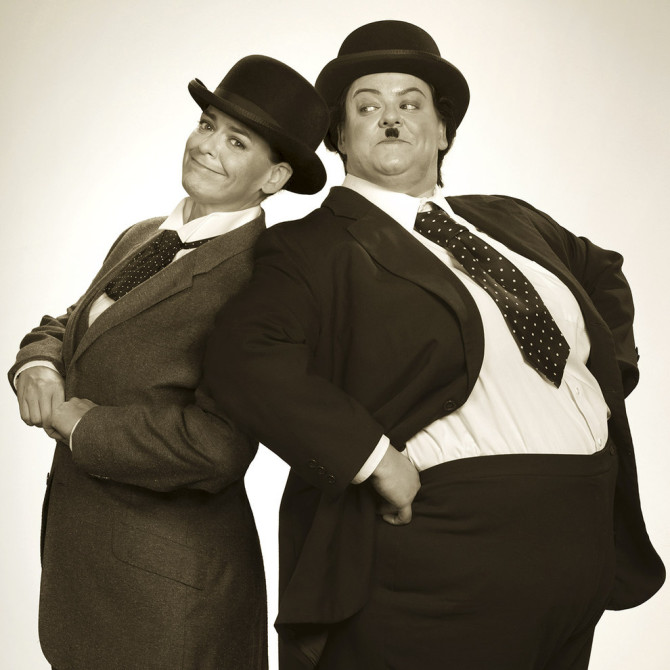 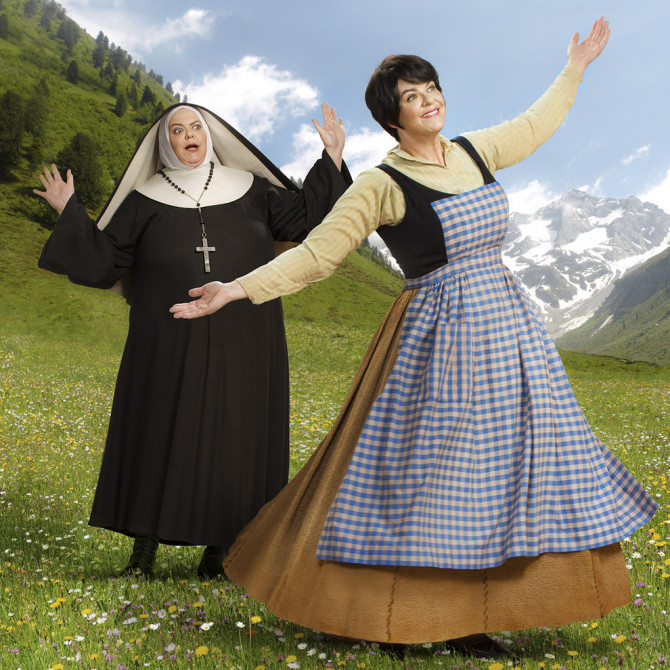 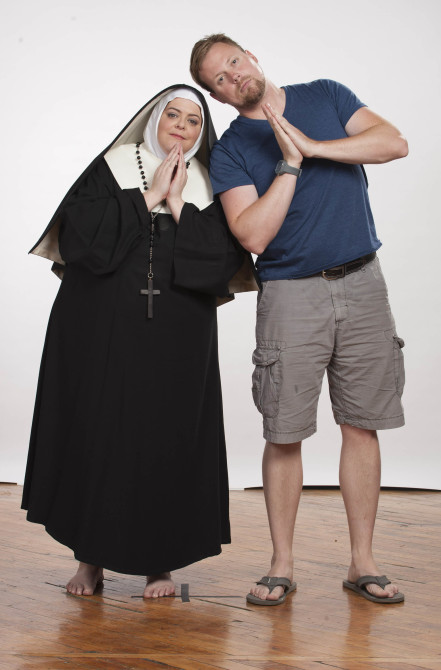 During the “before” shoot 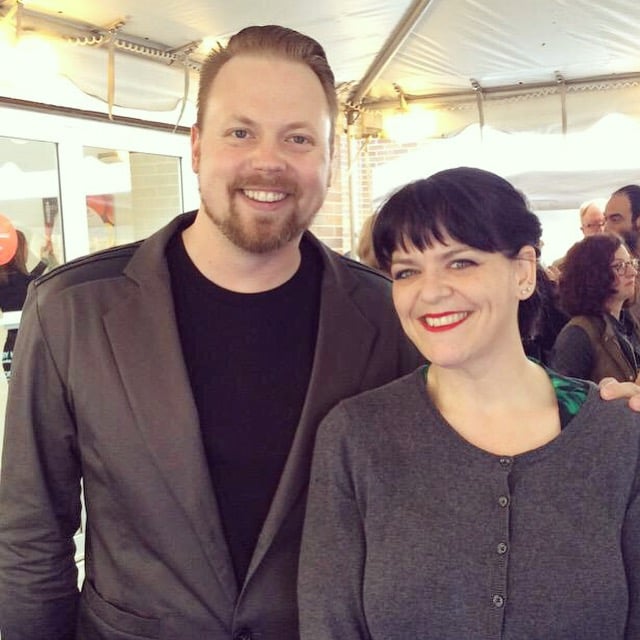 Blake and Beth at the opening night of the Contact Festival

How To Build A Super Sturdy Tripod for 30 Pounds